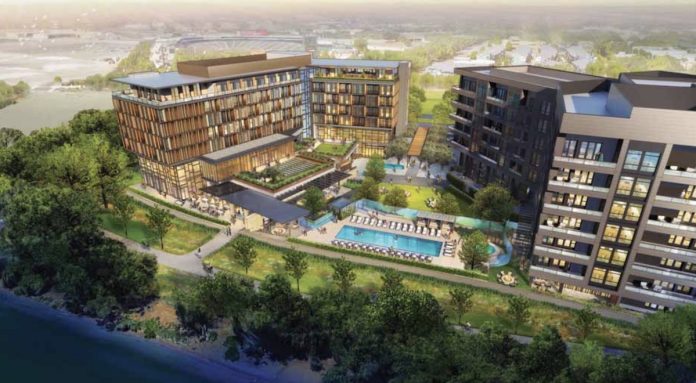 A mixed-use project along the riverfront in West Sacramento hangs in the mix after it was initially approved in December of 2019. The project, which was proposed by local developer Fulcrum, would include the construction of two seven-story buildings with hotel and condominium space.

According to the City of West Sacramento, the project, referred to as River One, remains on the boards and was initially intended to be completed in 2022. However, the project site currently sits undeveloped.

Should the project take shape, it would be located near Tower Bridge Gateway and 3rd Street and include the construction of a 193-room hotel and 57-room condominium project. In total, the project would encompass 249,309 square feet.

The hotel  building would account for 135,991 square feet of the total space and would also feature several amenities, including a restaurant, co-working spaces, a concierge area and more.

The condo building reaches 106,318 square feet of space and features a mix of one-, two- and three-bedroom housing options, including several penthouse units.

SB Architects is responsible for project designs, which feature two L-shaped buildings separated by a center amenity courtyard complete with a swimming pool, a restaurant space and plenty of landscaping throughout. The two buildings would also sit above a shared parking garage.

The design also includes connections to the already developed Sacramento River Walk, providing landscaped pedestrian and bicycle pathways to allow for easy access to and from the planned development.

The project is part of the Larger Bridge District, which sits between Tower Bridge and Highway 50. Fulcrum is responsible for a number of projects at the 60-acre district. These include The Park Moderns, a 32-unit single-family home community, which was completed in 2015; the Habitat Apartments, a 96-unit boutique multifamily community; and the Barn, a 6,000 square-foot canopy that provides space for local retail and dining along the riverfront.

“The Bridge District represents one of the most extraordinary development opportunities in the region. Located along the riverbank in West Sacramento, the site offers unparalleled natural amenities amidst an urban setting. Many years of intricate public/private collaboration have yielded meaningful planning advances, and the foundation is set for the creation of a modern city center embodying smart growth principles,” Fulcrum states on its website.