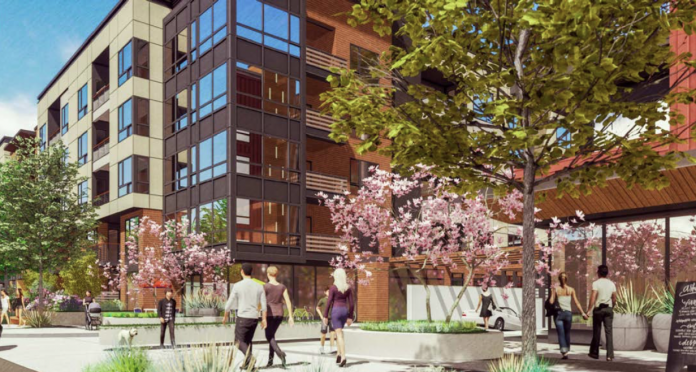 One of the real estate industry sectors that has fared relatively well across the region since the start of the COVID pandemic has been multifamily. Along with the industrial and life science products, multifamily developments have generally garnered strong interest from buyers for one main reason—lack of supply. This may be one of the reasons why Borelli Investment Company and Los Altos-based Dutchints Development just placed on the market a fully-entitled Los Altos residential development project on the market with an asking price of $60 million.

Los Altos is one of the most desirable communities in the Bay Area, and a development project that is entitled for 172 condos and 24 townhomes, including 28 affordable housing units, is rare and likely promises to generate interest from the development community. The 3.8-acre site is located at 5150 El Camino Real, and it presently includes a ~80,000 square foot commercial building that will be delivered vacant once new ownership takes over. The plans call for an almost even split between one and two-bedroom units in the condo portion of the project, while most of the townhomes will have four bedrooms.

The property was acquired by Dutchints in 2018 for $48 million, or just over $623 per square foot based on building size estimates at that time, per The Registry’s earlier reporting. The seller at the time was Boston-based TA Associates Realty, which in turn purchased the property in February of 2014 for $25 million. Even at the time of the last sale, Dutchints was considering turning the project into a high-density residential development.

According to a recent, Northern California Multifamily Market Report | Winter 2021 by brokerage firm Colliers, the Los Altos submarket of Silicon Valley, which the firm groups with Mountain View and Palo Alto, saw the third largest decrease in occupancy year over year, coming in behind downtown San Francisco and West San Francisco. A subsequent decrease in rents in the submarket came to 16.1 percent. While these figures are for rental properties in the market, they do directionally speak to the effect of cost of living in high priced cities in the Bay Area.

Even with that analysis, Colliers recorded the largest sale of the second half of 2020 by cost and per unit in Mountain View/Palo Alto/Los Altos submarket. Summer Hill Housing Group paid $81 million, or $698,275 per unit, to acquire the 116-unit Meadowood Apartments.

There was a glut of new supply that hit the market in 2020 during an unprecedented period of depressed demand, states Colliers. More than 14,000 units delivered across the region in 2020 compared to -4,000 units of demand (net number of units occupied).