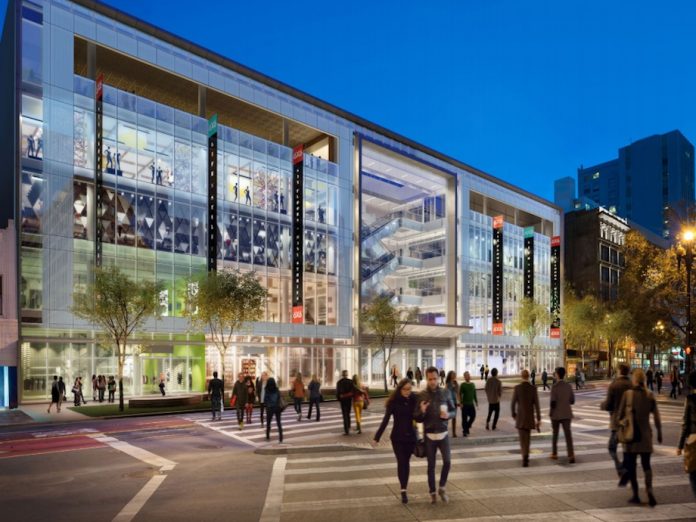 Cypress Equities, the developer of a newly completed Mid-Market retail, food and entertainment center called the 6×6 is looking to convert a portion of its retail space into office space after struggling to find tenants.

The Gensler-designed development, located at 945 Market Street, is the largest completed development between 5th Street and 9th street. The 6×6, another name for the project, is also one of the largest retail development projects in San Francisco in nearly two decades since the Westfield Mall opened in 1998. The project is located in the bustling Mid-Market retail corridor and is ideally situated in between Union Square, the Hotel District and San Francisco’s South of Market (SOMA) neighborhood.

Dallas-based Cypress Equities began construction of the site in 2014 and had hopes of having tenants lined up by the time construction was completed in 2017. With a lack of interest in retail tenants, converting the existing retail space into office space is a logical and necessary next step.

The retail market has clearly gone through significant change over the past few years. As such, we as a landlord need to adapt to the changing nature of retail.

“The retail market has clearly gone through significant change over the past few years,” said Chris Maguire, the chief executive officer for Cypress Equities. “As such, we as a landlord need to adapt to the changing nature of retail.”

The past year has been anything but gentle on brick and mortar retailers as online shopping becomes increasingly popular and profit margins for brick-and-mortar stores continue to shrink. In 2017, two dozen major retailers announced sweeping store closures across the United States. Walgreens’, Rite Aid, Macy’s and various other retailers plan to close thousands of store locations in the coming months. Other name brand retailers such as Radio Shack, The Limited and Payless have filed for bankruptcy.

“We have been approached by retail users that would also require office space for their business, which we are currently not permitted to do,” continued Maguire. “We also believe that a mix of uses can complement the overall project as office users will drive a daytime population that will use the building retail and restaurant businesses.”

Currently, 945 Market Street contains 264,440 square feet of retail space spread throughout floors one through five and includes 175 vehicle parking spaces and 50 Class 1 bicycle parking spaces in a sub-grade parking garage. The parking garage, which opened in March 2017, has been the building’s primary source of revenue due to lack of retailer interest in leasing the space.

Companies from a variety industries in San Francisco are showing strong demand for centrally located Class A office space. Both social media giant Twitter and software management company Zendesk are headquartered in the Tenderloin neighborhood, while AirBnB’s office is located in the Design District, also in close proximity.

According to Maguire, no leasing agreements are formally in place because Cypress Equities has only recently begun marketing the potential office spaces. However, the office spaces have generated considerable interest among both retailers new to the Bay Area and local and regional businesses. Cypress Equities is also looking for tenants who will complement retail users in the building and draw consumers up to the Mid-Market area from Union Square.

“Our hope is that we can merchandize the building so that it appeals to the demographics surrounding the property as well as the tourist market,” said Maguire.

The current timeline for the approval process is unknown. While the City of San Francisco did not return a request for comment, Maguire believes the changes will continue to move forward.

“We had several meetings with the city to discuss this change prior to submittal,” offered Maguire. “They support the change of use and we are working with them through the process.”