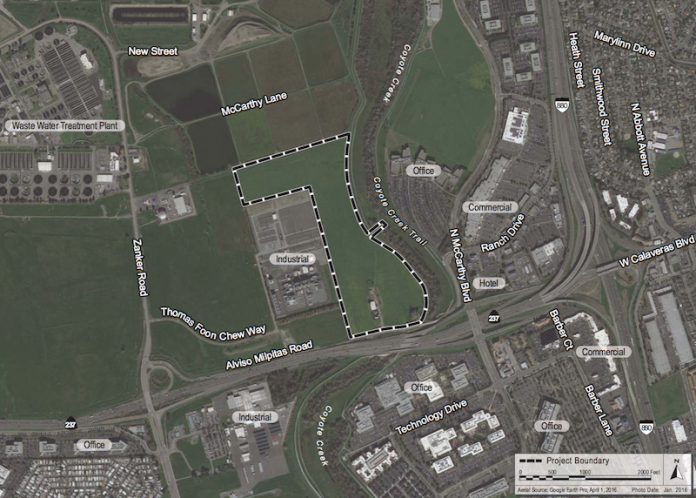 A 64.5-acre land parcel north of Highway 237 between Zanker Road and Coyote Creek in San Jose is mostly fallow farmland with some farming structures and three residences. The property’s owner, Cilker Orchards Management Group has submitted a development application to the City to potentially construct light industrial and data center facilities on the site. A public comment period for the draft environmental impact report is currently underway and will end on July 17. An EIR scoping meeting is scheduled for June 9.

“The application and EIR process eventuates two options for future development,” said Erik Schoennauer, land use consultant and representative for Cilker Orchards. “The light industrial use would likely be warehouse or distribution centers under that option. For the second option the data center is a possibility and would collectively be a distribution plus data center, which are uses with solid fundaments in the Silicon Valley market. The EIR and rezoning of the property would allow either option to proceed. We will decide which option to pursue after the development approval process. It’ll entail interacting with the marketplace and selecting the best option or a combination of them.”

According to Schoennauer, Cilker Orchards is a longstanding, family owned commercial real estate developer and property manager with deep roots in the local community. Cilker Orchards was originally founded in 1965 as an agricultural company and is the sole initiator of the present development proposal. Sheenan Partners has been preparing the project design for City analysis.

The project is located within the Alviso Master Plan area and is currently designated as Light Industrial under the General Plan and is zoned Agricultural Planned Development. A rezoning to Light Industrial is required for both development options.

“There’s not a lot of development in the area around the project site yet,” commented Mendrin. “The old landfill site is just west of the project site at First Street and Highway 237; now there’s some office uses and a hotel. Another hotel has been approved but not built yet. The project would complement what’s on the other side of 237 in North San Jose.”

The property is just south of the Bay and is surrounded by a mix of office, industrial and commercial uses in other directions, as well as some vacant parcels. Development is being undertaken on a speculative basis and no potential tenants have been identified, however, Microsoft Corporation is listed as a billing applicant in planning documents.

“I think overall it’s an enormous opportunity for the City of San Jose to expand its industrial base and tax base by 64 new acres,” Schoennauer said. “Right now the land is fallow agricultural; as of today it’s basically vacant land and not generating jobs or tax revenue for the City. There aren’t many 64-acre parcels in the city. We’re hoping City Council will be enthusiastic about this when they hear about the project this fall.”