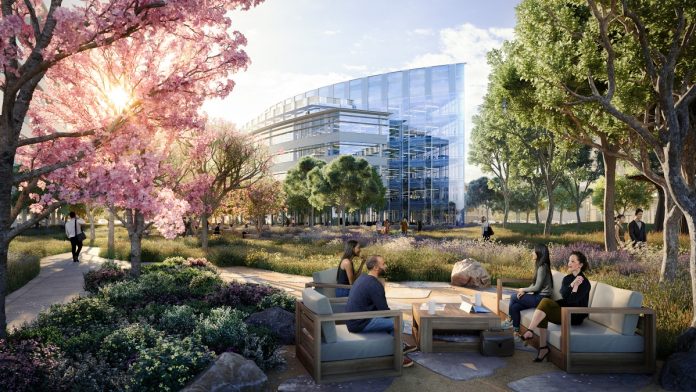 DES Architects + Engineers is both the architect and landscape architect on the project, according to plans submitted to the city.

The project is located at 320-410 Blomquist Street, 19 Seaport Boulevard and 15 and 30 Stein Am Rhein Court, just east of US Highway 101.. Plans include the construction of one seven-story building and two six-story buildings totaling 765,000 square feet, a 35,000 square foot employee amenities building and 2,551 parking spaces within a single parking structure and surface parking.

The site is currently vacant except for a construction office that fronts Blomquist Street and consists of eight parcels that previously included the former Malibu Raceway and Golf Course, a gasoline service station, and other building supply and light industrial uses.

According to the project’s website, Harbor View will contribute to a number of initiatives related to housing, youth and transportation. Through a partnership with St. Francis Center, Harbor View will provide 64 units of affordable housing. The project will also donate $13 million to the city to fund the construction and rehabilitation of fields, parks and open space. Harbor View will also construct enhanced pedestrian and bicycle improvements in the Inner Harbor to complete a safe, planned segment of the Bay Trail.

During a November meeting, the Redwood City Council approved a number of items related to the project, including a resolution certifying the environmental impact report, an ordinance approving an amendment to the zoning map, an ordinance approving a development agreement between the city and the developer and a resolution to approve the vesting tentative map and the architectural permit.

Originally, the project proposal that was introduced years ago was for a 1.1 million square foot campus across four buildings, each of which would have been seven stories, a 35,000 square foot employee amenities building and 3,855 parking spaces provided across two parking garages and a surface parking lot, according to city records. Based on feedback, the applicant revised the project application multiple times until arriving at the current proposal that was recently approved. A skating rink that was part of an earlier draft was replaced earlier this year to provide additional surface parking use and proposes to reduce the parking garage by one story.