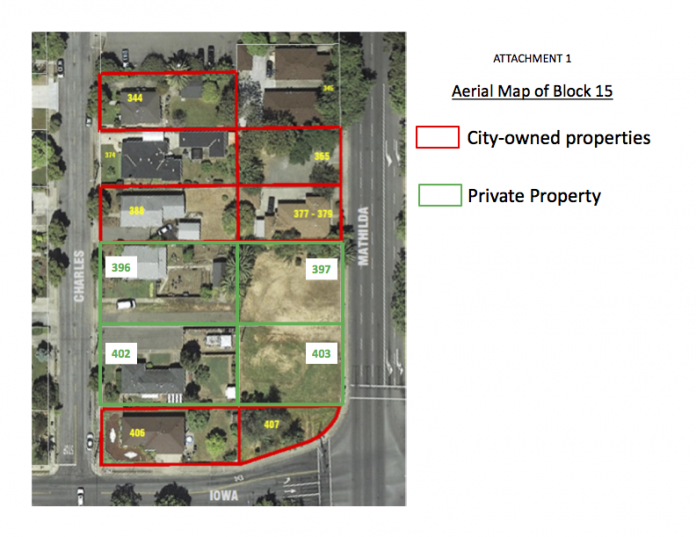 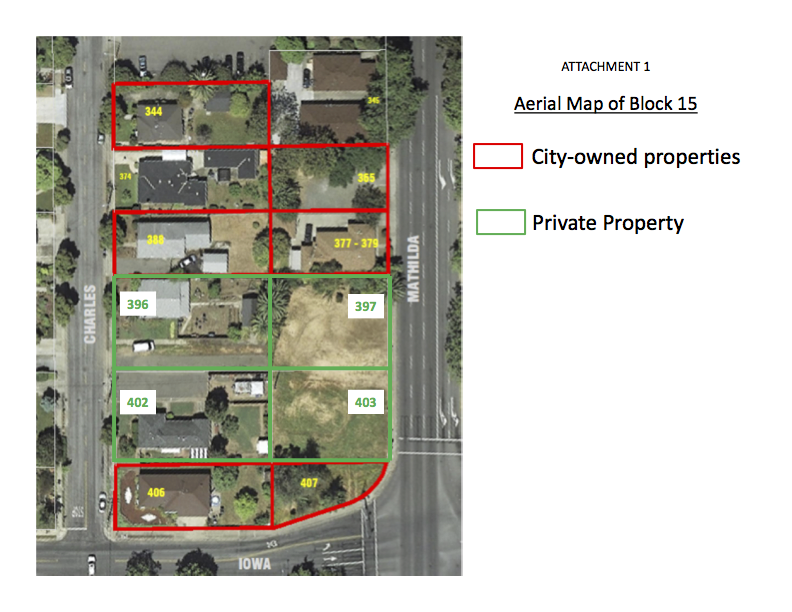 Sunnyvale City Council voted 5-1 on Tuesday, July 14 to approve the purchase of four properties in its downtown district.

The acquisition on Charles Street and Mathilda Avenue, located in the same lot as six other properties the city owns, ropes in most of the 3.4-acre block for the city. The city has appropriated a budget amount of $4.6 million for the purchase and closing costs of the properties, as well as relocation expenses. Toll Brothers, which is selling the property to the city, will be splitting the closing costs with the city.

“It will be interesting to have more discussion going forward where the city is in a position of ownership of a significant block within the Downtown Specific Plan,” said Councilman David Whittum. “I think there’s quite a lot of interest to see the downtown move forward.”

Nested in “Block 15” of Sunnyvale’s Downtown Specific Plan, a 20-year development effort by the city, the area is currently developed with low-density units, and the Downtown Specific Plan allows for high-density multi-family/commercial mixed use. Several VTA bus stops are alongside the properties on Mathilda Avenue, with the Sunnyvale Caltrain station located a few streets down.

Council members did not discuss the exact use for the area Tuesday night to keep the property exempt from a CEQA environmental review. However, two citizens spoke up with their desire to see the area be used for affordable housing.

“As you are imagining what to do with this land think first of affordable housing,” said Marie Bernard, executive director of Sunnyvale Community Services. “It could be wonderful. Imagine the people who are cleaning City Hall be able to live close to City Hall.”

Pat Meyering was the lone dissenter of the purchase, stating concerns with the use of Toll Brothers as an intermediary. The councilman denounced the city working with a private company, which drives up the price for the property given the assumption that the area would develop into high-density units.

“The method we use to pursue this prop acquisition is flawed from the standpoint of Sunnyvale residents,” Meyering said.

Since working directly with the property owners is out the question after Toll Brothers moved in on the land first, the option is to either join them or leave. And the other councilmembers found the land too valuable to pass up. Glenn Hendricks responded, “The process we’ve gone through is the only process that was available to us to go through. We might have wanted other processes, but that is the only one we have.”

Hendricks added that with half of the block already owned by the city, it is important to acquire the contiguous parcel of land, which was the goal from the start. Right now, Sunnyvale should move forward with this piece of land with as much flexibility and creative freedom as possible, he said.

Mayor Jim Griffith concluded the discussion before the 5-1 vote, in which Councilman Jim Davis was absent.

“The best way to control our own destiny is to own this land and that’s what we’re talking about tonight,” he said. “We have the opportunity to turn that into something useful, vibrant, whatever that may be. That’s a definite benefit to the city.”