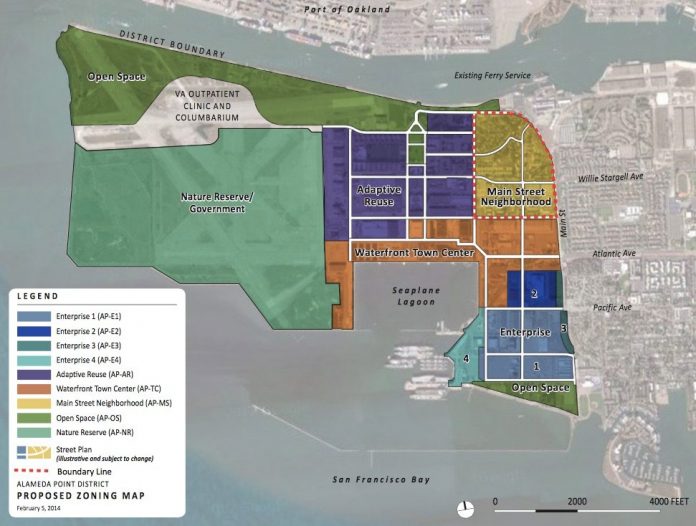 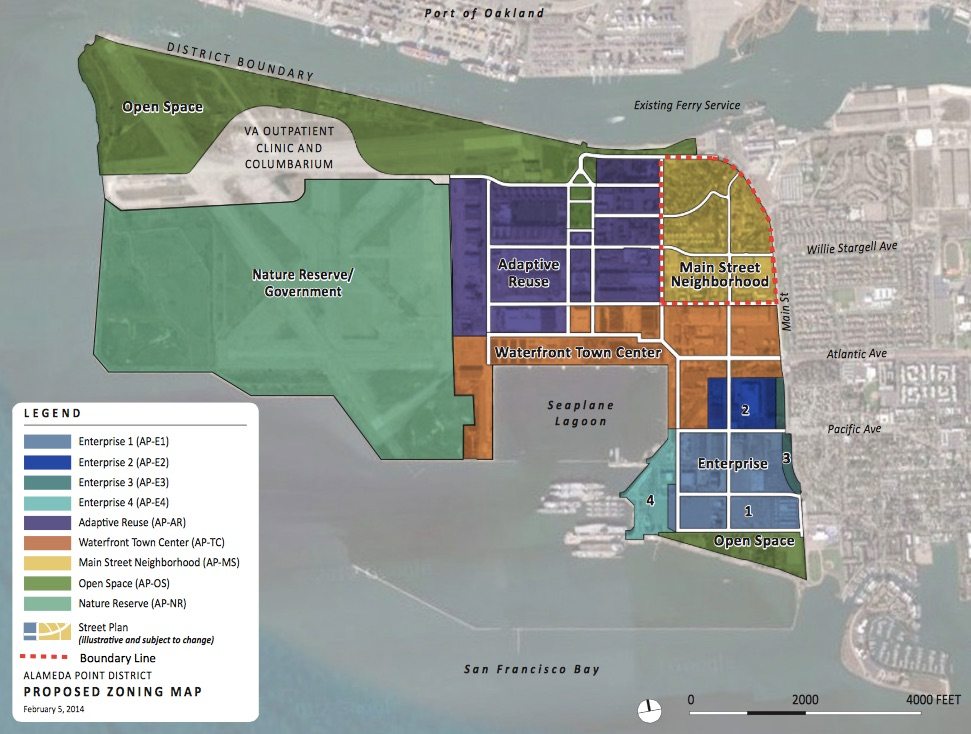 Grand ideas have come and gone for Alameda Point since the naval air station there closed in 1997. But one vision could finally reach actual ground work this year.

“This project will kick-start the redevelopment along the bayshore,” said Jennifer Ott, the city’s chief operating officer for Alameda Point. “It will replace 70-year-old infrastructure and create amenities, parks and job development. It will allow everyone to take advantage of the waterfront and the former base that’s been isolated from the rest of the community.”

In November, the predominantly local development team Alameda Point Partners won the right to exclusively negotiate with the city to hammer out formal plans that would build and finance the half-billion-dollar project on the parcel dubbed Site A, northeast of Seaplane Lagoon and west of Main Street.

The venture looks to break ground later this year just as Alameda and the rest of the East Bay are starting to capture much of the region’s technology-driven economic boom.

Alameda Point Partners sees Site A “as an exciting opportunity to get started during this current economic cycle of growth,” the group said in its statement of qualifications to the city in June. “We operate in a time-sensitive manner and do not see Site A as a ‘land-banking play’ but as a chance to take what’s essentially an entitled site and start implementing as soon as possible.”

Alameda Point Partners beat out several other developers to secure the exclusive negotiating agreement from the city, which will last at least six months.

According to a city staff report, the deal calls for Alameda Point Partners to pay approximately $108 million for Site A ($1.6 million per acre) with a credit of $88 million toward building infrastructure and another $5 million to expedite waterfront park improvements. That leaves $15 million for the city to be used toward construction of a sports complex at Alameda Point and a ferry terminal at Seaplane Lagoon, the report said.

The deal also gives the city a cut of development profits at an increasing rate starting at 10 percent as Alameda Point Partners begins earning at least an 18 percent unleveraged internal rate of return, the report said.

Alameda Point Partners proposes developing 800 units of townhomes, condominiums and apartments with some built within mixed-use buildings and 25 percent being below market rate. The group also would build up to 150,000 square feet of retail space and about 50,000 square feet of offices.

The project’s initial phase, which includes site preparation and a sewer-line extension, could start in the fall. Major construction would begin in 2016 with the project wrapping up in 2018, Ott said.

Total investment in the project would amount to an estimated $500 million. With Tricon, which currently has $2 billion of assets under management, as a financial partner, the development team said in its pitch to the city that it has the “wherewithal to fund Site A’s predevelopment costs and infrastructure and vertical build-out.”

So far, efforts to redevelop Alameda Point have come short, including a proposal by Irvine-based developer SunCal that would have built thousands of homes, a sports complex, a ferry terminal, parks and schools, but fell through in 2010.

But if the latest proposal moves forward successfully, the project would benefit from the surging economy that has made San Francisco and Silicon Valley the hottest markets in the world the past few years and has been spilling over to East Bay communities more recently.

“We’re hearing that commercial developers are looking for housing and transit availability, so that makes [Alameda Point Partners’ project] important for our community,” said Anne DeBardeleben, an agent of Harbor Bay Realty in Alameda.

According to Seattle-based real estate Web site Zillow, the median home value in Alameda is $740,400—up 5.9 percent over the past year—and is projected to rise 2.2 percent by the end of 2015.

A key acquisition in the quarter also occurred in Alameda with Brentwood Financial purchasing 121,957 square feet near the business park for $24.1 million ($198 per square foot) from the Titan Investment Group, Cassidy Turley reported.

East Bay asking office rental rates were $2.34 per square foot on a monthly full-service basis overall in the quarter—virtually flat compared to the same period in 2013 but representing a gradual increase of 13 percent over the past two years, according to Cassidy Turley.

Ott said a number of firms are already located at Alameda Point, leasing a total of 1.8 million square feet. Alameda Point Partners’ project would attract even more new businesses and spur expansion while providing amenities that draw in both residents and out-of-towners alike, she said.

“It’s good to know things are moving,” said Dennis Freeman, assistant to the executive director at the Oakland-based East Bay Economic Development Alliance. “It’s a start of a new era for the area that will really blossom.”

Photo courtesy of City of Alameda