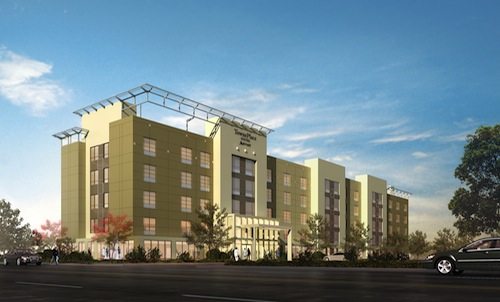 The long-time South Bay developer and general contractor and its partners are expected to invest approximately $55 million in the two ventures including equity and debt: $20 million in Santa Clara and $35 million in Palo Alto.

Both sites involve tight, infill locations where the builder has had to demolish previous uses to make way for new development.

The 1.2-acre Santa Clara location, which Swenson acquired in 2009, is at U.S. 101 and Bowers Avenue, across the street from the office redevelopment site recently acquired by The Irvine Co. from Equity Office Partners. Irvine intends to start speculative development on the first, 470,000-square-foot phase of the more than two million square-foot, mixed-use project in the second quarter of next year.

The new hotel at 2875 Lakeside Drive also will be roughly a mile from the completed San Francisco 49ers stadium.

The four-acre Palo Alto site, which includes 26 town homes being built by a different developer, is the locale of the former Palo Alto Bowl, which Swenson acquired in late 2007. The address is 4301-4329 El Camino Real.

After relatively difficult years in 2008 and 2009, the extended-stay segment is showing strong revenue growth in the Santa Clara-Santa Cruz metropolitan area, according to a trend report on the market prepared by Smith Travel Research at The Registry’s request. The region has added only 167 new extended stay rooms since at least 2006, putting the total at 4,201 rooms.

That compares with extended-stay hotel occupancy rates nationally in the 70 percent range, and lower but still respectable annual revenue increases in the 7.5 percent to 12 percent range in the last 30 or so months.

The five-story Santa Clara hotel has structured parking, the lobby and amenities on its first floor with the four floors above consisting entirely of suites, said Aaron Barger, the Barry Swenson Builder development project manager for both sites. The four-story Palo Alto hotel includes a library, business services and a pool.

Construction in Santa Clara is imminent and should be complete by December 2013. The Palo Alto development should be done by mid-2014 with a projected start date later this year.

Construction financing for both hotels is largely in place, said William J. Hamrick, president of TMH Hotels Inc., a Wichita, Kansas, -based hotel operating and investment company that has partnered with Barry Swenson Builder for more than a decade specializing in the extended-stay hotel niche.

“We believe there is plenty of demand in the market area right now, so it’s just going to get stronger” as the stadium and new offices are developed, Hamrick said.

“We are very particular about our locations. I’ve been doing this for 30 years. I’ve built 15 or 16 hotels, and I’ve looked at 200 I didn’t do. I think these two locations are exceptional,” Hamrick said.

Sites are selected overwhelmingly based on their proximity to corporate demand from business travelers who might stay at the hotel for a number of weeks in succession, leaving on weekends to return home, he said. Family reunions, weddings, visiting relatives and the like fill in Friday and Saturday nights. The hotels have a dining area and serve continental breakfast but do not have a full-service restaurant.

San Jose-based Bridge Bank is providing construction financing for the Santa Clara hotel, said Ralph Barnett, who runs the real estate lending division for Bridge. The bank is primarily a businesses lender that does some estate financing, often for owner-users of a property, he said. About 30 percent of its loans are real estate related.

Bridge has done some hotel lending in the last several years—but only refinancing of existing properties and acquisition financing, he said. Construction lending introduces another level of risk. To his knowledge, this is one of the first new hotel projects in the South Bay in the last several years. “The hotel business has done well in Silicon Valley for the last 12 months to 18 months,” Barnett said.

Aside from risks associated with financing a single-purpose property and a start-up business, the bank was wary of too many new hotel rooms coming online as the market recovers more, he said. But the location of the Santa Clara property near many companies “that have a lot of visitors” persuaded the bank that it would be a “destination” hotel rather than an “overflow” hotel.

“We looked at the companies that are located in the area, and some of the information we have seen shows that the average person traveling for those companies is staying longer, and they are looking for more than a bed and a nightstand,” he said. “They want a place where you can put food in the fridge and maybe even cook something.”

Both the 49ers stadium and Irvine office developments were finalized after his bank agreed to finance the Santa Clara hotel construction, making that demand icing on the cake, he said.