As one of the largest technology hubs in the world with a current multitenant data center inventory of 6 million square feet, Northern California is seeing an endless demand for more data centers to power tech growth. But with land prices rising steadily, especially in the Bay Area, the costs of building new complexes are becoming more prohibitive.

[contextly_sidebar id=”oZApjo44RfnYktbi9TSmoXDdY0c038rn”]And for some wholesalers, Silicon Valley in particular, has become a more constrictive marketplace based not only on land acquisition but also construction and operating costs, said Jeff West, director of data center research at commercial real estate firm Cushman & Wakefield in Portland. “Even though land in Silicon Valley is not cost friendly, in addition to no tax incentives and other negatives, there will always be a demand,” he said, adding that a major plus in Silicon Valley is its power company, Silicon Valley Power, which has lower rates than elsewhere in the Bay Area.

Horowitz said that two buildings totaling almost 400,000 square feet are also planned for a site adjacent to the SV1 and SV5 properties. Equinix, which has 100 data centers on five continents, specializes in retail colocation, meaning that many companies put their infrastructure in its facilities and often connect directly to one another for faster, secure business transactions, which it calls “interconnection.” In Silicon Valley, the firm’s seven buildings with 448,500 square feet of colocation space interconnects with 520 companies and connects with 140 network service providers.

“The close proximity is important for tethering our facilities together to provide latency to customers and interconnection,” Horowitz said, adding that the majority of the firm’s development pipeline worldwide is allocated to current campus expansions to meet demands of existing customers.

“We are well positioned to benefit from data consumption growth driven by the proliferation of mobile applications and content, the continued adoption of cloud services and emerging growth from the ‘Internet of Things,'” he said. “Specifically in Silicon Valley, we have recently opened a new phase of our SV5 facility and with our recently acquired land, we have plenty of runway for further growth in the [metropolitan area].”

And in June, CoreSite Realty Corp., a data center solutions provider, announced the development of SV7 on its Santa Clara campus. The 230,000-square-foot expansion to its existing 370,000 square feet has 36,000 square feet pre-leased and is currently in preconstruction. CoreSite said it expects to substantially complete phase one of the building in the second quarter of 2016.

Additionally, Vantage Data Centers in Santa Clara recently announced that a major, unnamed Silicon Valley software provider will set up a multimegawatt data center in Vantage’s facilities. The firm also finalized a deal earlier this year with Symantec Corp. that will deploy a hybrid multimegawatt mixed-use data center with Vantage.

Also Colovore, another Santa Clara colocation solutions provider, in March said that San Francisco-based colocation services provider Digital Realty Trust has made a strategic investment with the company, which is expanding its build-out of its nine-megawatt capacity at 1101 Space Park Drive.

For some firms concerned about Bay Area land costs for data center construction, a new option has recently emerged: floating data centers. San Ramon-based Nautilus Data Technologies is in the process of constructing its first data center on a converted 250-foot ocean-going barge at Mare Island in Vallejo. According to CEO and co-founder Arnold Magcale, the project is scheduled for completion during the fourth quarter this year.

Magcale said that Nautilus’ patented cooling technology is five times more efficient than conventional land-based data centers and is up to 70 percent cheaper to build. It also reduces annual energy costs by 35 percent, he said. According to the firm’s Web site, waterborne data centers can be configured and operated with up to 800 server racks and can be deployed in less than six months anywhere in the world. 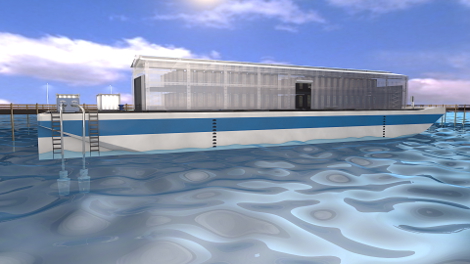