Nearly half the millennials “likely” to leave.

Confidence in the economy of the Bay Area has plunged, according to the annual Bay Area Council Poll of voters in the nine-county area.

But in the Bay Area, they’re fairly typical, struggling with the three top issues: costs of living, housing, and infernal traffic. And they’re getting “dour” about the economy and antsy about bailing out.

Even though the Bay Area economy has been booming for years, the people are seeing a chilling reality. Looking back, only 31% said the economy was doing “somewhat” or “much better” than six months ago, down from 53% in 2014: 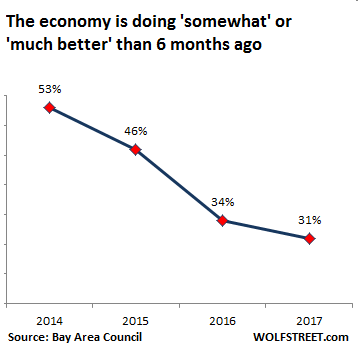 Their perspective on the near future looks, as the report put it, “similarly dour”: 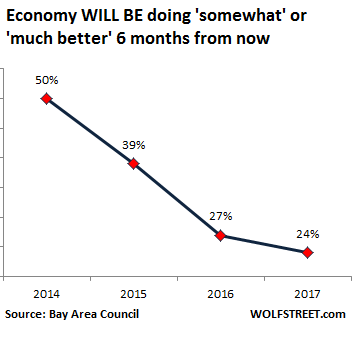 Where is the optimism of the youth? Millennials – more on them in a moment – were even less confident in the local economy than older generations.

And more of these folks are seeing some dark clouds:

Concern about a future economic downturn also intensified this year, with 45% of voters saying that the Bay Area will experience a significant slowdown sometime in the next three years. That’s up 8 percentage points from 37% last year.

In more granular detail: 15% expect that “significant economic downturn” within the next year; another 30% expect it within 2-3 years. In total, 45% see that threat on a three-year horizon: 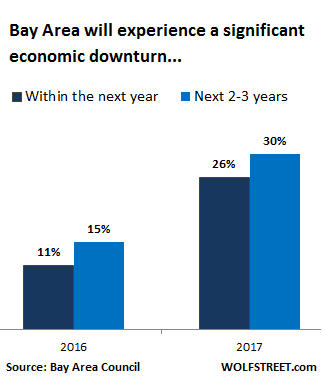 The report hammers home the point:

Weakening confidence in the region’s economy is consistent with softening attitudes about the overall direction of the Bay Area. The poll found a significant drop since 2014 in the number of people who think the Bay Area is headed in the right direction. In 2014, that number was 57%, compared to 42% today.

And the percentage of those thinking that “things in the Bay Area” are going “pretty seriously off on the wrong track” rose sharply over the past four years: 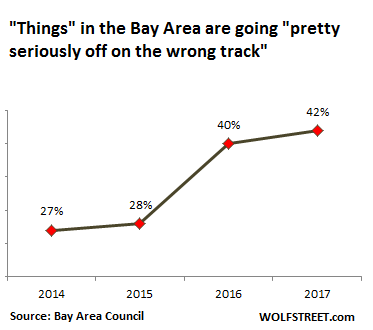 How could things go so wrong, despite all the money running amok? The three biggest culprits are cost of living, housing (which is part of cost of living), and traffic – which surged into third place, from an also-ran four years ago. In short, the costs of living and traffic are insane.

“We are playing a risky game with the Bay Area’s golden goose,” said Jim Wunderman, President and CEO of the Bay Area Council. “There’s an unquestionable link between our housing, traffic, and cost of living issues and plummeting confidence in our economy. We’re making it harder and harder for the next generation of leaders and workers to live here, and it will have serious consequences.”

The poll found that 76% of the voters consider the Bay Area’s housing problems a threat to the local economy. And who is bearing the brunt of it?

Millennials and those who have lived the fewest years in the Bay Area appear to be feeling the pinch the hardest. The Bay Area Council Poll found 33% of millennials ranked cost of living as the region’s top problem, and 65% listed it in the top three.

By comparison, of those over 65, only 16% considered the cost of living the top problem in the region, and 44% ranked it among the top three problems.

So what’s next? The inevitable…

According to the poll, 40% of the respondents say they “strongly agree” or “agree” that they’re “likely to move out of the Bay Area in the next few years.” Up from an already high 34% last year.

40% is a stunning number. This place would be empty. It would, of course, never happen. But if just 10% leave, it would still be a huge number. It would bring a catastrophic crash of the local economy, housing, and everything else. How likely is that?

The number of people speaking with conviction is smaller, but soaring: the respondents who said they “strongly agree” that they’d like to leave – those are the folks who’re seriously contemplating a move – jumped from 13% last year to 19% now!

Among millennials, who have a particularly hard time with the costs of living, 46% said they’re likely to leave. Nearly half!

The urge to bail out rises with the percent of their incomes that people spend on housing. Percent who say they’re “likely” to leave over the next few years:

And logically, it affects those at less elevated pay scales the most: 46% of households making less than $75,000 per year say they’re likely to leave.

The Bay Area is boom-and-bust by nature. The booms last longer than a prudent person can even imagine, and money sloshes through the streets knee-deep, and the costs of living soar. Even the higher local pay scales don’t keep up with housing costs. Then something changes.

It gets too expensive. Businesses are running into trouble or are transferring employees to cheaper areas – already happening, including at Charles Schwab in San Francisco. Eventually, the startup boom falters. Layoffs percolate through the local economy. Some of the people without jobs go back where they came from because it’s too expensive to hunker down. The money sloshing through the street dries up….

The local economy is not at this point, but early warning signs are cropping up that not all is well in this boom, and that this cycle too will end, like the others before it that turned into busts. And people are beginning to see those signs.

And those who lost out on the Fed’s “wealth effect?” Read… This Economy is Ruined for Many Americans