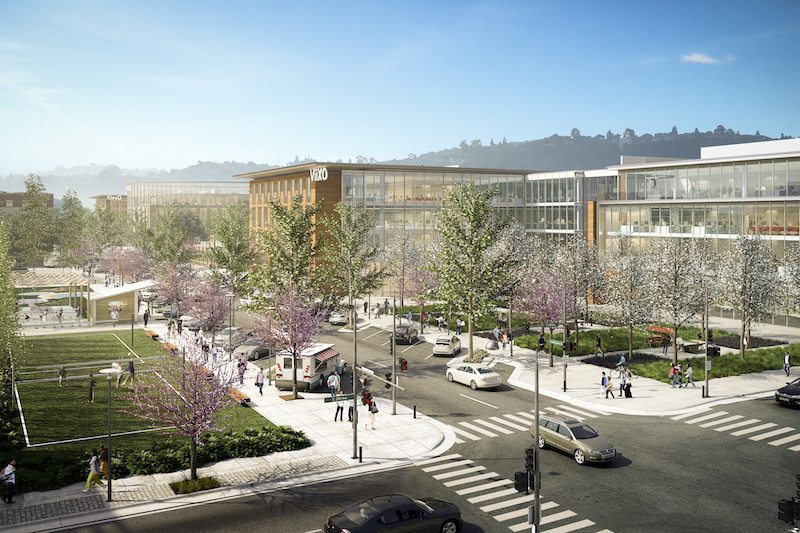 The developer of the massive master-planned Bay Meadows project in San Mateo has unveiled the design for a community commons it is calling a “social street,” that it expects will become a regional hot spot of action-filled spaces ranging from a beer garden and bocce ball court to a bandshell for events and entertainment.

[contextly_sidebar id=”7d940ba516d9be3c8c3750ea249436be”]Just like shoppers who may window-shop at different retail stores in a mall, those living, working and visiting the San Mateo development will be able to walk Delaware Street and check out the diversity of “park rooms,” said Kevin Conger, principal at San Francisco-based CMG Landscape Architecture, which is creating a comprehensive network of streetscapes at Bay Meadows that connect nearby public transit, homes and other mixed uses to sustainably designed open spaces.

Bay Meadows unveiled Delaware’s “social street” concept and renderings, which were not previously detailed in the burgeoning community’s plan, late last week. This street, with its traditional town square, will be a pedestrian-focused social hub of the likes of San Francisco’s chic Hayes Valley neighborhood or San Jose’s upscale Santana Row.

“It’s a street as a destination,” said Conger, who hopes Delaware can become a draw to those in the South Bay as Santana Row is for those on the Peninsula. “I hope it will become a regional destination.”

The street is “programmed with a lot of outdoor uses that people working and living in the community can enjoy and come together,” said Janice Thacher, partner with Wilson Meany, the San Francisco-based developer of Bay Meadows. “The street will be active and lively. We think it’s an exciting concept that will add a lot to the community.”

As envisioned, Delaware will also augment the future retail environment at Bay Meadows. “If we can invite enough people [to Delaware] … I think the retail will come,” Conger said.

Along one side of this street, five office buildings will add to the area’s vibrancy. For instance, the buildings will feature a long street frontage that can host retail uses, said Paul Woolford, director of design at HOK, a global architecture, engineering and planning firm that is part of the Bay Meadows project team. A large courtyard park will also house retail, he said.

“Some buildings will have arcades so people can walk through them,” Woolford added. Moreover, building lobbies will feature large pivoting glass doors that when open “can erase the boundaries” between outdoor and indoor spaces. So a party or presentation happening outside can spill into the lobby or vice versa.

No timeframe was given as to when construction of the social street would begin and finish, but development of Bay Meadows is expected to last the next three to four years.

Bay Meadows, once the site of an airfield and later a horse-racing track, is now being developed as a thriving, downtown-style urban village to include more than 1,100 units of housing, 1.5 million square feet of office space, 15 acres of parks, bicycle paths and hiking trails. The Nueva School, a nationally recognized independent institution serving gifted students, will also open its campus in Bay Meadows this fall.

Bay Meadows has eight planned residential neighborhoods, and the first ones that have gone on sale are communities by TRI Pointe Homes and Shea Homes. So far, more than 100 of the 156 already constructed homes have been sold with families moving in. More than 100 apartment units are also under way.

Woolford described Bay Meadows as taking transit-oriented development to the next level. “Bay Meadows is the very best example of a new type of work environment where it’s not just office buildings in a parking lot,” he said. “It’s a workplace, live and stay environment where people can work, shop, exercise and get on a train to go anywhere in the Bay Area.”