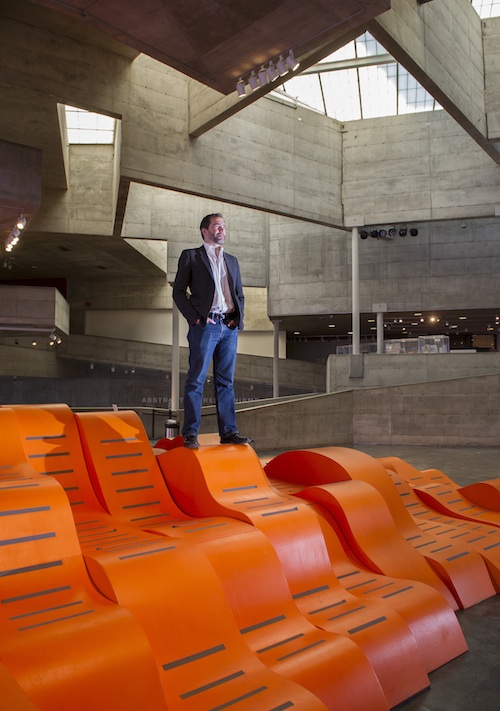 [dropcap]A[/dropcap]bout two years ago director Lawrence “Larry” Rinder and the board of trustees for the Berkeley Art Museum and Pacific Film Archive conceded fiscal reality and changed course in the quest for their institution’s new home.

One might say they opted for an old route to a modern facility—old as in the re-use of a 1939 art deco-style printing plant, situated where downtown Berkeley’s primary commercial and cultural corridor abuts the University of California campus.

Rinder and the museum’s design consultants say that converting and expanding the printing plant will ultimately create a facility that is just as functional as a previous, more costly plan to raze the structure and build anew. They likewise make the case that a repurposed printing plant is a more culturally significant option. What they don’t have to assert—because it is a given—is that renovating the printing plant and integrating new facilities is a greater challenge for architects and engineers than building new. 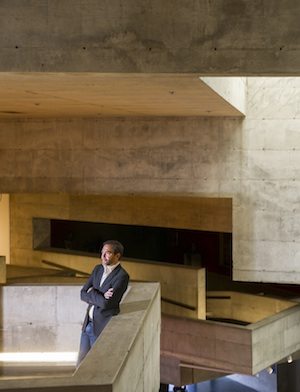 Accommodating the needs of this dual-purpose “special institution” constitutes a tricky design proposition, said Duncan Ballash, president of San Francisco’s EHDD|Architecture, the architect-of-record. The essential task, as he sees it, is to “leverage” the unique collections and programs of the museum and archives into a facility that echoes the distinct and equally important assets. The team also needs to look beyond the requirement of architecture suitable to display art to consider downtown Berkeley.

Back when the economy was humming in the mid-2000s, the board and EHDD engaged Japan’s famed Toyo Ito & Associates to help design a costly new home. When it became clear in 2009 that fundraising would fall short, the board opted to repurpose and expand the single-story, skylighted printing plant, dropping the overall project budget from nearly $150 million to less than $100 million. The new location’s floor space is roughly equivalent to the museum and film archives’ existing location several blocks away.

Big Apple-based architectural studio Diller Scofidio + Renfro completed the design, which includes the excavation of a lower level to add 12,500 square feet of gallery space and a second-floor café that cantilevers over the main entrance. The new main entry will be along busier Center Street. The institutions’ administrations will share the plant’s existing three-story office wing.

“The printing-shop portion already has a wonderful volume to it, with the north-facing clerestory windows creating natural light that will work great for galleries,” Ballash said. The result amounts to a new cultural anchor helping to revitalize the downtown district.

What was your first impression of how the existing structure could be adapted to accommodate the art museum and archive?

Larry Rinder: After touring the printing plant and conducting some preliminary space studies, we could see that we would be able to use the existing spaces for the gallery program, and that the [Pacific Film Archive] Theater and archives as well as back-of-house spaces [loading dock, storage, matting and framing] could be accommodated on the adjacent site to the north. However it was also clear that we would somehow need to add a significant amount of gallery area to approximate the area we currently have.

Can you identify the most daunting design and engineering challenges?

The excavation is complex, but no more difficult than other recent excavation challenges on campus, most notably the Hearst Mining Building. The Printing Plant as it is now is fairly good seismically. I think the biggest engineering challenge we have faced thus far is achieving the designers’ aim of creating the impression of a floating theater and galleries. We’re still working out the kinks on that one.

Can you identify some exterior articulations you feel are particularly noteworthy?

One of the most striking exterior features is the cantilevered café, which will mark the entrance on Center Street while also recalling an old-style movie theater marquee. From inside, patrons will have dramatic views to downtown Berkeley and the campus. Also the media screen on the north side of the theater will provide a wonderful public opportunity for film, video and other media screenings.

Describe the integration of the existing structure, which will house the museum, and the new construction for the film archive.

The relationship between the new and old sections is a subtle balance. There are ways in which the two sections integrate and harmonize and other ways in which they suggest a rupture or surprise adjacency. In poetic terms, one could say the new form hugs the old, throwing an arm around its back and waving to people walking by on the Center Street side.

How different are the primary museum exhibit and gallery space from your current location?

The galleries will no longer need to be experienced in a linear progression. There will be multiple and variable points of entry. The new galleries on the lower level will have much greater capacity for light and sound control.

Are there design characteristics that are customized to the art museum’s unique collection?

Our collections and programs are very diverse, encompassing historical and contemporary art in all media from global cultures. So, the priority for the galleries was to create flexible and diverse spaces. While we welcome the plentiful natural light, we also wanted a significant amount of highly lit and sound-controlled space, which was achieved on the lower level. The only unique spaces are the MATRIX Gallery, a small gallery just off the main entrance, which will be dedicated to our signature program of small-scale exhibitions of contemporary art, and a gallery on the lower level that will feature a collection of sculptures and paintings from the Himalayas. The Himalayan Gallery will have a wonderful garden.

Compare the new film archive space to what you have.

Because of the seismic issues in our current building, we have been using a temporary film theater for several years. The new large, 230-seat theater will be designed for optimal sound, sight and seating. There will be an adjacent area that can be used for informal gatherings. A significant improvement will be the creation of a large and visible Library and Film Study Center, in which we will make available a large portion of our 300,000-plus-item collection of books, periodicals, photographs and clippings. There will be two booths for private screenings of films and digitized films will also be available for viewing. In the new building we will have a 35-seat theater for public film programs as well as for other education events, such as readings and lectures. We also anticipate a major new film component in the form of a large outdoor LED and film screen, facing Addison Street.

What does the new construction’s metal skin convey?

We are still finalizing the precise cladding material. However, we know it will be a grayish metal. We are looking for beautiful, sensual and long-lasting material. The new structure will echo some of the elements of the printing plant’s design, such as curvilinear forms. However, it will also provide a contrast to the older building, announcing the forward-looking perspective of the museum and university.

How do the renovation and architecture reinforce the intersection of downtown and the campus?

The site is an ideal hinge between campus and community. We have already begun discussing how we can use our facility and program to help make the rich intellectual and creative resources of the university more accessible. Beyond the site itself, the new building design underscores this desire for accessibility by making the Center Street façade almost completely transparent. [We also] create visual access around the Oxford Street façade, in particular by allowing views from the sidewalk to the lower-level collection storage and film library areas.

Improving access was another stated goal. How have you done?

Our current building is too far from BART for most people to want to walk. The new building will be one block from the BART station. As far as program areas are concerned, the aspects of our museum that will see much better visibility and accessibility are primarily the film library and the art collection. Each of these areas will be visible to the public and will accommodate drop-in visits to the library and by-appointment visits to storage [facilities].

The project has not gone out for bids, so no cost per square foot has been established and no subcontractors selected.