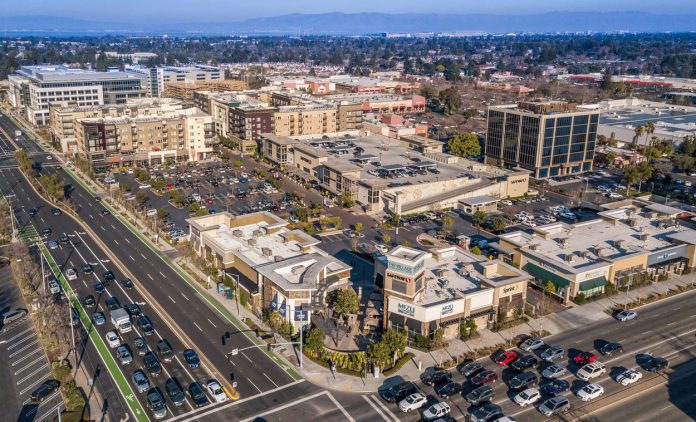 Offices, retail and a movie complex within Mountain View’s The Village at San Antonio Center have been purchased in one of the biggest transactions to close in the Bay Area this year to-date. In a deal that was finalized on March 30, Brookfield Properties paid $630 million for two parcels part of the mixed-use development. The seller was an entity associated with San Francisco-based Merlone Geier.

Goldman Sachs, Société Générale and Credit Suisse originated $505.6 million in debt to finance the deal, according to the Commercial Observer, who was the first to report on the transaction. The commercial mortgage-backed securities (CMBS) loan was combined with $139.2 million in equity from Brookfield to close the deal. Brookfield also paid $8 million in closing costs, as well as $3.4 million in future landlord obligations and $1.4 million in gap rents.

Brookfield’s latest acquisitions within the 15.1-acre master planned community are not its first. In October 2019, Brookfield acquired The Village Residences, a 330-unit apartment complex at 545, 555 and 565 S. San Antonio Road for $292 million. Brookfield purchased the asset from Merlone Geier and Carmel Partners. The buildings also included 43,000 square feet of ground floor retail.

The transaction comes after an uncertain 2020 as major industry players continued to evaluate the future impact of COVID-19 on the economy and commercial real estate markets. At the end of the year, total available office availability in Silicon Valley increased by 41.25 percent year over year to 14.69 percent. Sublease availability increased to 3.4 percent by the end of the year. A recent report by Kidder Mathews also notes that gross absorption decreased from 9.2 million in 2019 to 4.5 million in 2020. However, Mountain View’s total vacancy rate was just at 4.29 percent at the end of the year, and it was only one of two markets to see positive net absorption.

As of this writing, Brookfield had not yet responded to The Registry’s request for comment.