The city of Burlingame is seeking developer interest in the remake of 20 city-owned parking lots as part of a larger mission to exploit the value of city assets and to engender greater prosperity in the town’s already prosperous central business district.

The city is seeking interest in new home construction or mixed-use projects that include housing and retail development.

The lots range from just more than 1.5 acres, or 76,024 square feet—the largest—to a fraction of an acre adjacent to the Burlingame train depot that serves the Caltrain commuter rail line. That site’s use is unclassified and now accommodates 19 surface parking spaces.

The largest site is occupied by a structured parking garage but is adjacent to a quarter-acre surface lot that is also up for grabs, according to city offering documents.

Precipitating the offer is the city’s adoption Oct. 4 of a new land plan for its well-regarded Burlingame Avenue shopping district and the parallel, but less robust Howard Avenue to its south. The two streets travel roughly east to west and connect El Camino Real and California Drive.

Burlingame Avenue is home to a generally thriving shopping district that includes an Apple store, a Starbucks, a Gymboree and a broad collection of other local and national restaurants and shops. Retail vacancy in the downtown area is 6 percent, according to Burlingame city officials.

The city is generally interested in housing, especially along Howard, but also would like to see mixed-use development that includes retail, said Bill Meeker, Burlingame community development director. “I have spoken to several developers already, and we will entertain housing and retail, but there is a strong desire on the part of the city to have housing on the Howard Avenue corridor. We feel the way to promote more retail development on Howard Avenue is to have more people living there.”

Burlingame has no redevelopment agency and is not offering financial incentives, he said. But the council is open to creative financing and other ideas, including long-term ground leases and outright sale.

“The trigger for putting the [request for qualifications] out now is the completion of the city’s downtown plan, which promotes better use of downtown property,” Meeker said. “The public parking lots are such dead areas between Howard and Burlingame avenues now. Obviously in this economic climate, any opportunity for the city to make better use of our assets is welcome, too.”

The deadline for submittals is Aug. 1.

Only one of the 20 lots, with nearly 17,000 square feet, actually fronts Burlingame Avenue.

Any parking lost must be replaced by the developer either on the same site or at another location.

New BevMo and Walgreens stores have opened and are operating on Burlingame Avenue, Meeker said. Safeway is working to complete a new 45,000 square-foot store in the immediate vicinity. That project includes another, nearly 17,000 square feet of shop space.

Burlingame has not quite 30,000 residents and 11,000 households. The town has the reputation along with neighboring Hillsborough of an affluent, upper-middle-class population. Downtown Burlingame is also Hillsborough’s de facto business district.

According to the most current data from the U.S. Census Bureau—which does not reflect an update that Meeker expects any day from 2010 Census findings—the city has 12,000 housing units, half of which are owner-occupied. More than 28 percent are more than 60 years old, and the overwhelming majority were built before 1989.

The average household income is just shy of $120,000, and more than 4,200 of the town’s 11,000 households earn in excess of $100,000 a year, the Census Bureau says. Forty-two percent of the households are married couples with families. All but a fraction of the residents have high school diplomas and more than half have at least a bachelor’s degree.

“In a more normal market—one with more readily available construction financing—I would think the city would get a big response,” said John Lukrich, a commercial real estate broker with Pacific Union Commercial. As it is, Burlingame is probably the best-positioned Peninsula city to be able to support new-home construction, he said.

Lukrich is a listing broker for two commercial properties on Burlingame Avenue that are being offered for sale at 5 percent capitalization rates, a value that he described as “aggressive.”

A third property occupied by an Apple store at 1301 Burlingame Ave. had been on the market as well up until about two weeks ago, he said. It was listed for sale at $12 million, had a 4.5 percent cap rate and produces not quite $45,000 in monthly rent. The lease expires Jan. 31, 2013, but there is a single, five-year option. The 4,500 square-foot property did not sell. 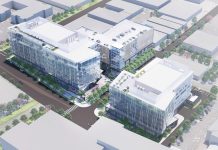 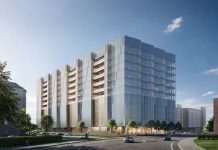