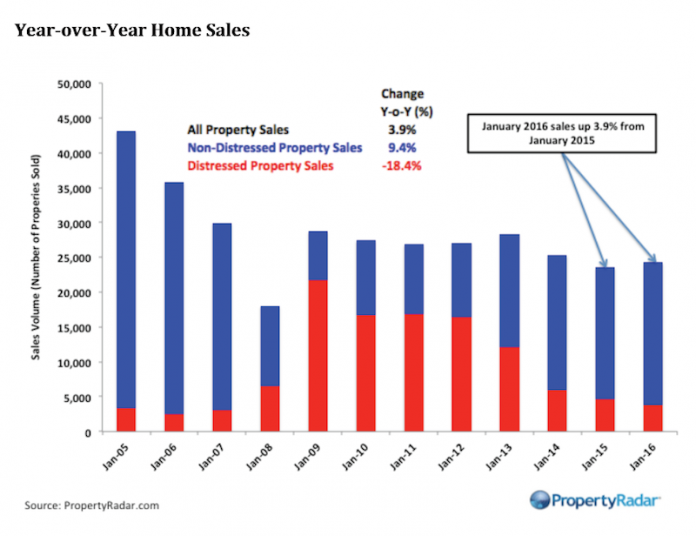 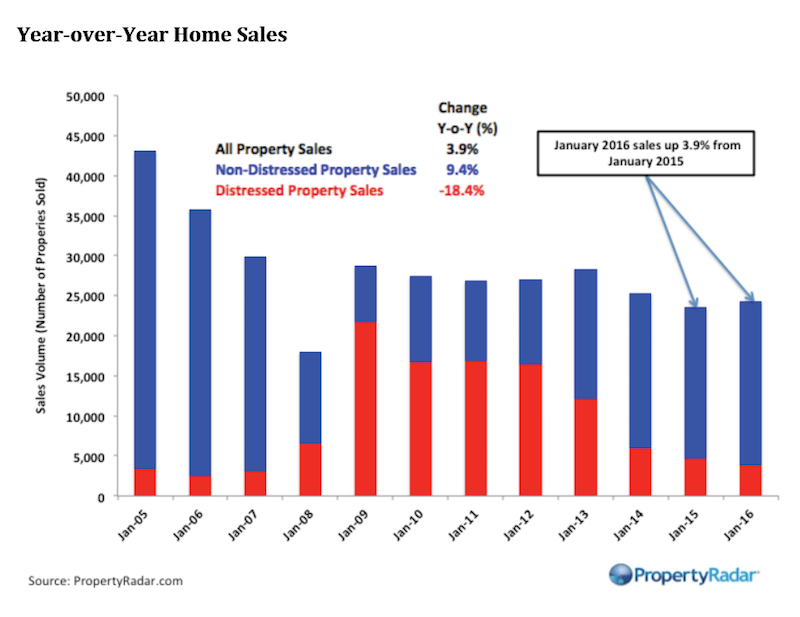 “Despite a slowdown in many national economic indicators, California single family home and condominium sales picked up in January 2016,” said Madeline Schnapp, Director of Economic Research for PropertyRadar. “California’s real estate market continues to be resilient. The extreme volatility in the equity markets has precipitated considerable outflows of cash, some of which may be finding its way into California real estate.”

The January 2016 median price of a California home was $400,000, down 2.4 percent from a revised December 2015 price of $410,000. The median price of a condominium was $385,000, down 3.8 percent for the month. On a year-ago basis, median home prices were up 8.1 percent, while condominium prices gained 6.6 percent. Most of the price increases for both single-family residences and condominiums happened during the first four months of 2015. Since April 2015, prices have been trending mostly sideways.

“Affordability has become a significant issue in many coastal counties throughout the state, particularly in the Bay Area,” said Schnapp. “Recent stock market volatility and growing fears about the national economy may send investors scampering to the perceived safety of real estate, putting additional upward pressure on prices.”

“Despite high prices, one in five real estate transactions are for cash,” said Schnapp. “In a zero interest rate environment, which may go negative in the near future, real estate investing remains an attractive alternative in an environment starved for yield.”

About PropertyRadar®
PropertyRadar provides software, data and analysis products for Real Estate professionals to find opportunities, lower risk and increase productivity. PropertyRadar has been serving its customers since 2007 (previous Brand name and older product known as ForeclosureRadar) and counts thousands of real estate investors, Realtors® and other real estate professionals among its subscribers. Bloomberg, 60 Minutes, Wall Street Journal, Los Angeles Times, San Francisco Chronicle, the Associated Press and many other leading media outlets have cited our data as the authoritative source for property-related reports, trends, graphs and insights. The company was launched in May 2007 by Sean O’Toole, who spent 15 years building software companies before entering the professional real estate market in 2002 where he successfully bought and sold more than 150 residential and commercial foreclosures.