The California State Teachers’ Retirement System is going long on the old.

The second-largest public employee retirement plan in the country expects to invest an additional $100 million in a partnership to buy senior housing, including Bay Area properties. The commitment augments an existing partnership first formed in 2006 into which CalSTRS has poured $325 million of equity, including the most recent $100 million.

The pension fund considers the real estate investment a value-add opportunity. CalSTRS listed total plan assets of $147.6 billion at the end of February.

Vintage Senior Living Co-Chief Executive Officer Eric Davidson said, “The company thinks that the demographics are good for senior housing in the San Francisco area. There is a strong population base of seniors over age 75 who have solid income levels and the housing market in Northern California is okay.”

The real estate manager has a regional office in San Ramon on Crow Canyon Place. The joint venture with CalSTRS is called VinCal.

Vintage spent $40 million last year to buy The Coventry, a 169-unit senior apartment complex in downtown San Francisco at 1550 Sutter. The deal included $28 million in assumed debt and $12 million in equity. The property was more than 90 percent occupied when the deal was completed.

The investment produced a 7 percent to 7.25 percent capitalization rate, a measure of yield. This return is based on the existing net operating income being produced by the complex.

Vintage has a fairly significant portfolio of senior housing properties in the San Francisco Bay Area. These include two in San Francisco, two in Berkeley and one each in Santa Rosa, Sonoma, Walnut Creek, San Ramon and San Jose.

Most of its properties are assisted-living centers and properties geared to patients suffering from Alzheimer’s disease. The company looks for properties mostly in Northern and Southern California and will pursue development alongside the purchase of existing centers.

CalSTRS owns 90 percent of the investment interests in the joint venture; Vintage owns 10 percent. Vintage has contributed $6 million in equity over the life of the relationship. The manager typically expects to leverage the venture’s equity with 65 percent debt.

CalSTRS also has placed $300 million with PanCal Opportunity LLC, a partnership that includes Sacramento-based Panattoni Development Co. Panattoni made a $33.3 million equity investment in the partnership and holds a 10 percent ownership stake in the venture. CalSTRS owns the other 90 percent.

The partnership will focus mainly on industrial properties, but CalSTRS is leaving some room to invest in office assets. The pension fund wants to target top major metropolitan areas nationwide, including New York, Los Angeles, Washington, D.C. and Chicago. The strategy is to create value through development, redevelopment, intensive management and leasing efforts.

Des Moines, Iowa-based Principal Real Estate Investors has an oversight role but no ownership in the partnership. 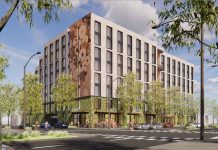