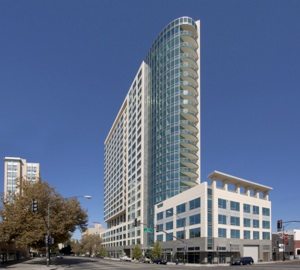 San Jose’s strong job growth, the quality of the asset and the attractiveness of neighboring amenities such as the California Theatre led Chicago-based Capri Capital Partners LLC to buy downtown San Jose’s 360 Residences, a new condominium complex converted to apartments in 2011.

The company paid $118 million and accepted an approximately 4.2 percent capitalization rate. The purchase price was a $1 million less than the original construction loan and far less than the reported $200 million price tag of the total development.

“We are extremely impressed with the strength of the San Jose market. We felt this was an extraordinary opportunity and a quality asset,” Ken Lombard, a Capri partner and the senior member of its investment team, told The Registry. Lombard works from the company’s Los Angeles office.

Capri is comfortable with the price, which translated to $554,000 a unit, and believes that greater returns lie ahead, he said. “We are long-term holders, and our intent is to continue to monitor the market and rents, and to continue to move this project forward.”

“We feel confident that there is upside,” he said, “and that we were able to capture an asset that is underpriced.”

There is no expectation that Capri would convert the property back to condos, he said, though he did not categorically rule out the possibility. He declined to identify Capri’s investment partner. A news release identified the entity only as “an institutional investor.”

Capri is an institutional real estate investment adviser that holds a variety of equity and debt instruments through separate accounts and commingled funds on behalf of its pension fund and other institutional clients. At the end of September, it managed $3.6 billion in assets valued at gross fair market.

The purchase price for the San Jose building represented a significant discount to replacement cost, which is in the neighborhood of $700,000 a unit, said Stan Jones, an executive vice president for investments with Institutional Property Advisors, a multifamily brokerage division of Marcus & Millichap Real Estate Investment Services. IPA represented the seller in the transaction, Beverly Hills-based Kennedy Wilson Inc.

He and the rest of the IPA team, including vice presidents Phil Saglimbeni and Sal Saglimbeni, closed just shy of $490 million in Northern California apartment sales in the first quarter and have another $100 million under contract including one Nevada complex, Jones said. That compares to about $800 million in total sales in all of last year. Given the current pace, he expects to sell more than $1 billion of apartment properties in 2012. “There are still plenty of buyers,” Jones said.

Jones estimated that IPA controls about 45 percent of the core Bay Area market share for apartment sales. “Lots of institutional capital and foreign buyers” considered 360 Residences, Jones said. “It was a rare opportunity.”

“San Jose is considered the No. 1 rated city for job growth and in the last couple of years, No. 1 in expected rent growth,” he said.

The 23-story luxury complex has 213 units and over 10,000 square feet of commercial and retail space, all of which remains vacant. The living units were 94 percent occupied and 97 percent leased at closing. The project reached those thresholds in a year. Rents exceed $3,000 a month on average, according to a Capri news release, which also touted residents’ access to the valley’s light-rail system and Caltrain, the regional commuter rail service that connects San Jose to job markets across Silicon Valley, the Peninsula and San Francisco.

The capitalization rate was “very low,” Jones said. “The yields have been stretched to a very thin point, but they are acceptable in light of other investment alternatives.” He does not expect them to go lower unless interest rates make an unexpected decline, he said, but, “anything can change it.”

Cap rates, a measure of yield, have fallen from about 6.5 percent in 2009 to where they stand today, he said.

The complex has seven unit types and 56 floor plans with square footages that vary from 704 square feet to 3,440 square feet. Common-area amenities include a heated swimming pool and spa, a furnished sun deck, a 24-hour fitness center, a community lounge with a kitchen and free Wi-Fi, a business center and executive conference room, a barbecue and cabanas for outdoor entertaining and concierge services.

Kennedy Wilson Senior Managing Director Kurt Zech told The Registry when the property went on the market early this year that renters’ median household incomes exceeded that of the San Jose metropolitan area by a significant margin, that they were highly technology focused and that they wanted an upscale living experience not available elsewhere in Silicon Valley.

“We think there is an extremely strong base of renters who are looking at this facility,” Lombard said.