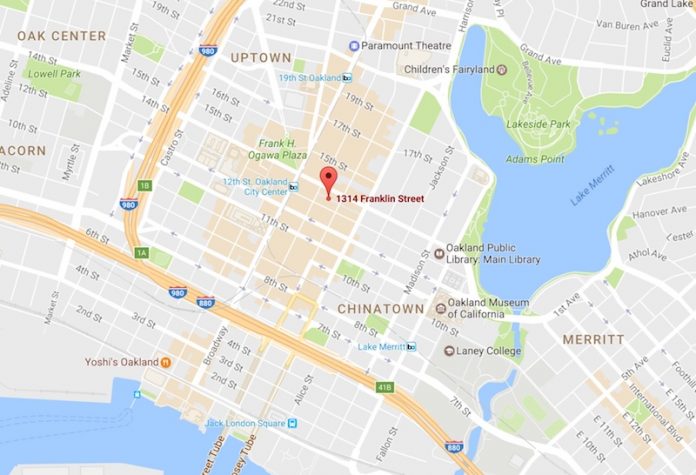 San Francisco-based Carmel Partners has made plans for the future to develop a 573-unit apartment project in Oakland called 1314 Franklin. The development of the apartments will not commence until the end of 2017, and it would likely take the company another two and half to three years to complete the project.

[contextly_sidebar id=”c5HDX667o0qJIqoyKUl9gScbgarur9hL”]“We think that the apartment market in Oakland is at an attractive spot for the development of new units. With mass transit available nearby, renters do have the capability to get to the major employment centers in either San Francisco or the East Bay. Our site in Oakland is a good example of this, as the renters will be a one block walk from a BART station,” says Rich Bennion, senior vice president of investor relations for Carmel Partners.

The site for 1314 Franklin is currently operated a as parking garage. “This will allow as to continue to earn some income from the property while we work our way through the pre-development process. One new amenity that we will be adding to the Oakland apartment market is our property will have the only doorman-operated apartment building in the city. This will give our property an additional feel of luxury to it,” said Bennion.

The development in Oakland will be placed into the Carmel Partners Investment Fund VI. The real estate fund manager just announced a final capital raise on the commingled fund of $1.025 billion. The project will be the first closed investment for the commingled fund.

The investor will be looking for both new development opportunities and the acquisition of existing assets. “We are currently favoring new developments deals over existing purchases. We think that we can develop new properties at a price similar to the cost to buy and renovate an existing asset, which is about 20 percent to 30 percent lower than what newly developed assets are selling for today,” said Bennion.

The company has several target markets that it wants to invest capital into going forward. These would be Northern California, Seattle, Southern California, Honolulu, Denver, New York City metro and Washington, D.C. Carmel Partners has a typical holding period on its assets that lasts for five to seven years.

Seattle is a market that the manager is watching closely. It’s aware of all of the units being added to the market in the downtown region. “Our focus for Seattle is more on the east side of Seattle in the market of Bellevue and Redmond. We think there are some strong opportunities in this region,” said Bennion. The company currently owns 618 units in Seattle that are in the process of being developed.