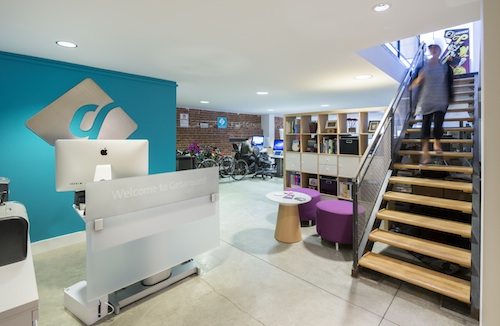 Technology companies are driving leasing, but expansion is often tempered

[dropcap]T[/dropcap]alk about climbing a wall of worry. In manufacturing, just-in-time production relies on skinny inventories to cut carrying costs and boost return on investment. While people aren’t cogs, and modern offices aren’t delivered overnight, cautious Bay Area companies are adopting just-in-time thinking about their workspace. San Francisco’s Riverbed Technology Inc. has signed two large 10-year leases in recent months. But with the dot-com bust in mind, it is watching its real estate consumption. “There are companies out there right now that are taking down gobs of real estate just so they will be in control of that. We don’t do that. We don’t want to be in the real estate business, and we forecast headcounts accurately,” said Steve Hirai, Riverbed’s senior director, corporate services.

“That is why we have cash in the bank and no debt.” Last year, Riverbed leased the top three floors at Menlo Equities’ 525 Almanor Ave. in Sunnyvale with 104,000 square feet. It is occupying in stages. Then in February it leased nearly 168,000 square feet at TMG Partners’ 680 Folsom St. in San Francisco, where its annual rent ranges from $8.4 million, or about $50 a foot a year, up to $9 million a year, starting in August 2014.

[pullquote_right] “We are getting away from the metrics of ‘What are you leasing?’ to ‘How many teams can use this space effectively and complete this many projects in this period of time.’” Doug Wittnebel, a Gensler principal and design director in its San Ramon office.[/pullquote_right]Even if quarters get tight, the company will maneuver to make it work. “We are a flexible organization. We can move people around, and we would rather be a little tight than have a whole bunch of space,” said Mike Guerchon, senior vice president for human resources.

Demand for just-in-time real estate has emerged strongly in the current stop-and-go recovery, an outgrowth of underlying anxiety about the durability of the technology boom. New companies like LiquidSpace have created a market to lease real estate by the hour, and for-profit incubators offer desks that can be rented by month. But the urge is not limited to startups and eager entrepreneurs. Many of his architectural firm’s clients want their offices delivered just in time, too, said Doug Wittnebel, a Gensler principal and design director in its San Ramon office. The 2008 financial crisis remains fresh in many minds, and economic signals are still too mixed for comfort in some circles.

“It’s the uncertainty,” Wittnebel said. “They don’t want to commit to too much space. The Bay Area has been on fire for the last year and a half, but it’s common for companies to get shorter-term leases and to demand faster delivery times on the construction, design and lease sides.” Even Gensler itself is cautious about hiring. Like many companies, Riverbed has pushed its ratio of square footage to employee far below the traditional 250 square feet to one. Today, its offices measure closer to 130 feet per employee, Hirai said.

Yet, even the square-foot-to-worker ratio may be losing its relevance. Some clients—mostly technology companies—and Gensler internally have begun to deconstruct the gauge and are moving productivity and outcomes to center stage. “We are getting away from the metrics of ‘What are you leasing?’ to ‘How many teams can use this space effectively and complete this many projects in this period of time,’” Wittnebel said.

He does not see business demand for employee workspace ever going to zero, but estimating a lower limit is another matter. Real estate continues as an important place where collaboration and sharing take place, but how it is measured going forward may look little like the past, he said.

Everyone is happy for tech’s strength but is looking for a more broad-based recovery. In past upswings, small and large tenants prospered in unison, said Gregg Nelson, a principal at Danville-based Trumark Commercial, which builds, leases and sells buildings. Big companies like Intel Corp. and Cisco spawned nearby companies, “and those companies together absorbed more space than the mother-ship,” he said.

This time, large technology companies have led the recovery but aren’t spinning off new local enterprises. Tech’s ascendance has produced “exaggerated” demand for space in Silicon Valley’s traditional core markets, Palo Alto, Mountain View and Sunnyvale, driving their rents ever higher, even as properties in less attractive locales languish. Santa Clara and North San Jose are coming around, but “[tech companies] have strong feelings about where they want to be and the image they want. It is a different culture than it was 30 years ago,” Nelson said.

Technology-related demand now accounts for 78 percent of his work, compared to 52 percent in 2009, and margins are shrinking, said David Hayes, chief executive and president of Skyline Construction, which has offices in San Francisco and Silicon Valley. With a focus on tenant-improvement work and critical infrastructure like data centers, Skyline has done work for Airbnb Inc., Dropbox, Justin.tv Inc,, RocketSpace, StubhHub Inc., Sega of America Inc. and Yammer in recent years. Annual revenue has risen from $45 million in 2009 to $136 million in completed or contracted work so far in 2012. “As for any business leader, it is worrisome whenever you get overweight in one business sector,” Hayes said.

Jon Haveman, chief economist for the Bay Area Council Economic Institute, said financial and legal services—both whacked in the recession—would expand again, though it won’t be for several years. The two traditionally dominant industries in the San Francisco leasing market have been eclipsed by tech, making the city’s strong leasing since mid-2010 and Silicon Valley’s a sort-of one-hit wonder. But when recovery finally does take hold, the legal profession will be much changed.

“The new business model will not be as profitable as it was before 2008, and the economics of the profession and people’s expectations of their retirements will change,” said Kurt Kicklighter, executive partner in California for McKenna Long & Aldridge LLP. Kicklighter is the former managing partner for Luce Forward, Hamilton & Scripps LLP, a California firm that merged in March with McKenna Long, which has 10 offices nationally and one in Europe.

Despite the overreliance on tech, tenant demand for space seems to remain solid in San Francisco, on the Peninsula and in Silicon Valley. The East Bay continues to struggle, but brokers there say rising rents in San Francisco are pushing tenants across the Bay Bridge. The press has documented ad nauseam Facebook Inc.’s botched initial public offering. But IPOs are not as important as they were during the dot-com boom, Haveman said. In 1999 there were 308 IPOs by technology companies. Last year there were 44, according to research from Jones Lang LaSalle. Today, IPOs create wealth, not economic momentum, Haveman said.

At the end of last year across the Bay Area, job counts remained 8 percent below the 2.7 million in 1999. High-tech manufacturing jobs continue to evaporate, falling to 134,300 at the end of 2011 from more than 202,000 in 1999. With the exception of 2 percent growth in San Francisco County to $71,000, inflation-adjusted median incomes have fallen across the Bay Area in the last 12 years, most of all in Silicon Valley where they are down 7.7 percent.

As unyoked as the Bay Area may sometimes seem from the U.S. economy, it is not, said Haveman. Longer term he is very optimistic about the region’s prospects, and shorter term predicts the economy will continue to grow faster than the nation’s. But, the immediate prospects for the U.S. economy are murky. “Europe is a huge worry,” he said, “and how badly it spirals out of control.” The U.S. economy could be pushed back into recession, with the East Coast taking the brunt. “The West Coast will be more collateral damage,” he said. Ken Rosen, chairman of the Fisher Center for Real Estate & Urban Economics, also warned in late April that “Europe could cause a double-dip recession.” While 2012 will be a good year, he said, “in 2013, there are a number of uncertainties. It is much more problematic.”

Harvest Properties paid $30 million for 731 Market St. in San Francisco this spring after buying the 34,000 square-foot Pioneer Trunk Building in the Mission District earlier. Joss Hanna, a Harvest partner, said the Pioneer building “is on the edge of traditional office demand.”

Despite economic uncertainty and the tech-silo recovery, he is optimistic. “We track job growth very closely because that drives demand. No one is satisfied with the pace of job creation, but if you look at the overall trends from 2010 to today, it has been very positive,” he said, and progress has come despite setbacks like the Japanese tsunami and political upheaval in the Middle East.

He also gains confidence from the emerging recovery in other cities such as Seattle and Denver and the nascent demand for his properties from tenants in the marketing, public relations and insurance businesses. “It gives me confidence that the next 18 months will be as good,” he said.

Low vacancy and soaring tenant demand to be in San Francisco’s hip South of Market district is pushing companies and landlords to nearby neighborhoods. TMG Partners said in early May that it was buying The Hamm’s Building with 183,000 square feet at 1550 Bryant St. in San Francisco, jumping the Central Freeway and U.S. 80. It plans $15 million in upgrades. Days after the closing, Adam Chall, the TMG partner who spearheaded the acquisition, said he had letters of intent from six companies looking for leasing opportunity.

In April, peer-to-peer car-sharing company Getaround opened its new 3,500 square-foot office at 8th and Howard streets in the city, not too far away. The company very deliberately chose SoMa for its new digs because the neighborhood mirrored its culture.

“San Francisco is becoming the center of the collaborative consumption industry,” building on its reputation for embracing change and experimentation, said John Atcheson, a Getaround vice president. Peer-to-peer car sharing—in which a car owner rents his car to another person by the hour or longer—requires a high degree of trust to function, which makes social networks and their immediate feedback loops a necessary precursor for keeping car lessor and lessee honest and weeding out the losers. 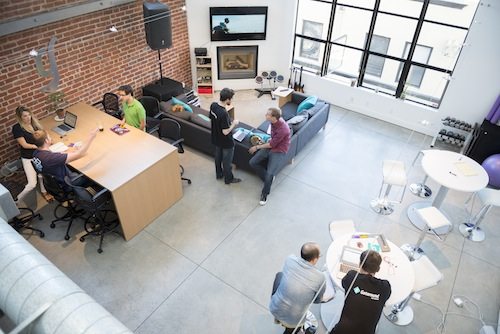