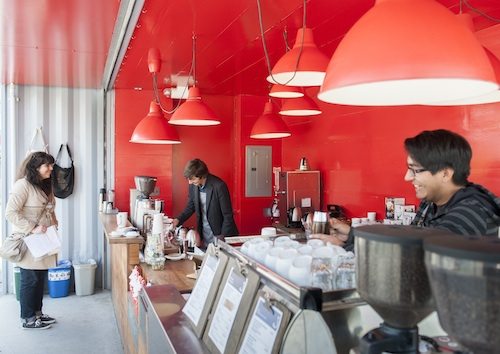 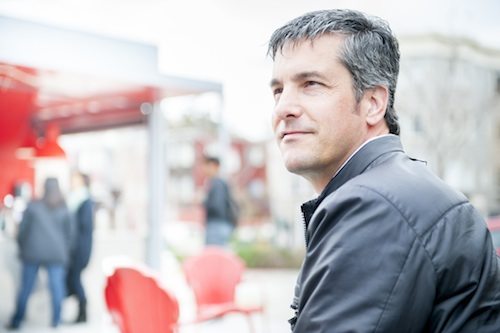 Reconceiving architecture and the urban environment as inherently impermanent

[dropcap]E[/dropcap]nvelope Architecture + Design is turning a basic principle of development on its head on a two-block stretch of Octavia Boulevard in San Francisco’s Hayes Valley neighborhood. Rather than building for the ages, the firm has created a project designed to go away in only four years. It is called Proxy, alluding to its role as a placeholder until the economy justifies more permanent development.

Using shipping containers as basic building blocks, Proxy offers a mix of food, art and retail venues. Eventually it is to include a covered event space. The containers measure 8 feet by 20 feet, and stand 9.5 feet tall. 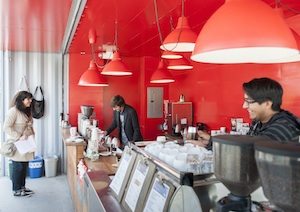 The project’s genesis came in 2005, when Envelope won a competition to design multifamily housing farther down Octavia. When the soft economy put that project on hold, the city came back with an offer to allow the firm to try a four-year lease on the Proxy land—two adjacent lots between Hayes and Fell streets that once held up a stretch of the Central Freeway. The land totals slightly more than 17,000 square feet, or less than a half acre. It is leased for the same price as its former use as a parking lot.

By using the containers, at least parts of Proxy can live on after the project is gone. “We have designed these spaces such that when the leases are up, they can essentially be put on a truck and taken to another location,” said project architect Lizzie Wallack. The firm did pour concrete slabs and arranged for utilities. “In that sense it’s fairly plug-and-play.” The next property owner will likely demolish the slabs to make way for a mixed-use housing project.

But the shipping containers aren’t really the main point, said Douglas Burnham, founder and principal of the Oakland firm. “There have been many shipping-container projects in recent years. They just happened to be useful for this project,” he said. “The bigger idea of the project is that it is a kind of framework for content to be brought to this site.”

Accenting the temporary nature of the entire endeavor, its tenants are expected to be coming and going all of the time. “We are looking to do a whole series of curated pop-up [stores] that would focus on young designers of local companies that have great products but don’t have much visibility,” he said.

While it’s intended to go away in 2016, Proxy didn’t fit the official city definition of “temporary,” which is 90 days or less. That means it has to meet California energy standards and comply with the Americans with Disabilities Act.

To date, the firm has invested $230,000 to finance infrastructure improvements, common-space upgrades and permit costs. That does not count donated architectural services or the vendors’ costs. If all of the project components were constructed, the site would need an additional $600,000 in improvements and approvals, not including vendor contributions.

A graduate of Cornell University, Burnham has been a practicing architect for more than 20 years. In addition to running his 10-person firm, he is an adjunct professor at the California College of the Arts and serves on the executive committee of the San Francisco Museum of Modern Art’s Architecture + Design Forum. He spoke at length with The Registry about his approach to Proxy and what he has learned.

Q: Why did you want to invest so much effort in a temporary project?

A: Because we are architects, we are interested in the city and the evolution of the city as an inhabited and designed thing.

Architects most of the time sit and wait for the telephone to ring and are a service provider to other people. We have been able to change that for this project and probably going forward to other projects.

We are looking at cities in general. How are world cities like Paris, Berlin, London, Budapest, Amsterdam—how do they adapt to seasonal needs of their constituents? In San Francisco we have much less of a seasonal change. But I think we are interested in change and how you can work that into a new model.

Q: Has it been a learning experience?

A: It’s pretty interesting as an architect to be exposed to the owner side of it. We are the landlord, in a way. We are putting the deal together, we are convincing people that this is a good idea and then helping them realize it. We have been able to operate in many different parallel roles. That really increases our control of the process, but also our effectiveness. A lot of what we do is curating. We say, ‘Oh, that person’s business would be perfect here.’ So we reach out to that person.

Q: How well has Proxy performed so far?

A: It actually has taken probably twice as long as we thought it would to implement the components we have been able to realize. I don’t think it diminishes the project, but it is eye-opening how much it takes. Convincing people that they should be a part of it, then getting them to commit, then getting them to sign a lease, then finishing pricing projections on what they want, then probably revising that, and moving forward with fabrication.

I think the project itself has been incredibly exciting. The more pieces that come on line, the more people understand what we are trying to do. I think it has actually gone very well.

Q: Did the temporary nature of Proxy give you more freedom to take risks?

A: There is not a long payback time for ourselves or our investors. That puts a damper on experimentation. But in another sense it is raw, matter-of-fact.

Right now we are working on a rotating chef container with Whole Foods. It is something that is not 100 percent for sure, but it is the kind of thing that our project has created excitement for.

San Francisco has an amazing food culture, where there are a lot of talented chefs and an economically diverse component of the city where people are being trained to start their own business though incubator programs. So the idea is to loop those people through to give them a kind of first showing. They would be there for maybe a week or two weeks.

Q: What kind of costs were involved?

A: We had to bring power to the site. That’s a pretty major investment. The city provided water and sewage to the site, which there was none before. We had to connect to that, at least for the food vendors. Then there is the groundwork, the surfaces that the public is on. Those are on the order of a couple of hundred thousand dollars.

A raw container is something like $5,000 or $6,000 once you have brought it to a place. But you can’t do anything in that except store things. So you add plumbing and electric and insulation. The costs are $40,000 at the very low end and $90,000 at the very high end of what we have done, per container.

Q: How will you recoup the investment?

A: The economic model we have pursued with the food vendors is that they own their own containers, and they pay for the upgrades on the piece of ground they are leasing from us.

There is a pretty simple metric of making sure rent is paid.

But the primary goal is not to make money. It is to figure out how the city can be a place that can be adaptable at a faster pace than at a 100-year building scale. Of course we are watching the books and making sure we are not losing money, but it is almost a full-scale thoughtful experiment.

Q: Have you been able to apply elsewhere what you have learned with Proxy?

A: We have just started a project I can’t really talk about. But we have built up a deep knowledge base of what you can do with these temporary building components—what do scaffold systems cost, what do tent structures cost, what does it cost to do an awning. Because we have supervised the fabrication in a close way, we are very close to people’s budgets, we have build up; a pretty deep database. 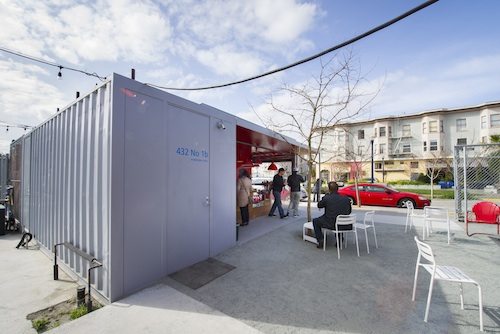