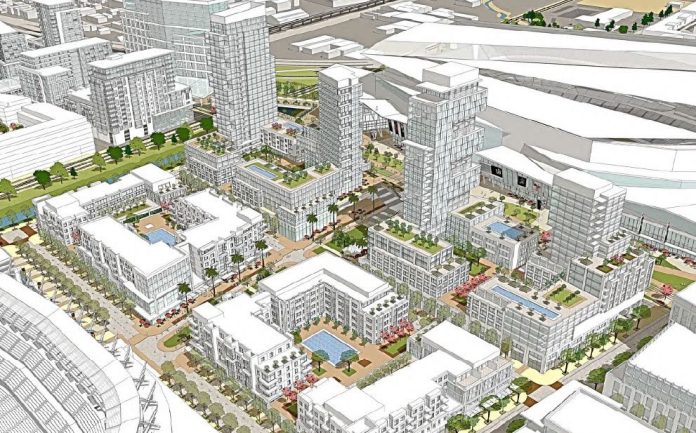 The City of Oakland has taken a step forward in its redevelopment of the Oakland Coliseum. In a unanimous vote on Tuesday, the Oakland City Council gave the green light for the City to move forward with an exclusive negotiating agreement with the African American Sports and Entertainment Group (AASEG), allowing the latter to buy, lease or partner with the City on its 50 percent stake of the site.

“We are humbled and honored to have been chosen by the Oakland City Council to enter into an Exclusive Negotiating Agreement for the acquisition and development of the Coliseum Site,” the AASEG Tweeted after the vote. “Our pledge is to continue to always place the community at the forefront of everything that we do!”

Under the agreement, AASEG would have 18 months to negotiate with the City of Oakland on the development and potential acquisition of the 130-acre site. The AASEG offered $115 million on the City’s undivided interest of the Coliseum Complex and has thus far agreed to other elements of development, including 35 percent affordable housing. AASEG will also cover the Citys’ costs during the negotiation process.

“I am thrilled that we have the opportunity to bring jobs, housing at all income levels, sports, entertainment and more to this vital Oakland site, in a way that strengthens equity and vibrancy for the community at this transit-accessible location,” said Oakland’s Vice Mayor Rebecca Kaplan in a statement.

If AASEG and the City fail to come to an agreement, the timeline can be extended by six months. The City will ultimately receive a nonrefundable $200,000-per-year ENA fee, and $2.5 million to cover City expenses.

Exactly how the site will be developed remains unclear; however, during Tuesday’s meeting,  AASEG said that it hopes the project will generate about 40,000 jobs and $6 billion in economic impact. The organization stated that it intends to build sports and education facilities, affordable housing and a career center. The development would be one of the largest by Black developers in the country.

AASEG was founded by Ray Bobbit in 2020 with the goal of using sports and entertainment to create a route to increase economic equity within the Black Community. Based in Oakland, the organization is striving to create the first majority Black-owned  NFL Franchise. The Redevelopment of the Coliseum site and the creation of a “thriving sports, entertainment, educational and business district,” in East Oakland is part of that vision, according to AASEG’s website.

AASEG is backed by Loop Capital, the largest African American owned, full-service banking and investment firm in the United States. Loop Capital will act as the project’s financial advisor and will raise capital to fund the project as it progresses. Other project partners include 360 Total, headed by Shonda Scott, SUDA LLC, led by Alan Dones, and nonprofit affordable housing developer Bridge Housing.

Also vying for development of the site was Stewart Property Group, founded by former Oakland A’s Hall of Famer Dave Stewart and Lonnie Murray, a sports agent. Like ASSEG, its mission is to create equitable, fair development in East Oakland.

The decision by the Oakland City Council comes just over a year after the Oakland Athletics closed on Alameda County’s share of the Coliseum site for $85 million. The share was formally sold to an affiliate of the A’s, known as Coliseum Way Partners (CWP), and as part of the deal, the A’s and its affiliates will assume operating costs of the complex, which comes to about $5 million annually. The Oakland A’s are slated to play at the Coliseum through the 2024 baseball season. Currently the team is pursuing a new ballpark at Howard Terminal, which would seat 35,000 fans and cost more than $500 million to build, if approved.