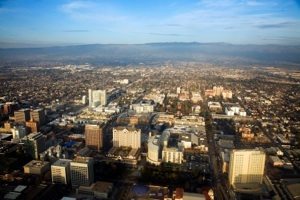 The two- and three-story buildings at 3000 Orchard Parkway and 3030 Orchard Parkway were developed by Palo Alto-based Mozart Development Co. in 2001. According to its Web site, Mozart sold the property in 2006 for $515 a square foot, or more than $63 million.

South Korea’s Samsung Electronics Co. Ltd., a top U.S. cellphone handset seller, occupies all of the space at 3000 Orchard Parkway. Business software maker SAP AG subleases its space to Fairchild Semiconductor International Inc., which uses it for the company’s corporate headquarters. Fairchild is located in all of the square footage at 3030 Orchard Parkway.

Both buildings are considered top-grade and have in-place rents that are well below market rates of $2 a square foot a month.

The property is located in San Jose’s most prestigious industrial concentration with the corporate headquarters of Cisco Systems Inc., the city’s largest employer, around the corner and thousands of existing apartments and new ones under construction.

North San Jose offices saw more than 700,000 square feet of occupancy gains last year and followed that with not quite 35,000 square feet of gains in 2012’s first quarter, according to CBRE Inc. research. But vacancy and availability remain elevated, at nearly 15 percent and 18.4 percent respectively.

“Cupertino, Palo Alto and Mountain View are red hot,” he said. “In 2012, we will see significant improvement in Santa Clara, San Jose and the East Bay.”

Cassidy Turley projects falling vacancy in Silicon Valley office and R&D space through 2014 and rising rents, reaching more than $3 a foot with tenants assuming most costs, including operating expenses and taxes.

The buildings are three miles from the Mineta San Jose International Airport, and a light-rail stop is a block away.

Divco has retained the San Jose office of Colliers International to market the property, including Executive Vice President Fred B. Cordova III and senior vice presidents Andy Zighelboim and Jim Beeger. Neither Divco nor Colliers would comment.