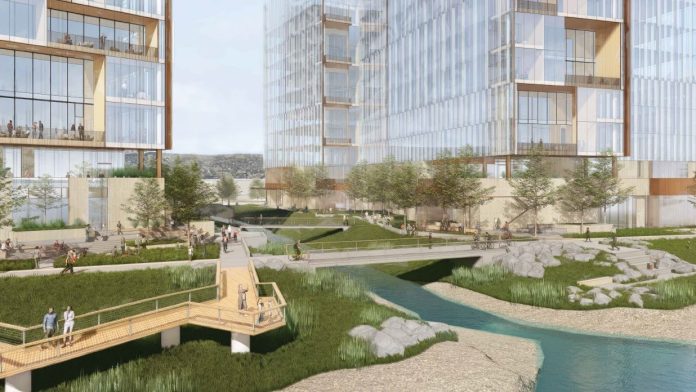 With interest in life science space showing little signs of abating across the Bay Area, a pair of Bay Area developers and investors have unveiled a plan to add roughly 1.46 million square feet of additional space along the shoreline in the Peninsula city of Burlingame. San Francisco-based DivcoWest and partner, Burlingame-based Woodstock, introduced to the city last week its plans to develop Peninsula Crossing, a five-building project that looks to transform the presently underutilized 12 acres of space located at 1200 – 1340 Bayshore Highway. The property is now occupied by a collection of small, low-rise buildings, which are home to a Holiday Inn Express, Max’s of Burlingame and Caribbean Gardens, among other smaller enterprises. The location will be transformed by a collection of 200-feet tall structures that will reshape this portion of Burlingame and connect the quarter-mile gap in the Bay Trail while providing a visually stunning setting along the San Francisco Bay.

Burlingame City Council in a joint session with its Planning Commission reviewed the first-look plans with DivcoWest over the weekend on April 23rd, and it provided a glimpse of what the project may encompass. This was not a meeting where approvals and recommendations were considered; it was a meeting focused on the vision of the project, which provided a setting for the members of the city staff and leadership to ask questions and clarify project goals with the development team.

DivcoWest was represented at the meeting by Virginia Calkins, a senior development manager with the firm, who provided a detailed overview of the project and its goals.

“We wanted to find in the Bay Area a location for [an ambitious] bioscience development,” said Calkins. “Our goal for Peninsula Crossing is to set a standard for development in Burlingame and the broader Peninsula region. We plan to deliver a broad range of benefits to the city and the community ranging from the completion of the Bay Trail to economic development, from sea-level rise protection to placemaking.”

The majority of the presentation by the development team focused on this aspect of the project: The team highlighted the benefits of connecting a network of parks with the Bay Trail with the four-acre open space park at Peninsula Crossing and other recreational spaces along the Bay. This would be enhanced by public spaces where food trucks could gather, small outdoor events could be organized and a 5,000 square-foot public cafe space in one of the buildings.

However, one of the most important aspects of the project would be incorporating a sea-level rise ordinance into the development, This would entail over $20 million of shoreline infrastructure designed at a 17-foot high crest elevation for 100 years of resilience. This type of future protection would set a standard for water level rise resiliency in the city and broadly, as well. This part of Burlingame is at increasing risk of floods in the future, and the project is hoping to contribute meaningfully to protecting the city and businesses in its vicinity.

The development would also deliver a number of sizeable benefits to the city. The project team is proposing $54 million in one-time fees, which would incorporate a $35 million affordable housing fee, a $4.5 million Bayfront development fee and a $14.5 million public facilities impact fee.

In addition, the City is looking to gain approximately $3.1 million in annual revenue along with 4,000 to 5,000 high-earning life science jobs and another 300 jobs that would be created during the construction phase of the project.

The newly-created life science hub would also benefit neighboring businesses and hotels as the cluster expands and brings additional workers to the region.

DivcoWest and Woodstock hope to finalize planning and applications by the summer of 2023 when they would like the construction to start. The project overall does not utilize the full extent of the allowable development on-site, something DivcoWest wanted to highlight. The allowable project incorporates a FAR of 3.0, which translates to 1.57 million square feet of space on site. After considering community needs and a project that would resonate with the City Council and the Planning Commission and one that the city identified is located in the district that is focused on employment growth, DivcoWest and Woodstock opted to bring to life a project that incorporates a lower FAR of 2.79, which translates to 1.46 million square feet.

“DivcoWest aims to establish Peninsula Crossing as a new place, integrating a preeminent life science development and lush public parks into the city of Burlingame,” said Calkins. “We are going to convert this collection of derelict buildings and parking lots into a hub for life science innovation surrounded by revitalized natural open space and linked to the community by the Bay Trail.”