New York, N.Y. – November 7, 2012 – The Dodge Momentum Index slipped another 0.6% over the month in October, according to McGraw-Hill Construction a division of The McGraw-Hill Companies. The Momentum Index is a monthly measure of the first (or initial) report for nonresidential building projects in planning, which have been shown to lead construction spending for nonresidential buildings by a full year. The October Momentum Index retreated to 93.3 (2000=100), the third consecutive monthly decline following the most recent peak of 96.0 in July. After bottoming out in mid-2011, the Momentum Index had shown a hesitant upward trend through July of this year, with monthly gains outweighing setbacks. The recent loss of momentum for the index over the past three months can be attributed in part to the high degree of uncertainty affecting the U.S. economy and construction industry, reflecting the U.S. presidential election and the looming fiscal cliff. In addition, plans for institutional building projects were particularly strong in recent months, but that strength dissipated in October given the continued tight budget conditions faced by states and localities.

The drop in the October Momentum Index was due entirely to a 1.3% decline in its institutional segment. In particular, the volume of publicly-financed construction projects eased as fewer large-scale healthcare projects entered the planning phase. The decline in institutional building plans was partially offset by stability for commercial building plans, following lower activity in this segment during the prior two months. The commercial building segment in October was helped by an increase in new plans for office projects, including an Apple data center in Prineville, OR and a new headquarters for Samsung in San Jose, CA. Store projects entering planning also ticked modestly upward in October, supported by new plans for an outlet mall in Georgia. 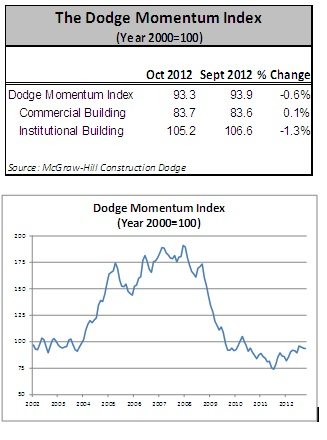 About The McGraw-Hill Companies
McGraw-Hill announced on September 12, 2011, its intention to separate into two companies: McGraw-Hill Financial, a leading provider of content and analytics to global financial markets, and McGraw-Hill Education, a leading education company focused on digital learning and education services worldwide. McGraw-Hill Financial’s leading brands include Standard & Poor’s Ratings Services, S&P Capital IQ, S&P Dow Jones Indices, J.D. Power and Associates and Platts, a leader in commodities information. With sales of $6.2 billion in 2011, the Corporation has approximately 23,000 employees across more than 280 offices in 40 countries. Additional information is available at http://www.mcgraw-hill.com/.