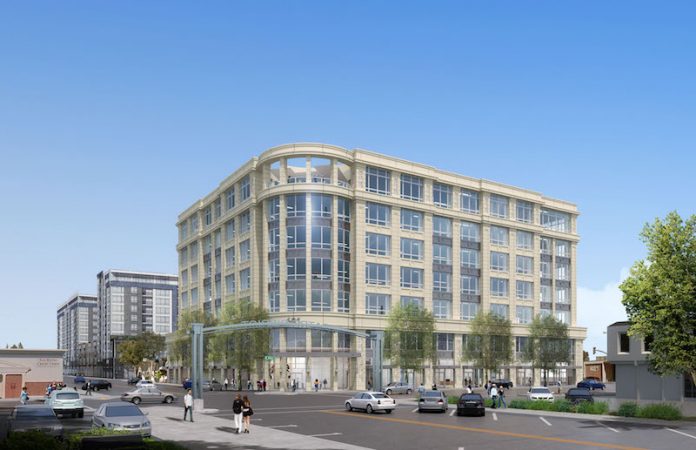 Palo Alto-based Dostart Development Company will soon start construction on its 133,000 square foot Class A development in Redwood City. The LEED Platinum pre-certified, 8 story structure will be the newest office development in the Peninsula city that is undergoing one of the most dramatic transformations in the Bay Area.

Dostart had compiled an assemblage of four lots and paid just over $15 million to acquire the land in downtown Redwood City for its office development at 601 Marshall Street, according to public records, and it is eyeing completion by Thanksgiving of 2017 and occupancy as early as December of 2017.

[contextly_sidebar id=”ZcniBNdFHABS8hfac4xrxKuVees90MFp”]Dostart declined to comment on what it paid for the land when contacted for this story.

The total development cost of the project is estimated to be in the range of $105 million to $110 million, according to sources familiar with the project. Around 65 percent of the project is being covered by J.P. Morgan as the construction lender. Glendale, Calif.-based American Realty Advisors has made a preferred equity investment into the project.

The debt and equity for the project was arranged by San Francisco-based Regency Capital Partners. “There was a significant amount of debt and equity interest in the development. We have four to five parties interested in providing either the debt or equity for the project. I think there would have been a lot more if the project was not a spec development,” said Ramsey Daya, a principal with Regency Capital. He was involved in attracting both capital sources to the development.

Dostart feels good about starting a spec development in downtown Redwood City at this point in the market cycle. “We think that developing this kind of project in a vibrant, transit-oriented downtown as special as Redwood City is a unique opportunity at any point in time,” said Mollie Ricker, a partner with Dostart Development.

The development is in the Redwood City downtown core, just two blocks form the Caltrain station and easy access to both I-280 and US 101. Over 2,000 residential units will be within walking distance of the project. Although the building will be eight stories tall, only the top five floors will have office space of approximately 25,000 square feet. There is an additional 6,100 square feet available on the ground floor, according to the marketing brochure.

The asking rents in the project are no less than $6.00 per square foot NNN, according to sources with knowledge of the project. The developer is looking at attracting a mixture of technology and service type of tenants.