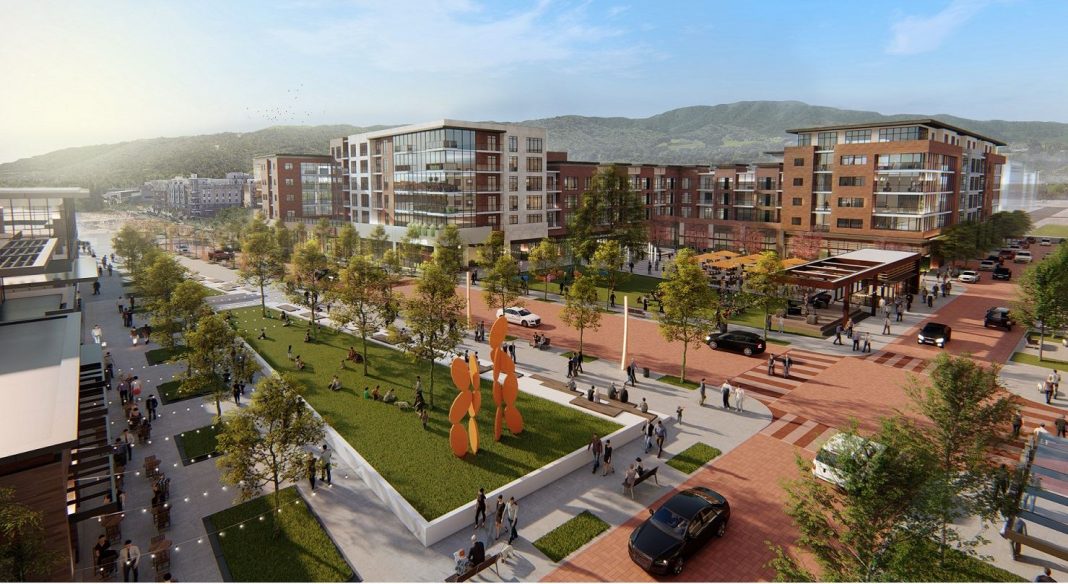 Dublin takes the first step to create a new downtown

The City of Dublin, California is nestled within the Tri-Valley, a trio of communities located in the East San Francisco Bay Area. Despite being one of the fastest-growing cities in the state — it grew by 4.5 percent in 2018 and now has more than 50,000 residents, according to U.S. Census Bureau data — Dublin has grown almost awkwardly since its formal induction into city-hood in 1982, with slews of new housing developments and schools rapidly extending eastward along the local interstate. However, Dublin still lacks a truly unifying and physical heart, although it has not been for lack of effort.

Over the past year, the City of Dublin has been working to formally create a vision for its long-awaited downtown, central business and retail districts. In November, officials unanimously voted to approve the Downtown Dublin Preferred Vision based on three main principles: the siting of a new town square, a new street grid network and downtown’s expected character.

“I am really excited about this. We’ve heard over and over and over again from our residents that they want a downtown. They want a pedestrian-friendly downtown,” said councilmember Jean Josey prior to the council’s vote. “This has been the number one priority for our residents, and this is the one thing that is within our power to do.”

This has been the number one priority for our residents, and this is the one thing that is within our power to do

In conjunction with the community, officials have consulted both Urban Field Studio and ELS Architecture to help create Dublin’s preferred vision for the future.

Indeed, long-time residents of Dublin have often found that the closest thing to downtown has been Hacienda Crossings, a mixed-use retail and entertainment center anchored by an IMAX theater and a mix of big-box retailers such as Barnes and Noble and Best Buy. And for many, there has always been a distinct divide between the older and newer parts of town, with locals often referring to the East and West sides of Dublin when talking about growth, development and demographics, among other things.

The hope is that the proposed town square will serve as the epicenter of downtown Dublin’s future gathering space. Upon completion, the one-acre square will include a market promenade, outdoor dining and event space, for which numerous types of programming from a local farmers market to yoga in the park have been proposed. The City intends to place the square one block of Dublin Boulevard in the Dublin Place shopping center, located at 7200 Amador Plaza Road. Currently, the shopping center is anchored by a Target, Hobby Lobby and Burlington Coat Factory.

Properties in the surrounding four blocks will be of a mixed-use character, building off of a city precedent set by development surrounding the West Dublin and Pleasanton BART Station. In planning documents, the City recognizes the need for not just stand-alone retail but also an on-site community that will guarantee the vibrancy of downtown.

“Successful, vibrant downtowns have a diverse economic base that includes a mix of retail, restaurants, services, entertainment, office space, housing and hotels. Concentrating this mix of uses in a four-block area that is more pedestrian-friendly, and designed for interaction, will create synergy for shops and restaurants to thrive,” stated Christopher Foss, Dublin’s city manager in a November 5th city staff report to Mayor David Haubert and the City Council.

In addition, the city’s new street grid will break down its current, large block format with the goal to extend Golden Gate Drive north of Dublin Boulevard — currently the city’s main thoroughfare apart from Interstates 580 and 680 — to Amador Valley Boulevard. The plan is to create a town square and a quintessential Main Street that so often serve as the gravitational center of suburban America.

The City has a long way until the plan is formally brought to fruition, since the preferred plan lays out development for Dublin’s downtown over the course of the next 30 to 50 years. However, it is a critical first step that residents have been anticipating for decades. With approval secured, the city can pursue General Plan amendments for may future developments and move forward with Phase One, which aims to complete the town square by 2025.

“It’s a vision…It’s a tectonic shift in the way that we have approached the downtown in the past,” said Linda Smith, Dublin’s assistant city manager. “This is the first step in the number of future and subsequent actions this council would have to take to carry out this vision…We are going to take this and make it happen.”