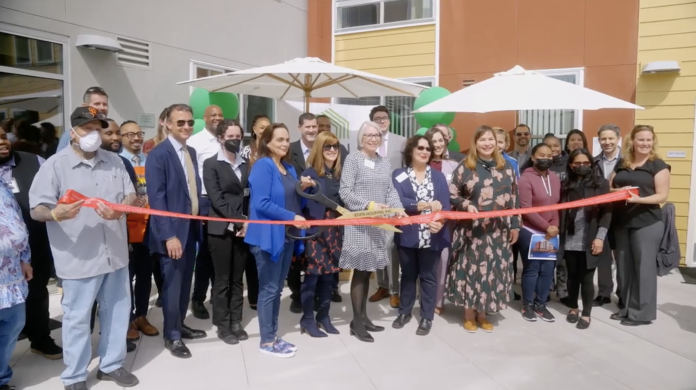 Loro Landing was designed for low-income households, veterans, homeless and most vulnerable members of the San Leandro community

Alameda County, like many parts of the Bay Area, has endured an affordable housing crisis. Over the last several years especially, this county has experienced a significant increase in unsheltered homeless and a growing lack of affordable housing units. In fact, over a third of
renter households in high-poverty neighborhoods are estimated to be spending more than 50% of their income on rent.

To address this ongoing crisis, Alameda County’s Board of Supervisors issued the Measure A1 $580 million general obligation bond in the November 2016 election to fuel the community’s rental housing development emergency fund. The positive impacts of this measure have
continued to spread in creating permanent affordable housing, and now with the Loro Landing high-quality, 62-unit apartment complex located in the city of San Leandro.

The Loro Landing affordable housing development is the most recent project from Eden Housing, a nonprofit with more than half a century of experience providing homes to individuals and households who are essential to building a strong and diverse community, but
are currently being priced out of California’s competitive housing market. The Loro Landing units are available to applicants earning between 20% and 60% of the area median income, with approximately half set aside for homeless and lower-income veterans.

“We are delighted to see this project come to fruition and welcome the first wave of residents to Loro Landing,” says Linda Mandolini, President of Eden Housing. “We are proud of this beautiful development that will provide housing to some of the most vulnerable members of our community. We appreciate the support of the citizens of San Leandro and all who came together to make this important project a reality.”

Several leaders from Eden Housing’s team, as well as notable local and state officials were present for the ribbon cutting and to meet with media, Loro Landing residents and other members of the community. During the celebration, the District Director for the Honorable
Assemblymember Mia Bonta awarded a commendation to Eden Housing for its invaluable work in affordable housing.

“We are very proud of the Loro Landing development, which is yet another example of the positive impact Measure A1 has had in creating permanent affordable housing,” said Supervisor Dave Brown, Alameda County Board of Supervisors. “The Board has worked very hard to put
this measure into effect to address the lack of affordable housing and prevent displacement of our low-income households, which include veterans.”

About Loro Landing
Loro Landing offers 62 rental apartments in a mix of one-bedroom, two-bedroom and studio configurations for individuals and households earning between 20% and 60% of the area median income, equivalent to an annual income of $20,000 to $60,000 for a two-person
household. This transit-oriented development was designed with sustainability in mind, with features such as solar panels on the roof, low-flow water fixtures, Energy Star appliances and dedicated bike parking, and will be Green Point Rated certified. It also offers a wide range of
practical amenities including a computer learning center, community room, laundry facilities and an outdoor courtyard with planters for growing fruits and vegetables. Resident services will include wellness, career, education, and financial literacy programs.

About Eden Housing
Eden Housing is a non-profit organization with more than 50 years of experience providing safe and affordable housing that helps families stay secure, allows communities to thrive, and solves many of the most pressing housing challenges facing California cities. Since its inception, the Bay Area-based organization has developed more than 10,000 affordable homes and is a leader in making its residential communities environmentally sustainable and efficient through integrating energy conservation. Eden is also known as a champion of housing policy advocacy at the local, state, and national level, supporting practices that both create and preserve affordable housing for diverse communities.