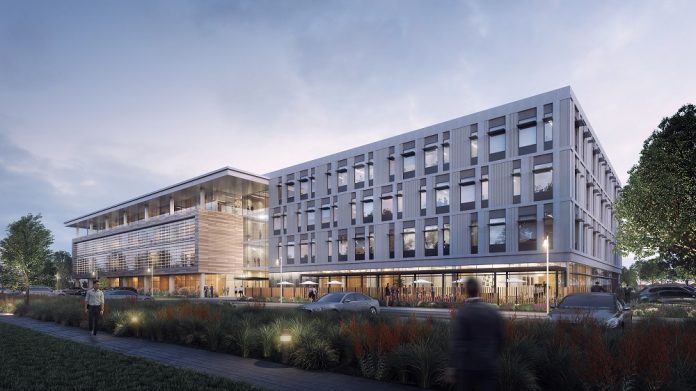 A growing life science company that develops and commercializes drug treatments for cancer, Exelixis relocated its headquarters from South San Francisco to Alameda two years ago. They initially performed laboratory and office improvements in two buildings at The Waterfront campus, and with its continued R&D and commercial successes, have been able to expand in-place to now occupy four of the six existing buildings at The Waterfront, adjacent to the future build-to-suit site. srmERNST and Hillwood recently acquired the Waterfront, a six-building, 385,000 square foot campus, as part of their build-to-suit strategy supporting the growth of Exelixis. The property line improvements between The Waterfront campus and 1951 Harbor Bay Parkway will be reconfigured to fold in the new building and create an integrated campus environment. The project will incorporate sustainable design features, as well as provide a transit-friendly campus once completed. Development is expected to start in summer of 2020.

“Harbor Bay Business Park is quickly expanding as businesses migrate from San Francisco and the Peninsula for better growth opportunities,” said Joe Ernst, President at srmERNST. “We’re excited to see the expansion of companies like Exelixis continue the evolution of this area into a great place to do important work.”