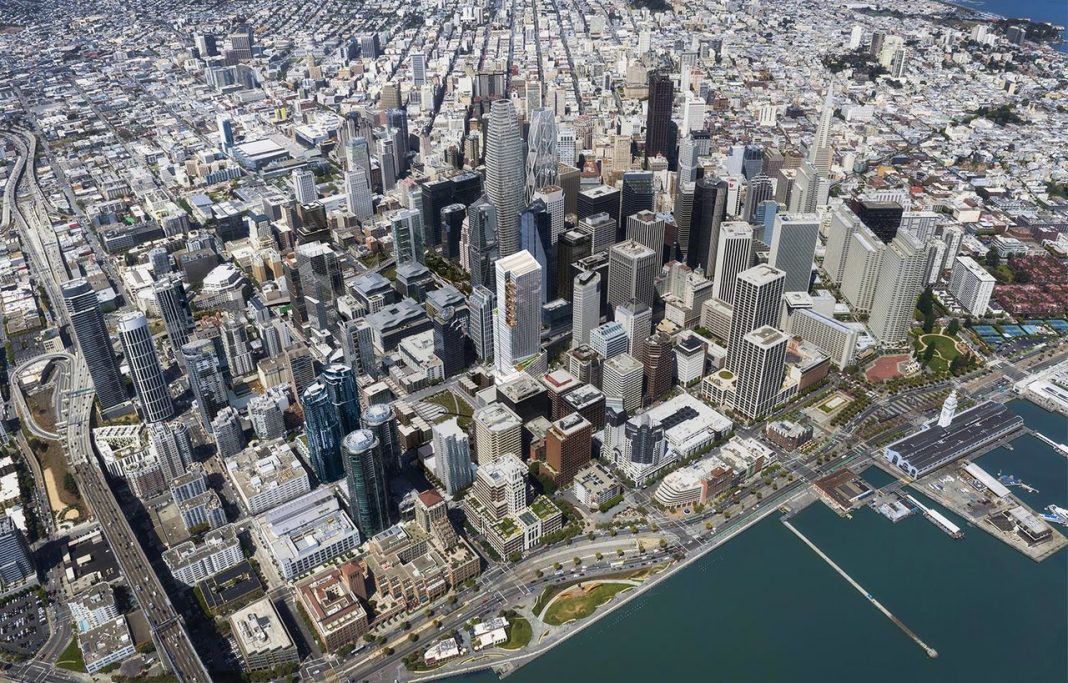 Facebook is the king of San Francisco. According to sources with knowledge of the market in the city, the social network enterprise is looking to expand its footprint in the city by the bay dramatically by taking the entire 43-story, 750,000 square foot Park Tower building in the city’s Transbay neighborhood. This is a massive move on the part of the company and an important marker for the leasing market in San Francisco, overall.

The Park Tower, a project at the corner of Howard and Beale Streets in downtown San Francisco, is the realization of two Chicago-based companies, The John Buck Company and Golub Real Estate, which spent $172.5 million to acquire parcel 5 from the Office of Community Investment and Infrastructure in partnership with the Transbay Joint Powers Authority in 2015. It was lauded at the time as a project that would continue the transformation of the Transbay neighborhood, which at the time had already begun to shift the city’s center of gravity south of Market Street.

In October of 2015, MetLife made a $345 million equity investment into the Park Tower for which it acquired a 95 percent ownership stake in the project. With the total development cost of the project at the time projected to be in excess of $690 million, it was another massive undertaking in the city that was already beginning its transition into a global technology center.

The building, which was designed by Goettsch Partners in collaboration with Solomon Cordwell Buenz, will have 43 stories with around 750,000 square feet of office space. The floor plates will vary from 12,000 to 27,500 square feet. There is subterranean parking for 124 spaces and 10,000 square feet of high-end ground floor retail. In addition, 70 percent of office space in the building will enjoy water views, and 14 floors will feature exclusive sky decks, according to the marketing materials for the building.

The leasing in the building was led by the San Francisco office of JLL, which was represented by Christopher T. Roeder, Wes Powell and Steven A. Anderson.

“Park Tower at Transbay is going to be a game-changing addition for companies looking for a world class headquarters building in San Francisco. The design is spectacular, and the development concept is sustainable and imaginative. The project is representative of the two highly experienced development firms that are determined to provide an exponentially more powerful vision for workplace and community. They will drive the success of this key Transbay asset with financial muscle and a globally proven track record,” said Christopher Roeder, international director for JLL in 2015 when it was announced that his team would lead the leasing efforts.

Facebook has been very aggressively expanding across the region over the last few months. In September of 2017, The Registry broke the news that the company was planning to take 432,000 square feet, or all of the commercial office space at Jay Paul’s 181 Fremont building in San Francisco. In April of 2018, the firm announced that it was taking 200,000 square feet at WeWork’s subleased office complex in Mountain View at The Village at San Antonio Station. Just a month earlier, Jay Paul and Facebook inked a deal for the tech giant to take nearly a million square feet, or five buildings in the developer’s Moffett Towers II project in Sunnyvale. That deal followed 100,000 square feet Facebook took from Bohannon Company at 220 Jefferson Dr. in Menlo Park. The building is just blocks away from Bohannon’s Menlo Gateway project, a massive mixed-use development that at completion will feature approximately 773,000 square feet of office space all pre-leased to Facebook. In December of 2017, Facebook leased 190,000 square feet in two buildings at the Ardenwood district in Fremont, where it could bring as many as 1,000 employees. These two buildings were leased from the Sobrato Organization.

The deal at Park Tower also marks a new watermark for leases in San Francisco. At 750,000 square feet, this transaction is the largest office lease signed in the city ever. It was preceded by another record-breaking transaction just months ago, in October of 2017, when Dropbox signed a 736,000 square-foot lease at Kilroy Realty’s Exchange on 16th to take the entire building. The leasing team on this development was led by CBRE’s Bill Cumbelich, Mark Geisreiter and Sherman Chan. The previous record was signed by Salesforce at what is now called Salesforce Tower for 716,000 square feet. Those leasing efforts were led by Dan Harvey, who worked at Cushman & Wakefield at the time.