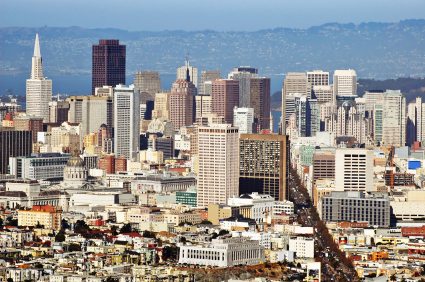 The San Francisco Bay Area, already the strongest office market in the nation, is likely to remain so for as long as the next five years, according to new projections from real estate research firm Green Street Advisors. 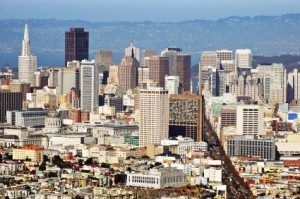 “It is the market in the country with the best secular growth story, the most compelling growth in rents and among the highest barriers to entry,” said Jed Reagan, an analyst and senior associate with Green Street.

The region is benefitting not only from the technology industry’s global strength but also by comparison with the less-promising prospects for rival “gateway” markets including Washington, D.C., New York City and Southern California.

The great expectations have not gone unnoticed. Green Street is tracking 4.8 million square feet of new office developments in San Francisco in 10 projects, an approximately 10 percent increase in the existing Class A office inventory in the Financial District and South of Market.

Land sales and long-term ground-lease activity involving property zoned for office or workplace use also have picked up in Silicon Valley, said Jim Beeger, a senior vice president at Colliers International. Year-to-date, companies have worked with developers to secure nearly three million square feet of new offices built to their specifications in 11 transactions.

But there is discomfort amid the happy signs. Bay Area office-market dynamics taken for granted in previous recoveries have not held in this cycle. Leasing demand in San Francisco’s North Financial District has been very different from the dot-com period, and San Jose’s famed North First Street corporate corridor and downtown are sputtering even as proximate geographies are seeing explosive leasing demand from the technology industry.

New numbers from Colliers International in San Francisco show Class A rents for North Financial District offices that were $81 a foot a year in 2000 at the dot-com peak are now $48 a foot—slightly less than that for class A and B offices South of Market.

“In the last tech boom, Silicon Valley was the center, and San Jose fared very well,” said Reagan, who also follows the activities of Boston Properties Inc. and Kilroy Realty Corp., publicly traded office landlords that are investing billions of dollars in the Bay Area—primarily San Francisco. “This time, the city of San Francisco is the core of tech strength, and the southern end of Silicon Valley has effectively shifted north to Cupertino and Mountain View.”

“San Jose has been left behind,” he said.

The new San Francisco office supply, Green Street says, may spell trouble later for landlords by keeping office rents from rising as quickly as contemplated. Moreover, Green Street asserts, when you evaluate office demand growth in the city since 1996, some years reflect huge swings to the positive, but overall, with huge demand contractions in the early 2000s and a less severe but sizable retrenchment in 2009 and 2010, the region has not seen meaningful demand growth for at least 16 years.

North San Jose “is an absolute nightmare,” John Kilroy, chief executive of Kilroy Realty Corp., recently told stock market analysts. “A good 70 percent of the square footage you see in Silicon Valley is really antequated to the point where it is obsolete. We wouldn’t buy it, and that is why you see folks reaching out to build new campuses, which plays right into our strength.”

He has given up trying to predict the trajectories of the regional real estate cycles, John Michael Sobrato, head of The Sobrato Organization, said. “I have absolutely no idea. I thought in 2007, ‘Finally, our day in the sun.’ Then in 2008 we are back to the dot-com crash.”

Eli Khouri, chief investment officer for Kilroy and a long-time Silicon Valley real estate player, concurred: “I think we are tremendously good at not knowing, and the best approach is to admit it.” At Kilroy that has translated to aggressive acquisition and development plans in San Francisco, Redwood City, Menlo Park and Mountain View, tempered with low levels of debt.

“If we did learn from 2007, it is that real estate should not be levered at 70 percent,” Khouri said. Kilroy’s overall portfolio has historically carried debt of about 35 percent and continues to do so, company executives said on their third-quarter earnings call with analysts.

Cupertino-based Sobrato is a long-time Silicon Valley landlord with a 7.5-million-square-foot commercial portfolio in the Bay Area and 7,500 apartments in the Western United States, including locally. Sobrato’s approach is to avoid euphoria when times are good and to buy when the market is at its most depressed and others afraid, he said: “It is hard to do, but it is the best way to profit from the real estate business.”

Given the wall of money looking to invest in the Bay Area now, Sobrato is not buying. It recently sold the first apartment complex it ever built “with 30-year-old cabinets and 30-year-old siding” to Essex Property Trust Inc., Sobrato said. The Palo Alto real estate investment trust expected to reap a 4 percent return going in.

At work in the fading prospects for some areas of the appear to be demographic forces affecting markets nationwide, where the Millenials, or baby boomers’ babies, are pushing back into central cities to use bicycles and public transit for work and life. “We have been talking about urbanization for 10 years, but this is the first time I’ve seen the realization,” CBRE real estate economist Asieh Mansour said at the 2013 outlook.

Mansour projected tepid national economic growth next year, a 1.8 percent increase in the inflation-adjusted gross domestic product—a slower rate of increase than in 2012. CBRE predicts the U.S. economy won’t fully heal until 2015, when it will finally recover the five million jobs more that it needs to bring the workforce back to its numbers before the 2008 financial crisis, she said.

Despite the Bay Area’s seemingly tectonic economic shifts, Green Street’s Reagan notes that office leasing in San Francisco’s North Financial District—though relatively weak compared to red-hot South of Market—is still stronger than in many other markets nationwide. Financial and professional service firms and law firms still represent a significant tenant base, he said, though they are not growing now and there is broad understanding that these types of companies will use less square footage per worker in the future.

As long as that reputation remains intact, the talent will continue to roll in, and companies looking to capitalize on that brainpower will be following right behind them, he said.