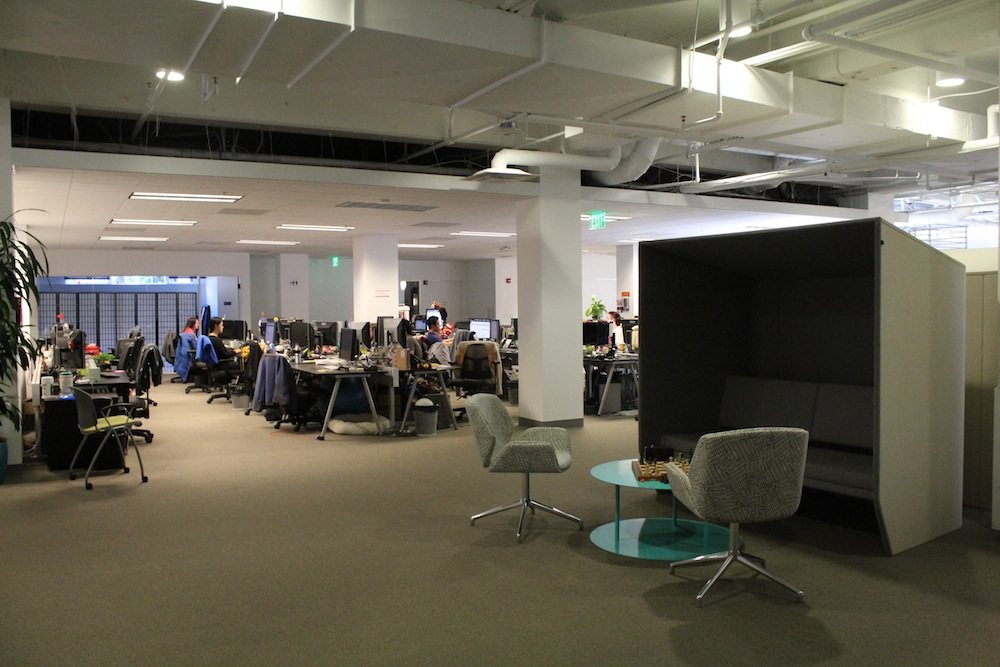 The drive for greater office-worker density is hitting a wall.

Findings from a new Gensler survey of 2,035 American “knowledge workers” suggest that a corporate strategy of using cities like San Francisco as extensions of offices can successfully fill gaps in the mushrooming variety of workspaces.

But the same survey also cautions against too much squeeze, especially just to save a nickel on real estate: Not enough workspace is being dedicated to cultivating deep thought, either alone or in groups, and it is lowering productivity and job satisfaction.

According to the 2013 U.S. Workplace Survey by architects and workplace experts at Gensler, workers said they are frustrated and less effective because their offices don’t support serious thinking. That deficit in turn affects the quality of their collaboration and ultimately undermines business success.

Workers say they are spending 13 percent more time on work that requires deep concentration than they were in 2008—54 percent of their work hours compared to 48 percent five years ago. But the “effectiveness” of that focus work has deteriorated.

Ironically, in the pursuit of greater worker collaboration, employers are adding space to encourage interaction even as workers say they collaborate less—spending a quarter of their weekly time working with others, down from a third.

“For a long time in our industry, there was an overreliance on collaborative spaces at the expense of everything else,” said Randy Howder, Gensler’s lead workplace strategist in San Francisco and a member of the Gensler team that helped conceive the study questions and interpret results. “The buzzwords have been collaboration and collaboration-equals-innovation.”

The survey shows “you just can’t throw people out of their private offices and expect them to collaborate,” he said.

The research is Gensler’s latest in a series initiated in 2005, which linked workplace design to worker productivity and business success. In a 2008 study Gensler defined the “knowledge worker” based on work “modes” adopted to complete tasks: focus, collaboration, learning and socializing.

Gensler concludes in an executive summary of the 2013 survey findings: “While the proven connection between collaboration and innovation remains, our research suggests that the strategies often used to achieve it—open workplaces, low- or no-panel desks—aren’t hitting the mark. As a result, focus work has been compromised in pursuit of collaboration. Currently neither is working well.”

The workers come from 10 industry segments, including the technology, Internet and telecommunications sectors; the biotech and pharmaceutical industries; and the professional services, including accounting and consulting, Gensler said. Workers responded anonymously and at random; the findings are considered statistically valid.

Gensler knew from ongoing proprietary research surveying its own clients that U.S. workplaces were not supporting focus work as in the past. The only activity workers said they are doing more in 2013 is socializing, the survey found. Free time with work peers now accounts for 8 percent of the average workweek, up from 6 percent in 2008.

Kevin Manning, managing director of corporate services for Colliers International in San Jose, said the open-plan office has come like a storm: “The workplace has undergone the most dramatic change in the last four years that it has in the last 40 years, and we have experienced the shift from Silicon Valley to San Francisco.”

Manning studied architectural psychology as an undergraduate and has had a career working as a corporate real estate director for companies such as Atari Inc. and Digital Equipment Corp. and as a corporate services director for Colliers and other brokerages.

Today’s open office is an outgrowth of the post-World War II German workplace model “burolandschaft,” or “office landscape,” he said. He hears the same irritations with the approach from clients today that he did in the 1970s when he completed a workplace study about open-plan offices with grant funding from the National Science Foundation, he said. Noise and privacy are problems.

“I think there are people questioning if it is effective from a cost perspective, and at the same time the viability of benching is being questioned,” he said. He does not doubt that the open-plan office “is here to stay and likely will receive its way-overdue time in the sun for decades to come.”

“It remains to be seen if there is appropriate push back on the current trend, and if the pendulum of style and social pressure centers itself,” he said.

Bay Area companies such as Google Inc. and Facebook Inc., for whom Gensler has worked, have led the way nationally in rethinking the workplace, Howder said. They’ve “treated workers like their customers” to understand what space and other tools they need to achieve the company’s goals.

“I think a lot of our clients here [in the Bay Area] have been understanding this for a while. Giving everyone bouncy balls and beanbag chairs doesn’t mean collaboration. Innovation is a lot of hard work,” Howder said. “Every space has a purpose, even socializing.”

“At Facebook, we built a coffee shop, and it is a hub of people with their laptops talking. That is a conference room.”