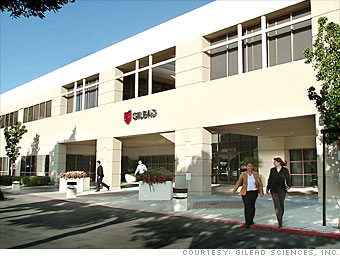 Foster City-based Gilead Sciences Inc. has agreed to pay $180 million, or $610 per square foot, to acquire 303 Velocity Way in its hometown. The 10-story building is the current corporate headquarters of Electronics for Imaging Inc. The sale is expected to close in October.

Gilead’s current corporate headquarters at 333 Lakeside Drive is close to 303 Velocity Way, which has 295,000 square feet. “This will end up being an expansion of our corporate campus operation,” said Nathan Kaiser, a Gilead spokesperson.

Both the existing headquarters building and the acquisition have laboratory and administrative space, Kaiser said. He did not know how many additional employees the new building is expected to accommodate. 303 Velocity Way was developed in 1999.

The biopharmaceutical company reported net income in the second quarter of $711.6 million on revenue of $2.41 billion. That was up from $2.14 billion in the same period a year ago though net income was down from $746.2 million in 2011’s second period.

The sale allows EFI to remain in the building for another year after the transaction closes.

“I think that when you consider who the buyer is and where the property is located it’s a price that shouldn’t really surprise anybody,” said James Bennett, a senior vice president for Kidder Mathews in its San Francisco office with expertise in the life science industry.

The Registry - January 27, 2023 0
By Catherine Sweeney While only the beginning of the year, the commercial real estate industry is already beginning to see new trends take shape. To...