Just weeks after Google’s Vice President, Chris Rackow, sent a memo to employees delaying the company’s anticipated return to the office, the firm has executed a deal to purchase more offices in Mountain View. According to reporting by The Mercury News, Google has paid $73.5 million for a two-story office building at 1665 Charleston Road. Google paid for the property in all cash.

1665 Charleston is located right across the street from the Googleplex, Google’s corporate headquarters, as well as its Google B46, Google PLY1, PLY2 and PLY3 offices. The property is just off of State Route 101 and is near the Shoreline Athletic Fields, Moffett Field, and more.  Microsoft’s Silicon Valley Campus, as well as NASA’s Ames Research Center, are also nearby.

Google is committing to its future real estate needs, even as the Omicron variant delays its return to the office once again. Originally, the company was slated to return January 10th. Prior to the delay, Google stated that it had reopened about 90 percent of its offices, although less than half of its workforce returned to their physical space.

Nevertheless, Google is moving forward with big projects, including its plans for Downtown West in San Jose. The 80-acre mixed-use development will include up to 7.3 million square feet of office space as well as 4,000 units of housing, 500,000 square feet of retail and more. Google anticipates that the campus could accommodate 20,000 new employees.

Beyond San Jose, Google endeavored to deploy more than $1 billion in capital in California over the course of the year. The goal, according to Sundar Pichai, CEO of Google and Alphabet, was to invest in real estate and data centers in a way that will continue to expand Google’s reach, creating additional economic impact. 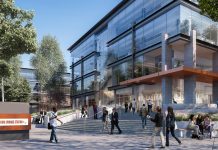