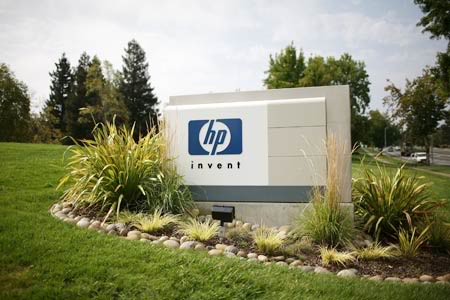 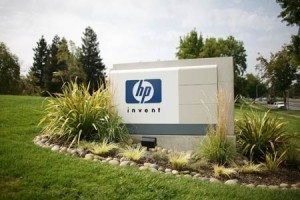 With a massive, craggy California oak anchoring its fully enclosed courtyard, the modern addition including a new central lobby illustrates the company’s connection to past and future. “Walking into this building makes all Hewlett-Packard employees feel proud. It opened a few weeks ago, and I see HP employees walking a little bit taller in this center,” Whitman said.

In a brief appearance and speech, Whitman said the formal unveiling of the 38,000-square-foot headquarters addition, with its 40-foot ceilings and entirely glass façade, had drawn the company’s board of directors and many of its executive staff. She thanked the city of Palo Alto, Gensler, general contractor Rudolph & Sletten “and all of the HP employees who helped make this happen.”

“It went on under three CEOs and is a true labor of love,” she said.

The two-level center at the northern end of the existing headquarters building at 3000 Hanover St. features natural materials including dark wooden floors and sparkly ragged-cut white marble accents on the walls. With vast stretches of windows overlooking the courtyard, the space is imbued with natural light. The company did not release a construction cost.

The first time he went to Hewlett-Packard to talk about the concept, he was told, ‘If it really were a choice, it would be a tent,’ said Hao Ko, the Gensler architectural design director for the project. The result is a structure where the outside world is never out of sight. “It is an immersive experience here,” he said.

Customers from the world over are expected to migrate to the site, often spending a couple of days learning about HP products. A handful of the product offerings are featured in the building’s “Techworks East” and “Techworks West” rooms as works of art, spotlighting and all.

More than anything else the space could best be described as a “technology museum,” said Chuck Albright, the Gensler interior design director. The company anticipates 8,000 visitors annually, and the briefing center includes a fully staffed concierge service.

Alexa Lallos, the vice president of global marketing, said she had shepherded the project from conception to completion. She leads the team that is now operating in the center every day. For Lallos, the center represents a new beginning for Hewlett-Packard and embodies the company’s commitment to California and Palo Alto.

“It is exactly what we envisioned it to be,” she said.

Besides the lobby, concierge station, the two “Techworks” galleries, the center has a horizontal, multimedia band near eye height with a written narrative and photos that tell stories about HP and its clients, such as Magnum Photos. The center has seven meeting rooms, the largest being 32 seats, the smallest nine. Each has an outdoor balcony for the hourly stretch and breath of fresh air. A “nerve center” houses the briefing center’s staff and information technology support.

The first time Lallos walked into the completed building, despite her deep involvement in its creation, “I was stunned,” she said. “It is so beautiful.”