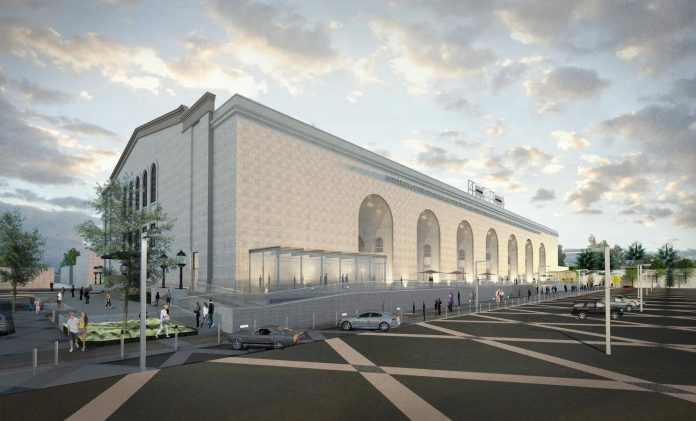 After more than 100 years operating at Oakland’s cultural center, the Oakland Auditorium is getting a facelift while on the hunt for a new array of tenants. After opening in 1915, the auditorium has a history of hosting conventions, concerts and other events. After nearly 15 years sitting vacant and empty, property owner Orton Development Company  is looking to fill its halls with like-minded, community-oriented tenants once again.

“We are just so excited about the location and Oakland, and bringing this building back to life.,” said Colliers International Executive Vice President Aileen Dolby, who is helping to spearhead the property’s leasing. “It is so gorgeous. It is an amazing facility.”

Over the years, the auditorium has been of critical importance to the Oakland community. In 1918, the auditorium was converted into a hospital as the flu epidemic raged on. Decades later, Elvis would play at the theater, and Dr. Martin Luther King Jr. would deliver a speech in 1962 as the civil rights movement gained traction.

The center’s closing in 2005 was the unfortunate result of a financial deficit. It would be nearly 10 years before Orton was pitched its proposal—and won— initial city approval to breathe new life into the property. Driving both the designs and the leasing process is Orton’s commitment to keeping the space accessible to all and designated for public use. The Calvin Simmons Theater—which was named for Calvin Eugene Simmons, the second Black conductor of a major orchestra— will be restored to its original architecture. The theater will seat about 1,500 people.

The remainder of the building will change, with the arena repurposed to accommodate nonprofit spaces and coworking offices. On the first floor, restaurant and food services will provide amenities to visitors and tenants, and a deck overlooking the lake will also be added. A community kitchen with breakroom on the second floor, updated lobby and lounge area and a mix of break out rooms, conference space and phone booths will be added. An onsite gym with showers, as well as classroom and rehearsal spaces will also be available. On the west side of the theater, a plaza will connect the auditorium to the adjacent Oakland Museum of California.

Orton and Colliers believe that the building’s high ceilings, wide open spaces and proximity to the auditorium will provide a solid environment for burgeoning non-profits, arts businesses and community-oriented organizations. As leasing ramps up, the development team is specifically targeting those tenants to ensure the Oakland Auditorium’s continued cultural longevity.

“We are feeling good about the sector we’re pitching to, and typically, they do like to collaborate and be together,” Dolby noted. “We think they’re going to like this concept.”

With rents for commercial space continuously on the rise in the Bay Area, however, questions have arisen as to just how nonprofits and arts-based businesses will be able to afford rents in Lake Merritt. Currently, commercial office rents in the Lake Merritt neighborhood are coming in at $4.46 per square foot across all asset classes. For Class A properties, rents are even higher, at 4.99 per square foot full service. Vacancy at the end of the year came in at 10.9 percent, a roughly 3.9 percent increase year-over-year.

The market has largely maintained its momentum in recent months, according to Colliers, because of a number of government and federal entities whose demand for space remains despite economic conditions. A number of companies are also expanding into Oakland from San Francisco. Last year, Credit Karma pre-leased The Key at 12th in a major step in transferring its headquarters to the City.  Colliers added in a recent report that the presence of other major companies, such as PG&E and Kaiser, have also helped to maintain market dynamics in the area.

“Oakland has not been as bad as San Francisco, because we have less square footage,” explained Dolby. “Believe it or not, we have a lot of government—we’ve always had those groups like BART, the City of Oakland and Federal organizations. Those tend to always need space.”

However, in order to accommodate its target tenants, Orton and Colliers are placing rents below market rate. According to Dolby, Colliers and Orton are quoting potential tenants at $3.50 per square foot. For offices in the basement level, rents are even lower, at $2.75 per square foot full service. The rates also include full turnkey buildout, such as PG&E, WiFi and furniture.

As of December of 2019, Orton closed a lease disposition and development agreement with the City of Oakland, along with a 99-year lease. While no leases have yet been formally signed, Dolby said there several tenants interested in leasing space.

“We are pricing [the space] very fairly,” said Dolby. “…It’s a pretty good rate for downtown.”