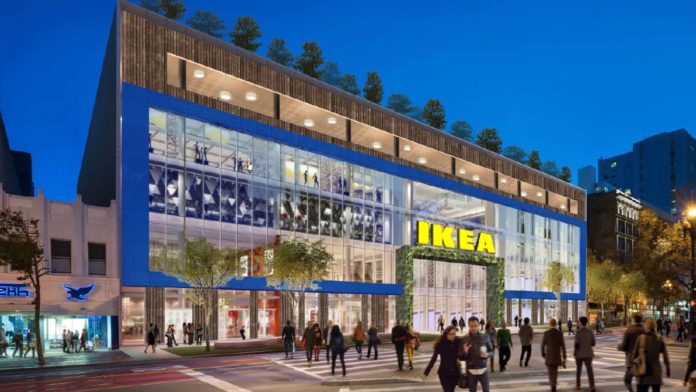 Retail in San Francisco hasn’t died. Swedish furniture retailer IKEA has kicked off construction last month on its latest store as it orients itself to a more urban customer base. The project, located at 945 Market Street, will be located in San Francisco’s South of Market neighborhood. The project comes as San Francisco’s retail scene continues to grapple with the impacts of the coronavirus pandemic.

The project is located at 945 Market Street and is known as the 6×6 building. IKEA acquired the property from Alexandria and TMG Properties in 2020 for about $198 million; the acquisition marked Ingka Centers’ first in the United States and was a “milestone” for the company as it pivoted into a new strategy aimed at meeting changing consumer demands. Now, more than a year after the property traded hands, that vision is becoming a more solid reality.

“Our urban projects are all about getting closer to our customers. 6X6 is an impressive six-floor glass building, with smart modern design and internal areas that provide the ideal canvas to create something truly spectacular,” said Gerard Groener, Ingka Centres’ general manager at the time of the purchase. “We believe Ingka Centres can transform the performance of well-located assets like 6X6 by aligning their offers to how people want to spend their time. We’re so excited about the potential that [the] 6X6 building represents to Ingka Centres and local communities.”

6×6 was originally designed by Gensler, with structural engineering by KPFF. In all, the building totals 375,800 square feet across eight floors. IKEA will utilize 82,840 square feet of space on the basement, first, second and fourth levels, according to plans on file with the City of San Francisco. The remaining square footage will be a mix of retail, office, food and beverage space, as well as entertainment and digital experiences. Upon completion, IKEA expects its total investment to total around $260 million.

The property’s previous owners, Alexandria and TMG, had originally purchased the property in the fall of 2019 for $179 million, or about $677 per square foot, with their own visions for the property. At the time, Alexandria stated that it “was excited to be bringing this important property under local control and look[ing] forward to securing a mixed-use project with a strong retail presence.”

Despite lofty plans for the site, the building has long remained vacant. Originally developed by Cypress Equities, the project was one of the largest retail development projects in the city since the Westfield Mall first opened in 1998. Dallas-based Cypress Equities began construction of the site in 2014 and had hopes of having tenants lined up by the time construction was completed in 2017. However, with few takers in the market, Cypress Equities then planned to convert the retail space into office uses.

Retail in San Francisco remains a mixed bag, according to a recent report by Kidder Mathews. At the end of the year, vacancy was up, even though both unemployment was trending down and rental rates were on the rise. At the end of the year vacancy sat at 5.2 percent, while average asking rents sat at $49.74 per square foot. Absorption during the fourth quarter totaled 91,583 square feet, not quite enough to offset 114,950 square feet of construction deliveries. 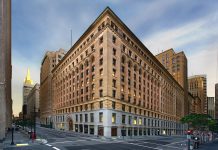