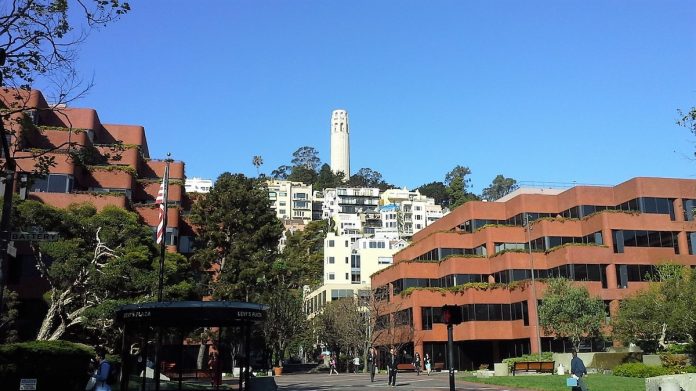 Atlanta-based Jamestown is in the process of buying the 800,000 square foot Levi’s Plaza office asset in San Francisco, according to several sources with knowledge of the deal. The purchase price is approximately $826 million, or around $1,032 per square foot, according to a report by the brokerage firm Newmark Knight Frank. The deal has not closed yet, and Jamestown declined to comment when contacted for this story.

The seller of the property is San Francisco-based Gerson Bakar and Associates. The listing agent on the sales is the San Francisco office of Eastdil Secured, which did not respond to a phone call for this article.

In January of this year, The Registry reported that the building was up for sale and the at the seller at the time was seeking a $700 million pricing.

The Levi’s Plaza asset is located at 1155 Battery Street, and it is situated along the Embarcadero. This property has Levi Strauss as a major tenant in the property, which leases 354,797 square feet in the building, according to a filing with the Securities and Exchange Commission. The lease has a term that runs until the end of 2022. Other tenants in the property include BCCI Construction, Spaces, WideOrbit and Ubiquity Retirement & Savings.

The famed denim designer company is, however, out in the market looking at potential alternative locations to base its headquarters. This uncertainty has left some in the brokerage community to question if Levi Strauss will occupy the building at all in the future.

Levi leaving would present a sizable opportunity for the new ownership. Levi Strauss’ portion of the building would be a re-leasing opportunity to bring in other tenants at a much higher rates. As written in the company’s regulatory filings, the tenant has current rent that comes in at $33 per square foot on an annual basis. This rent practically does not exist in San Francisco for a tenant this size in a space similar to this one, and Jamestown would be able capitalize on Levi’s vacancy.

Jamestown has been a prolific investor around the Bay Area, and in San Francisco in particular, in the past. In August of 2018 the company paid $40 million, or around $996 per square foot, to acquire 660 Market Street, a five-story creative office and retail property on Market Street in San Francisco’s renowned Union Square shopping district and just two blocks from the Transbay Transit Center. Just a month later, it spent $118 million, or just around $196 per square foot, to acquire the 600,000 square foot 2000 and 2001 Clayton Road office building assets in Concord from DivcoWest Properties.

Jamestown was established in 1983 as an investment and management company focused on income-producing real estate in the United States, according to a statement from the company. Over the last 35 years, Jamestown has expanded into a national, vertically integrated real estate operator with over $10.3 billion of assets under management as of June 30, 2018. Jamestown companies have headquarters in Atlanta, GA and Cologne, Germany, and offices in New York, NY, Boston, MA, Washington, DC, San Francisco, CA and Bogota, Colombia.