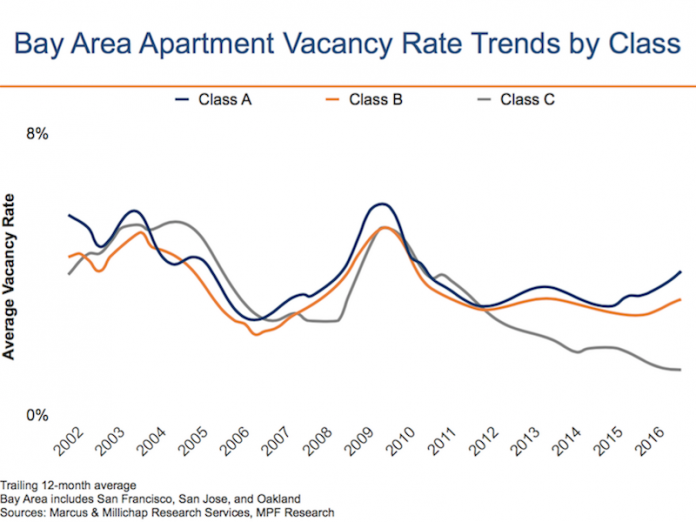 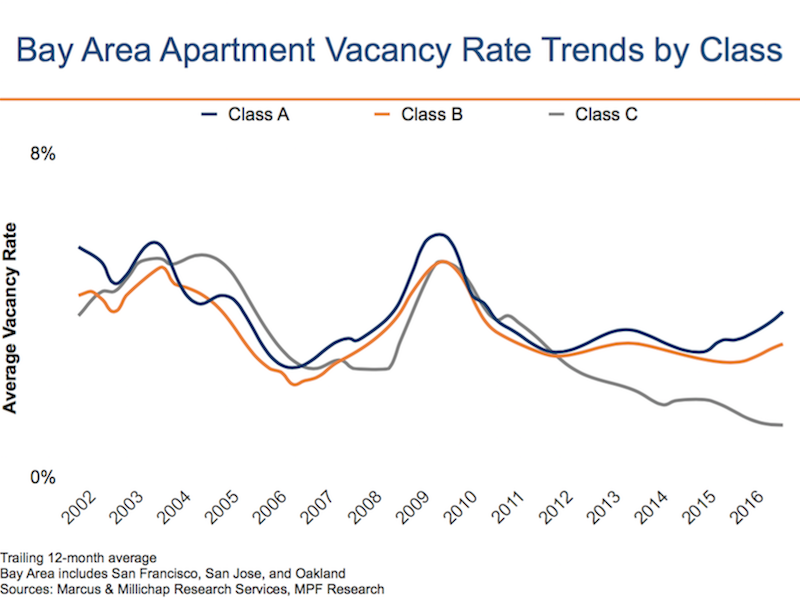 Entering the seventh straight year of growth in the U.S. economy, researchers at Marcus & Millichap offer their clients a promising investment outlook for the nation’s 2017 multifamily housing market. This favorable forecast is tempered by an added qualification that the new political landscape marked by anticipated sweeping shifts in far-reaching economic policy warrants sustained vigilance. In the 2017 U.S. Multifamily Investment Forecast report, researchers point to predictions of an increase in 2 to 2.5 million jobs, jump in consumer spending by 2.5 percent, GDP growth and a rock-bottom average unemployment rate, as key indicators of this economic strength that will sustain apartment growth in many U.S. urban centers, given the widespread low supply of single family homes.

Oakland is the Bay Area’s highest ranking market in the report’s multifamily index, landing at number five on the list of the nation’s major metros, one spot down from last year. Compared to San Francisco and San Jose, Oakland is positioned to have the strongest job growth rate of 3.1 percent. As many migrate from pricier parts of the Bay Area to Oakland’s relative affordability, rents continue to rise, forecasted at a six-percent increase for this year. With 3,000 apartment units set for delivery — the highest annual amount since 2000 — the average vacancy rate will be a low 2.9 percent due to good net absorption.

The Region’s three major cities, San Francisco, San Jose and Oakland are geared to add over 12,000 apartment units this year. In San Francisco, this will increase vacancy rates at least temporarily as supply outpaces demand. The area’s strong market activity is the result of sustained economic growth well above the national average largely due to information technology, social media and biotech industries. With average home prices out of reach for average earners and a dearth of those seeking to sell properties, rental demand remains high.

“An abnormally high number of units are going to be added in the Bay Area this year — the highest on record,” commented Chang. “We don’t normally see this and it’s causing vacancy to rise a bit. We’ve seen some softer rents in the past few months. It’s a lot for the Bay Area, which has limited space to develop, however when you factor in the robust growth and size of the market, it’s not really an overwhelming number. It will just take some time to absorb.”

The report cites conservatism on the part of lenders as an element that will help prevent overbuilding. The Dodd-Frank Act became federal law in 2010 in the aftermath of the Great Recession, and among other provisions it marks construction as a higher risk investment category thereby requiring banks to reduce the outflow of capital to developers. Although the Act could be overturned by the current administration, rolling back of the regulatory effects would be a lengthy process. Presently, some researchers view the existence of Dodd-Frank as a positive in the current climate as a means of controlling the growth cycle.

Economic strength is still evident in many cities around the country especially in metros hosting tech industry epicenters like the Bay Area, Seattle, Los Angeles and Salt Lake City. While there is no evidence of an approaching downturn, Chang stressed that there are numerous policies that could come from Congress or the President, which could either extend the growth cycle or potentially cause it to derail. Policies currently being discussed concerning investment in infrastructure, greater restrictions on immigration and a protectionist trade stance could have a dramatic impact on the course of the economy depending on outcomes.