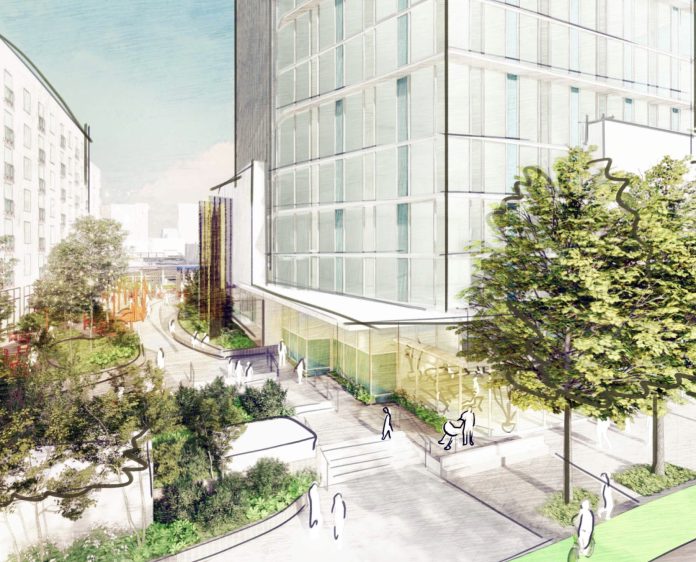 Some changes are coming to Oakland, and in this case, two blocks in the Civic Center neighborhood are looking to deliver a number of much-needed housing options along with a commercial building right atop the Lake Merritt BART station.

A partnership between Oakland-based East Bay Asian Local Development Corporation and San Francisco-based Strada Investment Group is looking to reimagine these two blocks with market rate, affordable and senior housing, while also providing an office building that will fill up nearly half a block. One of the two blocks is located between 9th and 8th Streets and Fallon and Oak Streets, while the other is between 8th and 7th Streets and Oak and Madison Streets. The first block will also be the first phase of this redevelopment, while the second block will be redeveloped in the future.

The properties that the development partnership is looking to bring in the first phase include two housing developments—one is a market-rate housing property and the other is a senior housing building. The second phase is looking to bring affordable housing and office projects to life. Each block is around 1.3 acres in size, and the proposal is looking to demolish all existing structures on the two blocks to allow for the new construction.

Block 1 development will kick off with building B, the senior housing building in late 2023, and it is projected to be completed in mid-2025. Building A, the market-rate housing property, is likely to start in 2024 and conclude in 2026.

Block 2 development will follow the completion of Block 1, and it will commence construction in 2026 at the earliest with the construction of building C, the office project, and building D, the affordable family housing building. Those properties are likely to be completed in 2028, if the development schedule is met.

In all, the development, when completed, is looking to deliver 556 units, over 40 percent of them affordable, a 500,000 square-foot commercial office building and additional community benefits such as large public open space, active ground-floor retail, as well as bicycle, pedestrian and transit infrastructure that will support the access to this site.

The development in the first phase proposes to deliver a separation between the market rate and senior housing buildings in the form of a paseo, which is planned to serve the purpose of a public plaza and gathering place. This may include seating areas with stationary and movable outdoor furniture, play areas and even public art installations.

This paseo is an important aspect of the development, according to the design team. It is located a the end of a three-block open space area, and has significance to the City’s Chinatown community. The paseo will be built over the BART tunnel, so no structures will be constructed over it.

In June of 2021, the development team won $24.4 million Affordable Housing & Sustainable Communities funding for Building B, which is one of the reasons this development will kick off first. This building is the smallest of the four.

Given the significant horizontal improvements that the project is looking to deliver, during the Planning Commission meeting earlier this month, there were some questions about the timing of their delivery. Most of the paseo will likely be developed during the development of building B, but the remainder of the improvements will be added incrementally, as the development reaches completion.

The only additional feedback that the staff recommended to the development team during that meeting was to provide higher quality finishes than what was initially proposed. It also wanted to see a little more consistency in the use of colors and consideration of the massing given the surrounding structures and possible future developments in the area.