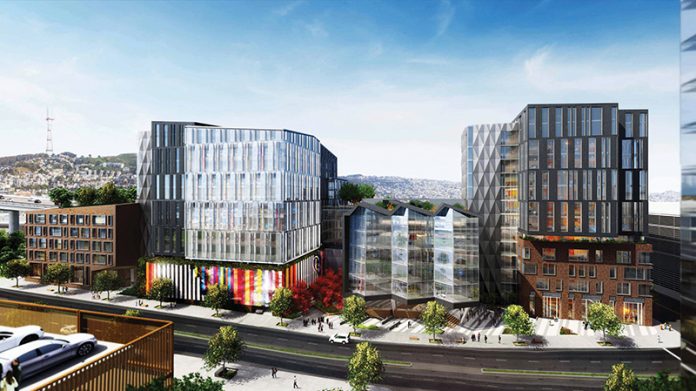 (EDITOR’S NOTE: According to several sources with knowledge of transaction details, the buyer of the asset is KKR.)

Kilroy Realty Corporation (NYSE: KRC) today said it has signed a definitive agreement to sell The Exchange on 16th, the company’s 750,000 square-foot office property located at 1800 Owens Street in San Francisco’s Mission Bay neighborhood, for a purchase price of $1.08 billion or approximately $1,440 per square foot. Brokers have reported this as the highest per-square-foot sales price for a major property in the city’s commercial real estate market. The transaction is currently in escrow and expected to close at the end of March.

“This transaction demonstrates that quality assets in quality locations remain highly attractive to buyers and in this case generated a record price,” said John Kilroy, chairman and chief executive officer of KRC. “The return we achieved from development to disposition clearly highlights the value we have created through our development program. In addition, the strong price underscores the embedded value of our stabilized portfolio, which is well-leased, modern and highly sustainable.”

“This is a resounding sign that people are still excited to be a part of San Francisco and its future. I want to thank Kilroy Realty for their ongoing partnership and collaboration, and recognize them for how they continue to use their development expertise to move forward positive projects that help our economy grow and support the future of our City,” said London Breed, Mayor of the City and County of San Francisco.

KRC commenced development of The Exchange in late 2015 and signed a 15-year lease with Dropbox, Inc. (Nasdaq: DBX) for the entire office component of the property in 2017. At the time, it was the largest single Class A commercial lease transaction ever completed in San Francisco. The total development cost for the project was approximately $585 million or $780 per-square-foot.

The company will use the sale proceeds to fund development, for acquisitions, and for other general corporate purposes, including potentially paying down debt, repurchasing stock or paying a special dividend to the company’s common stockholders.

About Kilroy Realty Corporation. Kilroy Realty Corporation (NYSE: KRC, the “company”, “KRC”) is a leading West Coast landlord and developer, with a major presence in San Diego, Greater Los Angeles, the San Francisco Bay Area, and the Pacific Northwest. The company has earned global recognition for sustainability, building operations, innovation and design. As pioneers and innovators in the creation of a more sustainable real estate industry, the company’s approach to modern business environments helps drive creativity, productivity and employee retention for some of the world’s leading technology, entertainment, life science and business services companies.

KRC is a publicly traded real estate investment trust (“REIT”) and member of the S&P MidCap 400 Index with more than seven decades of experience developing, acquiring and managing office and mixed-use projects.

A Leader in Sustainability and Commitment to Corporate Social Responsibility

KRC is listed on the Dow Jones Sustainability World Index and has been recognized by industry organizations around the world. KRC’s stabilized portfolio was 68% LEED certified and 39% Fitwel certified, the highest of any non-government organization, as of December 31, 2020.

The company has been recognized by GRESB, the Global Real Estate Sustainability Benchmark, as the listed sustainability leader in the Americas for six of the last seven years. Other honors have included the National Association of Real Estate Investment Trust’s (NAREIT) Leader in the Light award for six consecutive years and ENERGY STAR Partner of the Year for seven years as well as ENERGY STAR’s highest honor of Sustained Excellence, for the past five years.

A big part of the company’s foundation is its commitment to enhancing employee growth, satisfaction and wellness while maintaining a diverse and thriving culture. For the second year in a row, the company has been named to Bloomberg’s Gender Equality Index—recognizing companies committed to supporting gender equality through policy development, representation, and transparency.

More information is available at http://www.kilroyrealty.com.