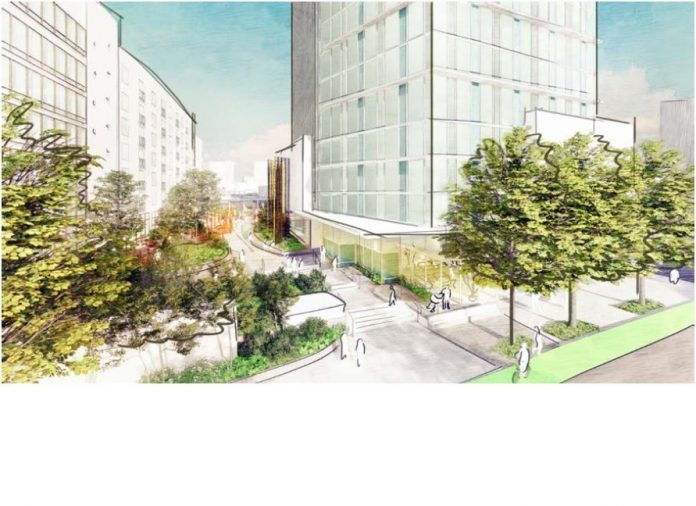 A two-block transit-oriented development in Oakland has cleared an initial round of approvals as its project team works to create a responsible, community-oriented and culturally-sensitive development. At a recent meeting, the Oakland Planning Commission voted to support Strada Investment Group and East Bay Asian Local Development Corporation’s (EBALDC) initial plans to construct hundreds of residential units and an office tower near the Lake Merritt BART Station.

”We are just so excited to be here today to present to the Planning Commission this landmark, multi-phased project which has been multiple generations in the making,” said Ener Chiu, associate director of real estate for EBALDC. “Our program is the result of the synthesis of a progressive TOD and affordability policy that was initiated and adopted by BART and more than 13 years of intensive, community advocacy and organizing.”

The project site is located at 51 9th Street and 107 8th Street, and is owned by BART. Plans will include 557 units–233 of which will be affordable–and up to 500,000 square feet of office space. 16,500 square feet of ground floor retail and food services, a 2,000 square foot commercial kitchen and 6,200 square foot day care are also part of Strada and EBALDC’s plans. Documents indicate that a public paseo and BART plaza as well as 408 parking spaces, will be included, as well.

Oakland-based PYATOK and Solomon Cordwell Buenz Architects are responsible for the design of the project. While the overall designs are still preliminary, Chiu noted that the development will be driven by efforts to strengthen a community heavily impacted by eminent domain and the dividing of its neighborhood due to public development.

“Oakland Chinatown has always been a multigenerational neighborhood for families,” emphasized Chiu. “…The construction of BART, which is perhaps one of the most unifying pieces of public infrastructure in our region, nevertheless came at a heavy price for our neighborhood, the scars of which you can still see today.”

With the project, STRADA and EBALDC are focusing heavily on a development that will facilitate a community that is safer for pedestrians, supports modern and maintained community facilities and open spaces, creates neighborhood-focused buildings and encourages the creation of jobs for limited English speakers. When the planning process first began, Strada and EBALDC were adamant that at least 30 percent of residential units also catered to households below 60 percent of the area median income (AMI), and that units supported families. Most importantly, however, the developers are working to create a project that honors and strengthens the cultural legacy of the site and Oakland Chinatown.

In the subsequent months, the development team will work on finalizing the designs of the project beyond programming and will return to the City and the community for feedback on its proposed architecture.

The most recent iteration of the project has been in the works since the Spring of 2018, when BART released a request for qualifications for a transit-oriented development for two blocks at the Lake Merritt BART Station. After selecting the Strada/EBALDC development team, the pair of firms submitted a pre-application in March 2019 for development. Environmental review was later initiated in February 2020 with Strada and EBALDC completing their application process at the end of 2020. After the development team finished presenting their plans, the Planning Commission saw the merits of the development and voted to move the project forward. Final approvals for the project are expected by the end of the year.