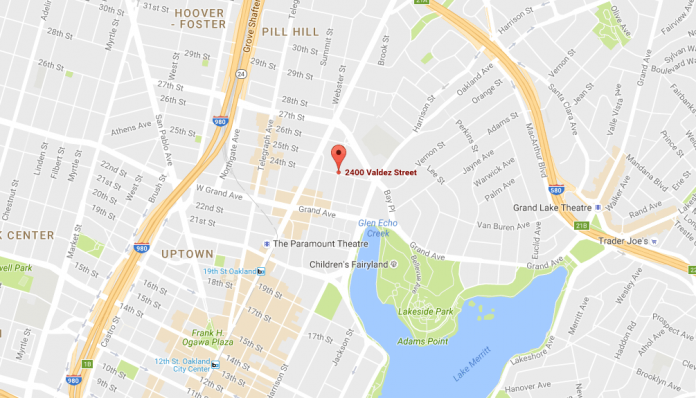 A 1.1-acre parcel approved for 224 apartments and 23,465 square feet of ground floor retail at 2400 Valdez Street in the Valdez Triangle District of Oakland is in contract to close for $10.7 million. The buyer is Houston-based Hanover Co., which bought it from the Masri & Smith families.

[contextly_sidebar id=”yiGLUW2YvRpHoNsVwCSAN4trJiDcLhqa”]The project received approval from the Oakland City Council on April 20, 2016 amid environmental protests in a 6-0-1 approval vote. At the time, both Hanover, then in the role of the developer, and the Masri & Smith families presented a vision for the development that Oakland officials found to be exceptional.

“What we present this evening is not only Hanover’s vision, but the city’s vision as well,” development partner Scott Youdall told the commission at the time, crediting the standards and uses required by the two-year-old Broadway Valdez District Specific Plan. “It’s a current parking lot, not a very pedestrian-friendly experience…We expect the retail will generate $1.2 million in annual sales tax revenue.”

“I think the design of the project is great,” said Design Review Committee Chairman Jim Moore, calling the changes exciting. “The way the different surfaces interact is very well articulated.”

Some members of the public at the time of the project approval expressed concern that the project was inconsistent with the Specific Plan and violated CEQA (California Environmental Quality Act).

Responding to allegations of soil contaminant hazards by the speakers, planning staff Pete Vollmann cited other parcels in the neighborhood and told the commission, “In comparison to other sites, this one is fairly clean.”

Sam Greason of Bella Vista Land Advisors worked on behalf of the sellers on the transaction.

In an area formerly identified as Auto Row, in July 2014 the Oakland Planning Department approved the Broadway-Valdez Specific Plan with the goal of creating a vibrant, around-the-clock, urban destination where people can shop, play, live and work. The Plan put a special focus in the Valdez Triangle on establishing the area as a retail destination for primarily mid- to upper-end fashion, home and recreation shopping. The Plan accommodates up to 1,120,000 square feet of additional retail, 1,800 new housing units, 4,100 new jobs, 700,000 square feet of office uses and a new 180-room hotel.