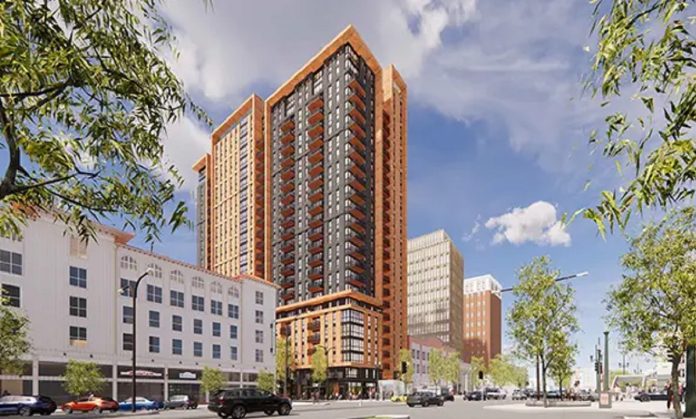 A real estate development firm that is planning to construct a 326-unit apartment building in Berkeley has purchased the project’s property site, according to a report from The Mercury News. Landmark Properties purchased the site – which is currently developed with a 43,643 square foot mixed-use retail and residential building – at 2190 Shattuck Ave. for $27.7 million, or approximately $634 per square foot. The seller was an entity affiliated with PGIM Real Estate, an affiliate of Prudential Financial.

Landmark Properties previously announced its intention to redevelop the site at 2190 Shattuck Ave. into an apartment building, which would be the firm’s third project in Berkeley, according to The Registry’s previous reporting. The project would feature units ranging from studio to five-bedrooms with approximately 10 percent of available units designated as affordable housing. Amenities are slated to include quartz countertops, stainless-steel appliances and hardwood floors. Every residence would be fully furnished and come with technology-related amenities in the common area as well as high-speed internet and cable.

Community amenities would also feature a 7,000 square foot rooftop deck with a dog park, hot tub and lounge area. Additionally, residents would be able to access 24-hour study lounges, a fitness center and computer lab. For residents with vehicles, reserved parking will be offered for an additional fee. The development would also include 7,500 square feet of ground-floor retail space.

This proposal is one of several planned in Berkeley. Another project is NX Ventures’ plans to build the tallest-ever apartment in the city at 1998 Shattuck Ave., according to previous reporting by The Registry. The proposed 28-story development would have 599 apartments, with 396,030 square feet out of the total planned 412,400 square feet dedicated to housing.