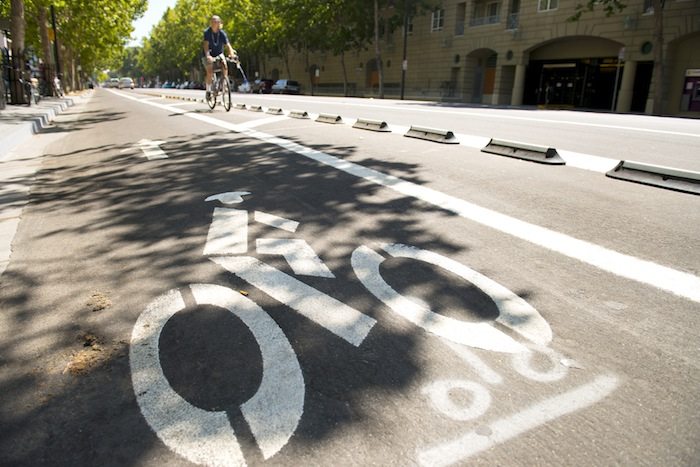 [dropcap]B[/dropcap]ike lanes, bike trails and bike bridges are proliferating across the Bay Area, manifesting the region’s burgeoning bike culture. The high-minded might attribute the shift to a desire to live more sustainably. The pragmatic know the trusty bicycle is also a good way to avoid the region’s horrific traffic and to steal a few moments enjoying the temperate climate.

Next year, a $4.3 million grant from the Metropolitan Transportation Commission will help finance the Bay Area’s first-ever bike-sharing program with hubs along the Caltrain line from San Francisco to San Jose. With an expected fleet of 1,000 bikes and 150 bike-share locations, the system creates new connections to high-activity areas such as universities, shopping and major employment within a three–mile radius of Caltrain stations.

[pullquote_right]“We’ve talked to real estate agents who say bike parking is regularly in the top three requests they hear from employers looking for larger space in San Francisco—especially South of Market and Downtown,” Leah Shahum, executive director of the San Francisco Bicycle Coalition.[/pullquote_right]San Jose now has 260 miles of complete and open bikeways. City council has directed a 500-mile network be in place by 2020, said John Brazil, head of the city’s Bicyclist & Pedestrian Program.

In San Francisco, people accomplish as many as 3.5 percent of all daily trips on bikes, according to a recent city survey. “In the last five years, there’s been an increase of 71 percent in the number of bike trips” in San Francisco, said Leah Shahum, executive director of the San Francisco Bicycle Coalition, citing city-compiled statistics. “We think it has something to do with the increased number of great bike lanes on the streets.”

In just the past two years San Francisco has added nearly 25 miles of bikeways—dedicated lanes for bikes. “We know there’s a real correlation to people riding when they feel safe and comfortable on the streets,” Shahum said.

The city of San Jose hopes to pump up its populations’ daily bike-trip count to 5 percent of the total in the next eight years from 1.2 percent today. Under its recently approved master land-use plan for the next nearly 30 years, the policies are crafted to push the bicycle’s share of daily trips to 15 percent, said Silicon Valley Bicycle Coalition Deputy Director Colin Heyne. By then, San Jose’s population could be 1.5 million, so if planners are on target, as many as 225,000 people a day could be traveling on bikes by mid-century.

While proximity to transit stations, especially in the Caltrain corridor, remains the latest killer app when it comes to leasing office and research space, good bicycle access is coming on quietly in some locations. “California is a place to enjoy the outdoors and [biking] is a way to enjoy the outdoors every day without having to make time in your schedule: It is part of your schedule,” said Jack Newman, co-founder and chief scientific officer of Emeryville-based renewable products company Amyris Inc.

Amyris is one of the largest tenants at EmeryStation, a 12-building, 2.5 million square-foot research campus in Emeryville and West Berkeley filled with biotech and life science firms and nonprofits. From a third to a half of Amyris’ employees bike to work, either partially or entirely, Newman said. He has ridden his bike to work from Berkeley for a decade.

“It’s a half hour’s worth of exercise every morning,” Newman said. “It just makes you feel like you’re doing something in the right direction for the planet.”

In March, following the lead of the bicycle coalition and the San Francisco Building Owners and Managers Association, the San Francisco Board of Supervisors approved a first-in-the-nation ordinance that requires landlords to provide bicycle parking for tenants’ employees if they ask for it. “We’ve talked to real estate agents who say bike parking is regularly in the top three requests they hear from employers looking for larger space in San Francisco—especially South of Market and Downtown,” said Shahum.

Many younger employees—those aged 25 to 45—use mass transit to cover the bulk of a commute and then bike the last mile or so to work, said Geoff Sears, a partner at San Rafael’s Wareham Development Corp. Wareham owns EmeryStation, which is near the Emeryville Amtrak stop. “We’re sort of shocked that we keep adding bike racks,” he said of the buildings his company has developed and managed. “They get filled, and we add more and more. It’s astounding.”

EmeryStation also is on the Emeryville Greenway, a former railroad right of way that has been remade into a pedestrian and bicycle parkway slashing diagonally through the city of Emeryville and linking Berkeley’s bikeways to Oakland’s.

Besides bike racks and storage, tenants want showers and places to change into business attire. Even the capacity of elevators can be an issue as some want to take bikes to cubicles. “Some people have expensive bikes, and even if it’s secured, they don’t really want to leave them in a bike rack,” Sears said.

Gregory Davies, a broker at Cassidy Turley in San Jose, says while there is a definite relationship between availability of mass transit and commercial space, he hasn’t seen any clamoring for bike-friendly space in San Jose. “The San Jose region is so spread out, it is more of an amenity than it is necessarily a correlating factor in rent.”

But David Hiebert, managing partner at the Cassidy Turley office in more tightly packed Palo Alto, does see some demand for bike-friendly locations. “What separates one building over other buildings is the amenities and part of that amenities package is certainly the showers. Bike lockers have become a popular little add-on. The bigger question we always get is how much does proximity to Caltrain affect value, and that’s quite a bit,” he said, “and certainly biking is a component of that.”

John Yandle, senior vice president and manager of Cornish & Carey Commercial based in Santa Clara, sees some interest from bicycling tenants, but not yet enough to make or break a sale. He sees the potential for more bike-friendly commercial space because of the region’s concerns over personal health, the environment and traffic. But he doesn’t see tenants hammering on landlords’ doors demanding bicycling-related amenities—yet.

In the first six months of this year the Mineta Institute of Transportation at San Jose State University has produced five research reports on biking, seeing the upswing in local bicycle use and commuting and anticipating interest from public policy makers in engendering even more, said Donna Maurillo, the institute’s special projects director.

One Mineta research paper, the principal author of which was Asbjorn Osland, points to Portland, Ore., as a model for bicycle use. Portland has seen cycling counts triple since 2000, with about 6 percent of residents using bicycles to commute to work. “Some neighborhoods boast bike commuter rates as high as 9 percent,” the report says. “Between 1991 and 2008, trips on bike-friendly bridges have increased 410 percent while automobile counts have remained stable.”

Portland, with 594,000 residents as of July 2011, has built 260 miles of bike lanes, a more than four-fold increase since the 1990s, the report says. While biking to work and on short trips pales in numbers compared to cars even in Portland, participation comes from a cross-section of the population, said Jonathan Maus, a journalist who publishes a daily online bicycle news report there.

“If you stood on a corner and watched people bike into Portland, you’d quickly find that these aren’t people who are passionate about bicycling or cycling enthusiasts. These are regular people—old, young, everything in between—who have realized that it makes more sense for their pocketbooks, for their bodies, for their Earth, for efficiency, to use a bike,” Maus said. “It’s just a practical decision.”

A key to it, he says, is keeping bike trips fairly short, usually no more than four miles.

The proposed multi-million dollar bicycle-sharing program that would see 1,000 bicycles at the ready for eager riders from San Francisco to San Jose was supposed to roll out in October but was pushed back to next year. The program is aimed at someone who has ridden mass transit and then would rent a bike to complete the trip. But as of late August, negotiations with the would-be bike vendor were still underway, said Brandi Childress, public information officer for the Santa Clara Valley Transportation Authority.

The plan calls for bicycles and bike docks at Caltrain stations and bike-share pod stations placed within a three-mile radius at high activity locations such as downtowns, universities, shopping centers, city halls, high-density housing and major employment centers. Everything is computerized, so the operator knows what bikes are where. “Right now we are looking at providing the first 30 minutes for free,” Childress said.

Participating agencies spent the summer identifying places to install the destination bike pods and kiosks, though locations remain in flux. In San Francisco approximately 50 bike-share stations and 500 bikes are to be allocated to the downtown core. Additional bikes and stations are to be scattered at Caltrain stops and downtown areas in Redwood City, Palo Alto, Mountain View and San Jose with approximately 100 bike-share stations and 500 bikes.

The Bay Area follows East Coast cities such as Boston and Washington, D.C., into bike sharing. New York City is expected to start its program in March. New York wants to capture a big chunk of the estimated 54 percent of all daily trips in the city that are two miles or less.

While prices for the Bay Area’s bike sharing are still being worked out, New Yorkers will be asked to ante up $9.95 to get a bike for 24 hours, the minimum rental. Do it enough and the annual membership of $95 would seem a bargain. The bike-sharing program in Washington, D.C., is less expensive with $7 getting a bike for 24 hours and a $75 annual fee. In Canada, BixiMontreal, a system with more than 5,000 bicycles and 411 rental stations, prices its services between Washington’s and New York’s. Even Chattanooga, Tenn., has a program with 300 bikes on the streets.

“I do it for health, I do it as a stress relief, I do it because it’s time efficient,” said Carl Guardino, the chief executive of the Silicon Valley Leadership Group, during a phone interview while he was riding his bike from office to home one afternoon in late August—a 16-mile trip. He pointed out that he doesn’t make calls but does take them using a hands-free device.

Guardino has been bike commuting for about six years and says the bike ride is about an hour each way, compared to using a car, which normally would take him 35 minutes to 45 minutes. Bike commuting keeps him in shape and also bolsters his feelings abut climate change and reducing his carbon footprint. But how does showing up at a Silicon Valley meeting, if not in Spandex at least in less than a suit and tie impact his work? “I think it’s more and more accepted,” he said.

“The other reason it works well in Silicon Valley is because this is a meritocracy, and if you walk into any company, nobody cares how you’re dressed. Maybe on the East Coast, where they’re much more formal in their attire it would be different. We’re judged on the basis of our ideas more than our wardrobes.”