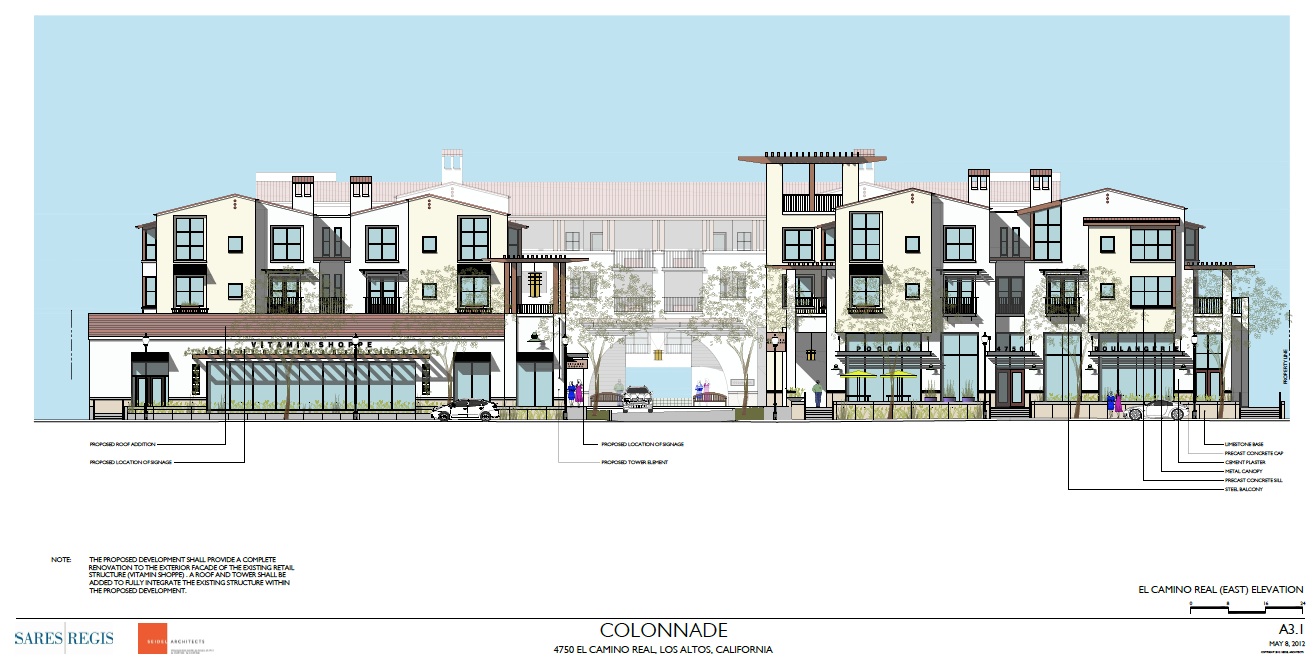 Sares Regis Group of Northern California LLC and Lennar Homes of California Inc. have secured permission from the city of Los Altos to build 205 townhomes and luxury apartments at a rapidly redeveloping corner near the Mountain View and Palo Alto city lines.

The project at 4750 El Camino Real includes more than 17,000 square feet of retail and two levels of below-grade parking. It has 167 luxury apartments, including a 2,000-square-foot rooftop deck, and 38 for-sale townhomes.

Sares Regis plans to begin demolition of existing buildings on the site this year and to initiate new construction early next year. It plans to deliver the complex in late 2014 or early 2015.

Calls to Doug Rich, the Lennar Homes representative cited in public records on the project, were not returned.

The townhomes were expected to sell for an average of $800,000 a unit, according to an economic analysis prepared for the city on behalf of the developers last year. Apartment rents were expected to stabilize at an average of $2.95 a square foot. Including the value of the townhomes, the apartments and the retail space, the project’s total anticipated assessed value is an estimated $103 million, the report concluded.

Sares Regis is partnering with Chicago’s Pritzker Realty Group LLC on the equity portion of the financing for its apartment project, said Jeff Smith, a Sares Regis vice president. It is the first Northern California project where Sares Regis has partnered with the Pritzker company, and the developer’s hope is that it will not be the last. The developer expects to have debt financing in place in the next 30 days, Smith said: “We think the whole area is transforming.”

The project sits immediately across El Camino from the Village at San Antonio Center, a massive remake of an aging retail cluster into a mixed-use housing and shopping center, and a 140,000-square-foot office building that traded earlier this year to Boston-based real estate investment trust Boston Properties Inc. It also is next door to a Whole Foods market that was put up for sale this spring.

The entire area is a short walk from the San Antonio Caltrain station. That station also serves a former 500,000 square-foot Hewlett-Packard Co. campus commonly known as the Mayfield Mall site, which was acquired by Rockwood Capital Group and a local partner in May. The two plan to renovate and lease the campus to a corporate user.

“In that part of Los Altos, the city wants people to be able to walk through our landscaped grounds and to go to the Whole Foods or across the street to the new development,” Smith said.

The Village at San Antonio Center is a two-phase, not quite 21-acre redevelopment of an aging suburban retail center into a mixed-use cluster of housing and shops. The first phase of the development is under construction, including a 65,000-square-foot Safeway and 350 apartments slated to be complete next year.

The Sares Regis development will displace an existing Marie Callender’s Restaurant & Bakery and a garden-supply store. A third retailer, the Vitamin Shoppe, will remain in an existing 5,000-square-foot building that will be renovated as part of the project.

Mountain View is the epicenter of an apartment construction boom, with close to 2,000 units under development or proposed, according to public records. San Mateo’s Prometheus Real Estate Group Inc., the largest private owner of multifamily properties in the Bay Area, has five Mountain View projects on its own. Jon Moss, an executive vice president and partner with Prometheus, said that despite the pipeline, the company is not afraid of overbuilding in Google Inc.’s hometown or in the other submarkets where it is doing business.

“We have been in Silicon Valley a long time and have a lot of confidence in the market, specifically now,” Moss said. “We expect job growth now and in the long term.”

That job creation plus ultra-low interest and capitalization rates, not to mention still manageable construction costs, make now a good time to develop, he said. Over the longer haul, the company believes continued supply constraints caused by geography and growth-sensitive towns will keep the lid on over-development compared to job growth.

That said the company is watching apartment production in North San Jose, where the city has more than 2,000 units under development in a relatively constrained geography. While Prometheus is not among the North San Jose developers, it is watching for spillover effects in proximate areas. “We haven’t experienced those number of units, so it’s hard to know what to expect,” Moss said. “I don’t think it’s something that the city of San Jose should not be doing. It is healthy for the rental market to keep a lid on rental rates.”

Besides Mountain View, Prometheus is building in Santa Clara, Sunnyvale and Cupertino, based on the job creation that has occurred in those submarkets and the expectation that it will continue. The company typically builds and holds its projects. It owns 12,000 units, mostly in Silicon Valley, and manages 6,000 more.