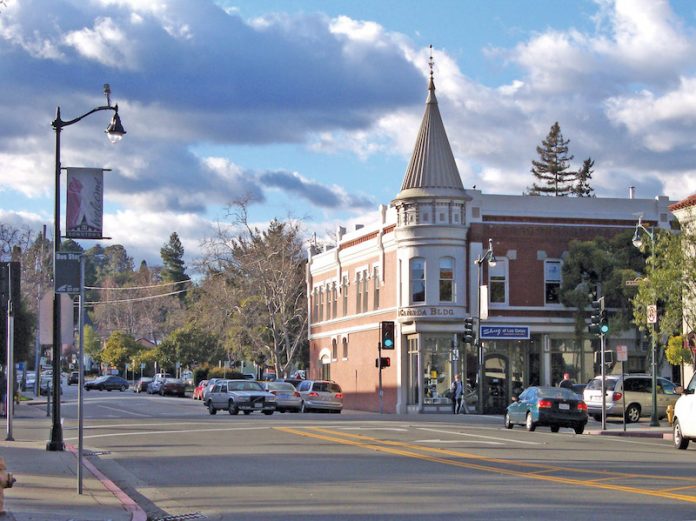 After two decades of on-again, off-again planning, Los Gatos officials are nearing approval of a “town within a town” touted to both stem retail leakage and bolster housing supply and diversity in the pricey city.

The 44-acre “North 40″ site—now largely occupied by a walnut orchard tucked into the southeast quadrant of the intersection of Highways 85 and 17 and bordered by Los Gatos Boulevard on the east—may soon be sprouting 364 multifamily housing units, up to 435,000 square feet of commercial and retail space and open space featuring walking and bicycle trails as part of a two-phase development plan. It is a rare open parcel in the largely built-out flatland portion of the city.

[contextly_sidebar id=”K0l2RmP7Hd70O1EhHMpfIydzEsIaWsxS”]The five-member Town Council, likely to continue discussion of the plan June 2, are considering reductions in the commercial space to lessen the traffic impact. That could include limiting or eliminating medical offices. Over the years, in its various incarnations, the project has been controversial with some residents, mainly due to traffic and school overcrowding concerns.

It is the largest development project being considered in town, even bigger than plans to build four new buildings encompassing 470,000 square feet and a new parking structure at the corporate headquarters of Internet television company Netflix, Inc. at 100 Winchester Circle. The next-largest plan for new housing is at 375 Knowles Ave., where 31 to 33 single-family homes are expected to be built by Scottsdale, Ariz.-based Taylor Morrison Home Corp.

A short distance away at the mostly undeveloped North 40 site, previous development plans have foundered. A 1999 specific plan proposal to build a version of San Jose’s tony Santana Row retail-and-residential project never got off the ground. Officials in the wealthy Silicon Valley enclave of 30,000 rekindled the specific plan process to develop the parcel in 2011, according to Laurel Prevetti, the assistant town manager and community development director of Los Gatos.

A draft specific plan already adopted “envisions a vibrant mixed-use community,” Prevetti said, which, while not as large and densely developed as Santana Row, is expected to be anchored by a specialty grocery store, an “artisan market hall” of food-oriented shops and a mix of restaurants, cafes and service-oriented businesses. A general merchandise retailer also would be welcome, Prevetti said, to help shrink the $80 million in retail “leakage” the town suffers annually.

“To buy a pair of socks, people have to go to Target in San Jose,” she said, but added that town officials aren’t seeking a big-box retailer as a tenant.

Prevetti said retail leasing for the project would focus on complementing, not competing with, tenants in the town’s thriving downtown central business district along Santa Cruz Avenue, three miles away.

Lead developer on the project is London-based Grosvenor Americas, which in 2009 purchased 39 acres from walnut farmer Tom Yuki, whose family owned the property since the 1940s. Grosvenor is working in cooperation with SummerHill Homes, a San Ramon-based upscale home developer, and Eden Housing Inc., a nonprofit builder of affordable housing based in Hayward, on the first phase of the project. The East Bay housing developers propose a mix of market-rate and affordable town homes and apartments focused on two groups typically priced out of Los Gatos—millennials starting their careers and low-income seniors. The town requires 20 percent of new housing projects to contain affordable units. Developers say these are demographic groups that typically don’t generate lots of school-aged children.

“Our vision is to provide a spectrum of housing types for these book-end demographics,” said Don Capobres, Grosvenor’s senior vice president of development. He said open land available for development in western Silicon Valley like North 40 is rare.

“We’re especially excited about this project,” Osgood said. “It’s not often we get to create new development on this scale and level of thoughtfulness. Overall, the housing component is wonderful. There is a huge need in Silicon Valley for housing for millennials and low-income seniors. They have a tough time finding affordable, high-quality housing.”

Osgood said the site’s retail component is an attractive amenity for seniors, who would be able to walk to stores and cafes. Exactly what shape those retail outlets will take is still unknown. Grosvenor’s Capobres said some downtown landlords prefer North 40 to have only big-box stores to distinguish it from the mix of small local and national retailers along Santa Cruz and University avenues. He agrees with town officials who now would like to see a “hybrid of neighborhood-serving retail combined with mid-box retailers.”

“We believe in the town’s current vision and would add an agrarian touch to it by anchoring the neighborhood-serving portion with an artisan market hall and featuring a demonstration community garden where restaurants could grow their own produce,” Capobres said. “We believe that meets the Town Council’s requirement that it ‘looks and feels like Los Gatos.’”

James Chung, executive managing director in the San Jose office of Burlingame-based DTZ Retail—Terranomics, said the retail component of North 40 has “all the demographic and geographic fundamentals to be a big hit.” He cited its proximity to the large daytime population of Netflix employees, as well as affluent local residents. Chung said it is unlikely to compete with downtown Los Gatos, with its smaller retailers and high volume of foot traffic. A development similar to the new 320,000-square-foot Village Oaks shopping center in south San Jose—anchored by Target, Safeway, Petco and Marshalls—could be a good fit for North 40, he added.

“With that much retail space, it’s inevitable you will have a big-box retailer there,” said Chung, naming Target as the likeliest general merchandise anchor tenant.