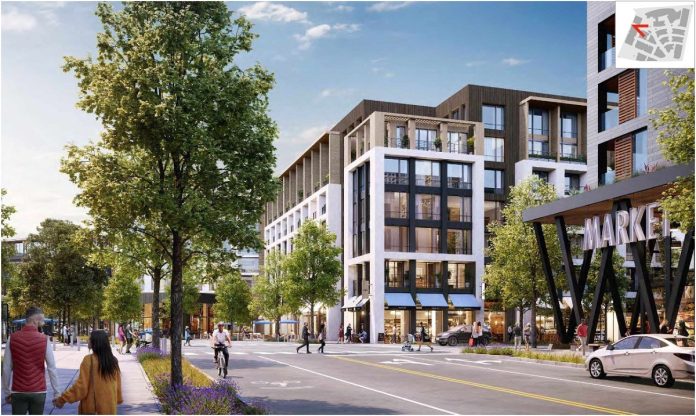 A proposal for a 1.6 million square foot campus that has been years in the making won approval from Menlo Park City Council during a meeting on Tuesday. Among the items related to the project that were approved by the city were certifying the Final Environmental Impact Report, amending the city’s zoning map and adopting the development agreement between the city and the project applicant.

“Congratulations, thank you to everyone and all their hard work,” Menlo Park Mayor Betsy Nash said after the vote. “It has been an amazing two years.”

The Willow Village project is located at 1350, 1399 and 1401 Willow Road and would consist of office, retail and residential space along with community amenities like a town square, dog park and other public open space. The project developer is a joint venture between Signature Development Group and Peninsula Innovation Partners, LLC, on behalf of Meta Platforms, Inc.

The Menlo Park Planning Commission discussed the project during two meetings that took place in late October and early November, according to previous reporting from The Registry, and ultimately voted to recommend approval to the city council. At a Nov. 15 city council meeting, public comments were heard about the Willow Village project, and speakers were generally positive about the proposal, though some concerns were shared about the disruptions to the environment caused by the construction, the lack of affordable housing and the need for accessible public spaces.

The proposal for Willow Village has been years in the making and has gone through several periods of design reviews, revisions and discussions. The project at this point includes up to 1.25 million square feet of office space, up to 1,730 multifamily units – including 312 below market rate units, of which 119 would be age-restricted for senior housing – up to a 193-room hotel and associated retail/dining and up to 200,000 square feet of retail/non-office commercial uses, including a grocery store, pharmacy services, entertainment and restaurant uses, according to project information.

Publicly accessible open space would include an approximately 3.5-acre park, 1.5-acre town square, a dog park and a two-acre elevated linear park, which would extend over Willow Road providing access at the Hamilton Avenue Parcel North. The greater master plan focuses on redevelopment of the former Menlo Science and Technology Park at 1350-1390 Willow Road, 925-1098 Hamilton Ave. and 1005-1275 Hamilton Court.

During the Tuesday meeting, Nash outlined concerns related to both housing and traffic related to the project. Specifically regarding housing, she wasn’t pleased with the amount of housing proposed compared to the amount of office space and noted that while the planned 1,730 residential units should be applauded, it wouldn’t be enough to offset the number of workers that the project’s office and retail space would bring in. However, she also shared her belief that Willow Village would be a benefit for both the local community and wider region.

“I believe Willow Village is a huge, beautiful, climate-sensitive development that reflects years of hard work and it’s geared toward walking and biking and brings important community benefits to the Bay Front area and to Menlo Park generally,” Nash said.