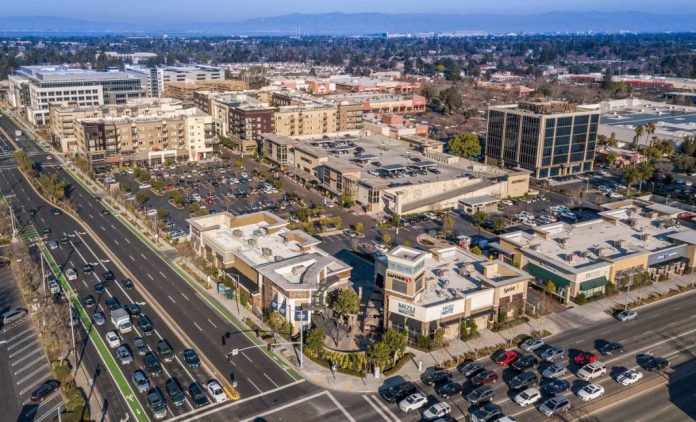 A San Francisco-based investment and development firm has continued to dispose of a key retail asset in Mountain View. According to The Mercury News, Merlone Geier has sold off another part of The Village at San Antonio Center for $77 million. The buyer was TA Realty.

Located at 645 San Antonio Road, the parcels acquired by TA Realty include several stores. A 65,000 square foot Safeway, Mizu Sushi Bar & Grill, T-Mobile, Jared and The Counter all occupy the site. The Safeway, according to Merlone Geier’s website, anchors the retail portion of the 15.1-acre shopping center.

The deal follows Brookfield’s purchase of another portion of the asset this past spring. In that deal, Brookfield paid $630 million for two parcels that include two office buildings, the Showplace ICON movie theater, and a parking garage with 1,229 spaces. The two office buildings—located at 391 San Antonio Road and 401 San Antonio Road—are 100 percent leased to WeWork, who has since sublet the space to Facebook. In total, the offices have 457,000 square feet of space.

Merlone Geier initially acquired the first parcel within the development  site in early 2010, and over the following years assembled acquired more than 20 acres to build out The Village at San Antonio Center. The first phase of the project–completed in 2013–included a 91,000 square foot retail center, as well as 330 mixed-use apartments and 43,000 square feet of “specialty” retail. A second phase, completed in 2019, included office space–nearly 440,000 square feet, the movie theater acquired by Brookfield and a Hyatt Centric Hotel. Another 91,000 square feet of retail was also added.

Now, Merlone Geier is pursuing Phase Three of the development. The building, to be designed by Gensler, sits at the corner of San Antonio Road and California Street. The mixed-use building is expected to total 182,000 square feet, according to public plans. 15,000 square feet of ground floor retail is planned, and the upper four levels will include 167,000 square feet of office space. The current Milk Pail Market, which is now closed, will be demolished to make way for the building.