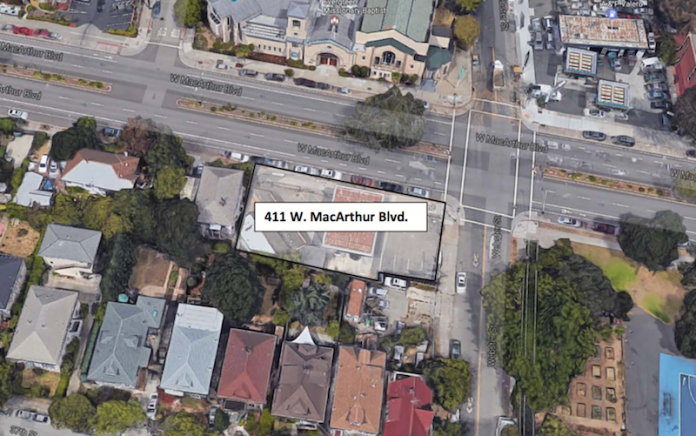 The Hernon Group Inc. has proposed to transform a car wash business at 411 West MacArthur Boulevard in Oakland’s Temescal neighborhood into a mixed-use residential project featuring large units. The parcel is less than 8,000 square feet and carries a General Plan designation of Neighborhood Center Mixed-Use and is zoned Neighborhood Commercial. Historically the site was used for a series of gas stations before converting to a car wash and auto detailing operation along with a surface parking lot and garage. Current structures at the corner of West MacArthur and Webster Street would be demolished to construct a five-story, 31,290 square foot building. Sternberg Benjamin Architects has been working on the design.

“This project is going through CEQA review and a 17-day public review notice period,” stated Maurice Brenyah-Addow, planning project manager. “The deadline is June 5 for the public to comment. It will be staff level review and approval and doesn’t require Planning Commission review. We have received mostly positive comments from neighbors who feel it will be a good project. The site is an old gas station so this will clean it up and bring vitality to the area.”

The proposed five-story building will reach the zoning height maximum of 60 feet and include 2,540 square feet of ground floor retail, which may be used for a restaurant with an entrance on the corner of MacArthur Boulevard and Webster Street. The adjoining sidewalk will be made to accommodate outdoor seating for patrons and feature new street trees along the building frontage. Floors two through five will offer 20 housing units and 2,284 square feet of open space. The open space includes a roof deck featuring BBQ area, a fire pit, gathering areas and windscreen.

The units will be a mixture of sizable one, two and three-bedrooms with a variety of floor plans. The one-bedrooms units are equipped with a den and bathroom and offer 840 square feet of space. The two-bedrooms feature two baths totaling 1,135 square feet. The 1,250 square foot three-bedrooms units also have two baths. A MacArthur Boulevard parking garage entrance leads to 20 spaces utilizing a puzzle mechanical stacking parking system. Nine bike stalls are also available. The building’s design incorporates bronze anodized aluminum for the retail entrance with a bronze metal canopy above. The residential levels are marked by metal panels around square windows surrounded by cement panel borders. Mesh guard rails with black metal frames embellish the residential balconies.

“We have larger units that you might typically find in a bigger project in terms of square footage, bedroom size and storage,” offered Joe Hernon, manager of The Hernon Group. “I like the architecture and design as it emphasizes the open space component that’s for use by residents. There’s also bike storage and generally more room in the units, in addition to a very nice roof deck that’s landscaped and furnished. I’m really looking forward to developing this property and improving the site.”

The property is located across the street from Mosswood Park and just west of the Kaiser Foundation Medical Center on Broadway. It’s surrounded by a mix of residential, churches and hotels and has access to both Interstates 580 and 980. The MacArthur BART station is a half-mile away.

“I really like the neighborhood and park and it’s in close proximity to BART,” said Hernon. “I feel it’s a strong location in between upper Broadway, Kaiser and the park. We hope to break ground before the end of the year.”

The project is considered an urban infill development and qualifies for streamlined CEQA review. If approved by the Planning Director following the public notice period, 18 months of construction could begin later this year.