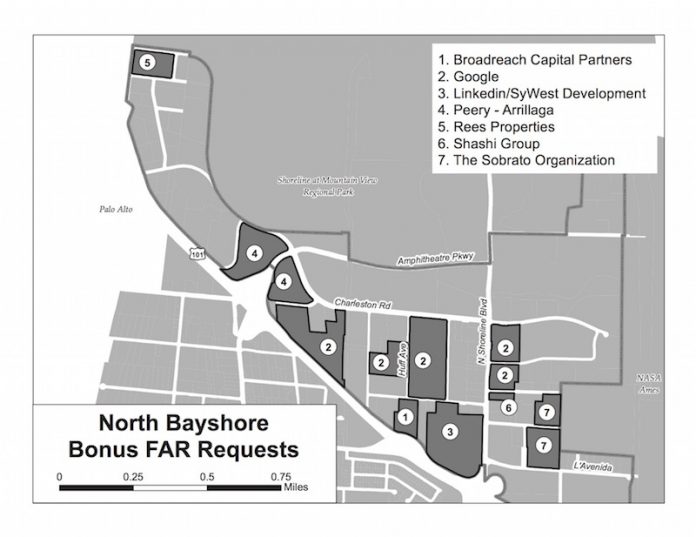 Mountain View City Council’s decision on Tuesday to allocate the majority of the 2.2 million square feet of commercial space left under its North Bayshore Precise Plan to LinkedIn Corp. left some proposals—most notably Google Inc.’s vision for a grand new campus—with little or no space. But it does not necessarily mean the other plans will not come to fruition, councilmembers said.

“There’s a temptation to have headlines that say ‘Mountain View snubs Google in favor of LinkedIn,’” said Councilmember Chris Clark. “That wasn’t the message we were trying to send.”

While Mountain View-based Google wanted all of the allotted commercial space to build an innovative four-building campus, it wound up with 515,325 square feet for its Landings development at 10 and 20 Landings Drive. Clark said that building was chosen in part because Google identified it as part of its plan’s first phase, so providing space for it could encourage Google to begin its project.

“We know the City Council had a tough decision to make [Tuesday] night and thank them and our community for more than six hours of debate,” said David Radcliffe, Google’s vice president of real estate and workplaces services, in an e-mailed statement. The company “will continue to work with the city on Google’s future in Mountain View,” he added.

Some members of City Council, which voted 4-3 for the allocations, liked the LinkedIn proposal because it helps keep diverse companies in North Bayshore, Clark said. Also, the Mountain View-based company assembled parcels for its project at a district gateway at Shoreline Boulevard and Highway 101, designated as a high-density area.

Councilmember Lenny Siegel added that LinkedIn “has been surrounded by Google, with no room to grow,” and the company “convinced councilmembers that its deal was tenuous, subject to collapse if faced with a delay.”

However, Siegel said he opposed LinkedIn’s proposal because it will bring more than 8,000 office and retail jobs “but no housing.”

City Council is now studying six areas in North Bayshore for possible residential use. The precise plan, adopted in November, does not allow residential units.

Google’s proposal is still possible, Clark said. “We aren’t slamming the door on their proposal. It really came down to the numbers last night and the council struggling to [allocate space],” Clark said.

Among Google’s options are for City Council to revise the precise plan. “The Council can modify the precise plan, but the environmental impact report process will take time—more than a year,” Siegel said. “It’s also possible that one of the other projects may fall through or fall short.” Razing existing older office properties and replacing them with housing also could put some office space back into the pool, Clark said.

Palo Alto-based Broadreach Capital Partners was allocated 123,479 square feet for a six-story office building at 1625 Plymouth St. Company officials at the City Council meeting revealed that its tenant would be Google.

Rees Properties, based in Mountain View, was allotted 102,248 square feet for a three-story office building at 2629 Terminal Boulevard.

The Shashi Group also was given the nod to move forward with plans to build a five-story 200-room Aloft hotel at 1625 N. Shoreline Boulevard.

A proposed office-and-residential project at 1255 Pear Avenue and 1305 Space Park Way by the Cupertino-based Sobrato Organization was not allocated any square footage. It may be able to gain space via a “gatekeeper” request, which will require it to mitigate traffic impacts and conduct its own environmental impact report, Clark said. Palo Alto-based Peery Arrillaga’s application for two six-story office buildings at 1945 Charleston Road and 1501 Salado Drive also did not receive any space allocation.

Most of these projects were part of Mountain View’s Bonus Floor Area Ratio proposals, which require higher densities than are allowed under its recently adopted North Bayshore plan. Bonus FAR projects require companies to tack sustainable measures, transportation improvements or community benefits onto their proposals. Cupertino-based Shashi Group’s project did not fall under the Bonus FAR program because hotels are not counted under the office cap.

Receiving space allocations does not mean a project is approved. The companies now can present City Council with formal proposals and apply for planned community permits.